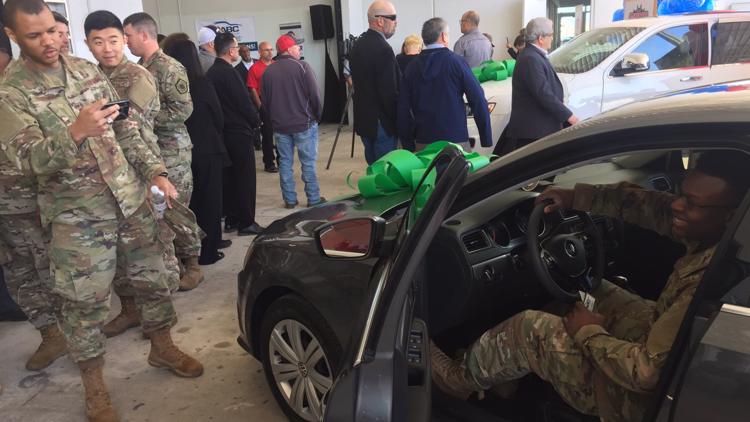 According to a press release, the insurance companies provided the vehicles, the team at Gunn fixed them up, and on Friday they gave these families the gift of mobility and independence.

Wish For Our Heroes is a nonprofit dedicated to helping with everyday needs for veterans and active duty military families, and they selected the three deserving recipients.

Growing up in Chicago, U.S. Air Force Senior Airman Dontai Marcus never needed a car until he moved to Texas. Now he has a 2017 Jetta to get around town.

Army Sgt. Mitchell Boteler is a single father who served three tours in Iraq. He'll use his 2018 Nissan Altima to take his young sons to their daily tutoring and weekly counseling.

Mary Crowell received a 2015 Jeep Grand Cherokee. Her husband, Army Veteran Cpl. Jacob Crowell, struggled with PTSD for years before suffering a traumatic brain injury in a suicide attempt. Mary and their three kids have been living at Fisher House San Antonio while he's being treated in a trauma unit.

"We truly appreciate our military and their families for the many sacrifices they make so we can live in a free country," said Sean Gunn, CEO of Gunn Automotive Group. "We are honored to provide these three military families with dependable transportation.”

RELATED: 'You make me feel like I am somebody': World War II veteran turns 100