What happens if Trump can't perform his duties? Who else may have been infected? 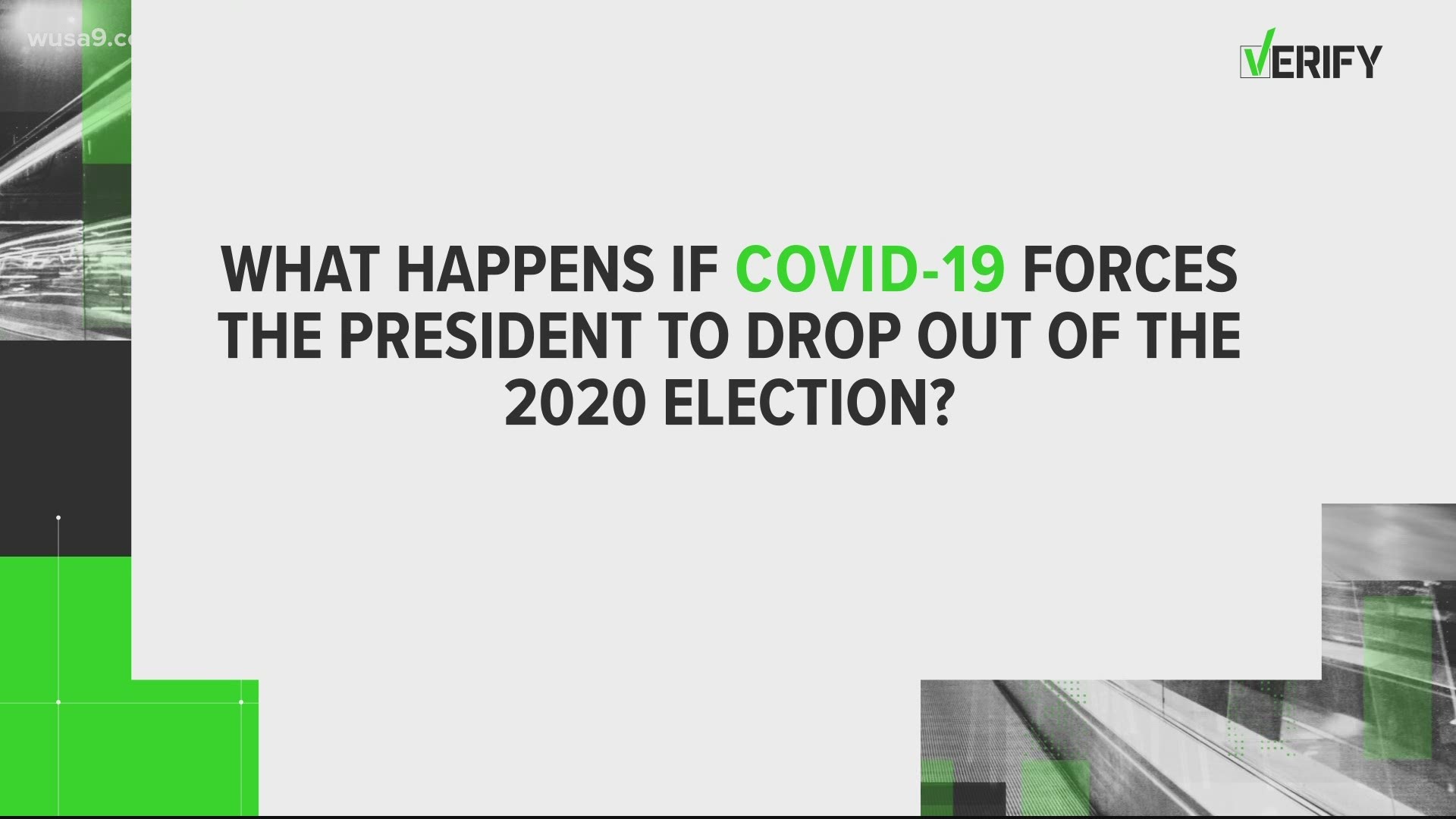 How severe are Trump's symptoms?

Trump was last seen by reporters returning to the White House on Thursday evening and did not appear visibly ill.

Trump will spend a “few days” at a military hospital after contracting COVID-19, the White House said Friday. A White House official said the visit was precautionary and that Trump would work from the hospital’s presidential suite, which is equipped to allow him to continue his official duties.

Earlier Friday the White House said Trump remains “fatigued” and had been injected with an experimental antibody cocktail for the virus.

Trump is 74 years old, putting him at a higher risk of serious complications from a virus that has infected more than 7 million people nationwide. He may or may not develop more severe symptoms later.

RELATED: President Trump tests positive for COVID-19; Here is a list of symptoms from the CDC

What happens if Trump can't perform his duties?

The positive test and his move to the hospital raises questions about what would happen if he were to become incapacitated due to illness.

The Constitution's 25th Amendment spells out the procedures under which a president can declare themselves "unable to discharge the powers and duties" of the presidency. If he were to make that call, Trump would transmit a written note to the Senate president pro tempore, Republican Sen. Chuck Grassley of Iowa, and House Speaker Nancy Pelosi, D-Calif. Pence would serve as acting president until Trump transmitted "a written declaration to the contrary."

NBC White House reporter Peter Alexander tweeted Friday evening that, according to a White House official, Trump had not transferred his powers to Pence.

"Vice President Pence remains in good health and wishes the Trumps well in their recovery," he added.

Regardless, the aforementioned scenario about a possible transfer of power means the health of the 60-year-old is also top-of-mind. Beyond just the fact the pair are campaigning for a second term in office, the health of both the president and vice president is a national security issue.

The Commission on Presidential debates, which puts on the event, said Wednesday's vice presidential debate between Pence and Democratic nominee Sen. Kamala Harris is set to go on as scheduled.

Karen and I send our love and prayers to our dear friends President @realDonaldTrump and @FLOTUS Melania Trump. We join millions across America praying for their full and swift recovery. God bless you President Trump & our wonderful First Lady Melania.

Democratic presidential nominee Joe Biden and his wife, Jill, both tested negative for COVID-19 Friday. Biden spoke at an event in Grand Rapids, Mich., Friday afternoon, wearing a mask even though the event was outdoors and he was socially distanced from the sparse crowd.

Trump's diagnosis may put the final two presidential debates in limbo. The standard quarantine period is 14 days. The next debate is Oct. 15, which is barely within that window. It's possible the debates could be done remotely, be postponed or be canceled altogether. As of Friday afternoon, it was not clear what would happen.

Multiple reports citing the Biden campaign said Friday that the campaign would be pulling its negative "contrast" ads for the time being.

RELATED: Timeline of Trump's busy week before announcing he has COVID-19

Who else may have been infected?

Trump's announcement came hours after he confirmed that Hope Hicks, one of his most trusted and longest-serving aides, had been diagnosed with the virus Thursday. Hicks began feeling mild symptoms during the plane ride home from a rally in Minnesota on Wednesday evening, according to an administration official who spoke on condition of anonymity to disclose private information. She was isolated from other passengers aboard the plane, the person said.

It's not clear when Hicks was exposed or if she's at the start or end of the 14-day incubation period.

MSNBC anchor Ayman Mohyeldin tweeted a list of people who may have been in contact with Hicks in the 48 hours before the news of her diagnosis. They include all four of Trump's adult children and their families, White House Chief of Staff Mark Meadows, Trump personal lawyer Rudy Giuliani and Alice Marie Johnson, the former federal prisoner who Trump pardoned.

Dr. Vin Gupta with the Institute for Health Metrics and Evaluation at the University of Washington told MSNBC Friday morning that anyone who was aboard that flight with Hicks should immediately quarantine, even if they test negative, and need to undergo contact tracing.