Democrats win House: So what happens next?

Trump's taxes. The Mueller investigation. Immigration. The Supreme Court. What does Democrat control of the House mean for the next two years? 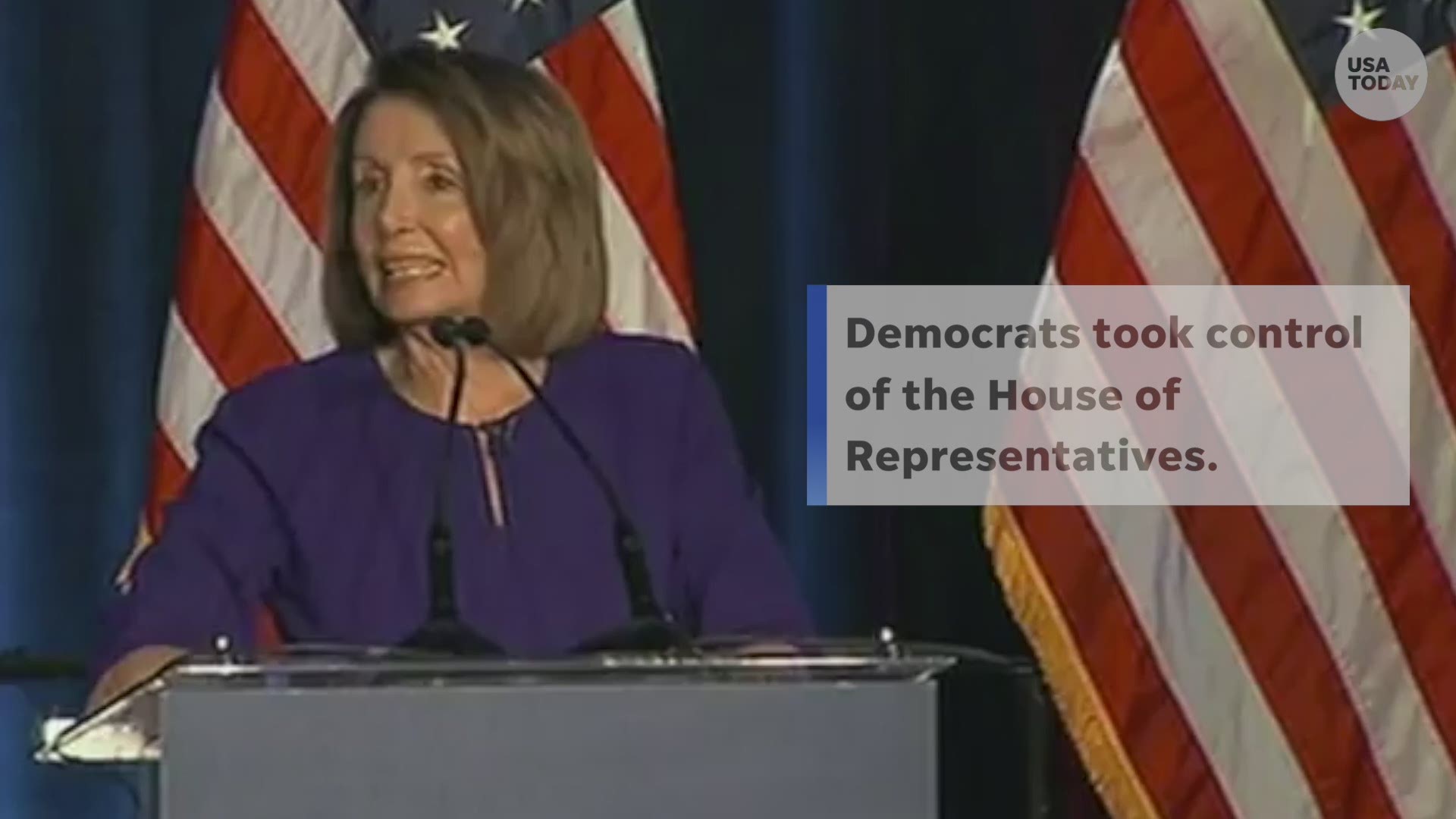 Democrats regained the majority in the House of Representatives in Tuesday night's midterm elections. It's the first time since 2012 that Democrats will control either chamber of Congress. That creates a slew of new problems for President Donald Trump, both politically and legally.

Here are seven things to watch as the new Congress begins and we start the push to the 2020 presidential election.

All Democrats needed to gain subpoena power was a one-vote majority, so expect them to start taking a close look at Trump on several fronts, from his relationship with Russia to his taxes.

"You’re definitely going to see a culture of investigation because there is just a lot of pent up rage for Democrats eager to investigate the administration," said Susan Page, USA Today’s Washington Bureau Chief.

The House Intelligence Committee could reopen its investigation into Russian interference in the 2016 election. The committee ended its probe in March with the GOP not only saying there was no collusion but also contradicting U.S. intelligence findings on Russian interference. Democrats, not surprisingly, disagreed. Now they will be able to take a second look.

Democrats may also investigate Trump's elusive tax records, searching for anything illegal in the president's past business dealings. Trump has refused to release them, often citing that he is under audit. But under a 1924 law, members of Congress can request tax returns for investigation. But don’t expect it to happen quickly as legal challenges are likely, Reuters reports.

Democrats could also look into whether Trump is benefiting financially from sitting in the Oval Office. The emoluments clause in the Constitution states, “No Person holding any Office of Profit or Trust under them [the United States], shall, without the Consent of the Congress, accept of any present, Emolument, Office, or Title, of any kind whatever, from any King, Prince, or foreign State.”

Democrats may also look at what the Environmental Protection Agency and the Department of Interior have been up to, said USA Today’s Page. Interior Secretary Ryan Zinke is currently under an ethics investigation to determine if he has personally benefited from his position.

Those investigations mean Trump may be less likely to shut down Robert Mueller’s probe into Russian interference in the 2016 elections, if that was on his mind.

"(Democrats) will just be in a position to do a lot of things that really put the White House on the defensive," Page said. "And, in that case, I think... President Trump is going to have other problems other than trying to fire Robert Mueller."

Shana Gadarian, a political science associate professor at Syracuse University, indicates there may be people pressuring Trump from both inside and outside The White House to not interfere. Even if Mueller makes a direct link to the president, Trump has worked to delegitimize the probe’s findings over the past two years.

“All of this language about fake news and ‘you can’t trust the FBI,’ all of that is setting up a scenario where the Mueller investigation comes out and (Trump) says ‘it’s not to be believed’ and that Mueller is just working for the Democrats,” said Gadarian.

As part of a potential Mueller shutdown, keep an eye on Attorney General Jeff Sessions. Trump was not happy that Sessions recused himself from the Russia investigation, which ultimately led to Deputy Attorney General Rod Rosenstein appointing Mueller as special counsel. Sessions could get the axe, and Sen. Lindsey Graham from South Carolina could be his replacement. Graham was a vocal Trump critic during the 2016 campaign but is now one of his strongest allies.

As for when the Russia investigation will end, that’s anyone's guess. But, there is this nugget from former federal prosecutor Nelson Cunningham. He wrote in Politico on Oct. 31 that there are indications Mueller may be laying the groundwork to subpoena Trump.

Will Democrats and Trump be able to work together?

Trump and Republicans were able to do just about anything without needing input or support from Democrats. Now, that changes. So, will this be a “do nothing” Congress?

In a recent interview, University of Maryland political science professor Frances Lee suggested that because elections happen every two years, the party that is not in power has less of an incentive to make deals.

"So they think, 'Why compromise now if my party might win back power after the next election, allowing us to dictate the terms and the outcomes?' So the out-party prefers to wait — hence the continuous kicking-of-the-can that we complain about in American politics, in which the major issues don’t get addressed or resolved," Lee said.

Still, Page said Trump told her he is hopeful to get some big legislation passed with Democrats, such as an infrastructure bill.

"Republicans are not excited about spending taxpayer money on the infrastructure bill. Democrats are. Trump said that would be fine with him, he would be in favor of an infrastructure bill that’s publicly funded. So you might find progress on some issues," Page said.

The 112th Congress, which served from 2011-2012 -- the second half of Barack Obama's first term – was the least productive Congress of the last 44 years. It passed 284 bills that became laws. That Congress was split, just as this next one will be.

Justice Ruth Bader Ginsburg is 85. Justice Stephen Breyer is 80. While neither has indicated they are ready to retire, anything can happen.

Democrats have the House, but the power to confirm justices remains with the Republican-controlled Senate. Another conservative on the court would give them a 6-3 majority. If that happens, both the right and left will wonder about the future of Roe v. Wade, the 1973 ruling that legalized abortion under the 14th Amendment.

There is virtually nothing Democrats can do to stop it, although they got close over the summer with Brett Kavanaugh.

Had Democrats won the Senate Tuesday, they may have had the opportunity to do what Senate Majority Leader Mitch McConnell did in early 2016 after the death of Justice Antonin Scalia – stall. McConnell announced within an hour of Scalia's death that the Senate would not consider President Barack Obama's nominee until after the presidential election. Trump won, and Neil Gorsuch ended up on the court.

What is next for immigration?

Trump claimed in an interview with Axios last week that he can end birthright citizenship, protected by the 14th Amendment to the Constitution, with an executive order. The amendment states, “All persons born or naturalized in the United States, and subject to the jurisdiction thereof, are citizens of the United States and of the State wherein they reside.”

Initial reaction was that the president can't undo the Constitution with the stroke of a pen. But debate surfaced over the words “and subject to the jurisdiction thereof” and whether that is a legal loophole that would remove that protection for children born to illegal immigrants.

Expect this to make its way through the court system, with the final interpretation ultimately resting with the Supreme Court.

Apart from birthright citizenship and whether Trump's border wall will be fully built, other immigration issues still need to be addressed after Tuesday night.

The status of hundreds of thousands of immigrants continue in limbo after Trump cancelled their Temporary Protection Status (TPS), which has allowed immigrants from disaster-ridden or war-torn countries to live in the United States legally and protected from deportation.

In early October, a federal judge ordered the Trump administration to temporarily halt its plan to end the program. However, the injunction is only temporary and immigrants are still unable to renew their TPS status.

The same can be said for the Deferred Action for Childhood Arrivals (DACA), which Trump also tried to overhaul. Recently, the Justice Department has urged the Supreme Court to consider the plan to end the Obama administration program that protects undocumented immigrants brought to the U.S. as children.

What is the future of Obamacare?

Democrats passed the Affordable Care Act eight years ago despite opposition by Republicans. Late in the 2018 midterm campaign, however, Republicans made the case that they were the party of healthcare. They insisted they would protect coverage for people with pre-existing conditions – a key provision of Obamacare – even though the GOP has tried to repeal the law.

Trump made the claim loud and clear on Twitter.

Republicans will totally protect people with Pre-Existing Conditions, Democrats will not! Vote Republican.

Senate Majority Leader Mitch McConnell hinted last month at trying to overturn the law in an interview with Reuters.

“If we had the votes to completely start over, we’d do it. But that depends on what happens in a couple weeks…. We’re not satisfied with the way Obamacare is working," McConnell said.

That seems unlikely as long as Democrats control the House. They are also likely to push back at efforts to curtail so-called entitlements such as Medicare, Medicaid and Social Security – things also likely to be on McConnell’s hit list.

Will the middle class get another tax cut?

Less than a month before the midterm elections, Trump floated the idea of Congress passing a 10 percent tax cut aimed at the middle class. He indicated it could happen in a matter of days, even though Congress was not in session.

Trump somewhat backtracked on that last week, but indicated it would be something the GOP pursues in 2019 when the new Congress is in session.