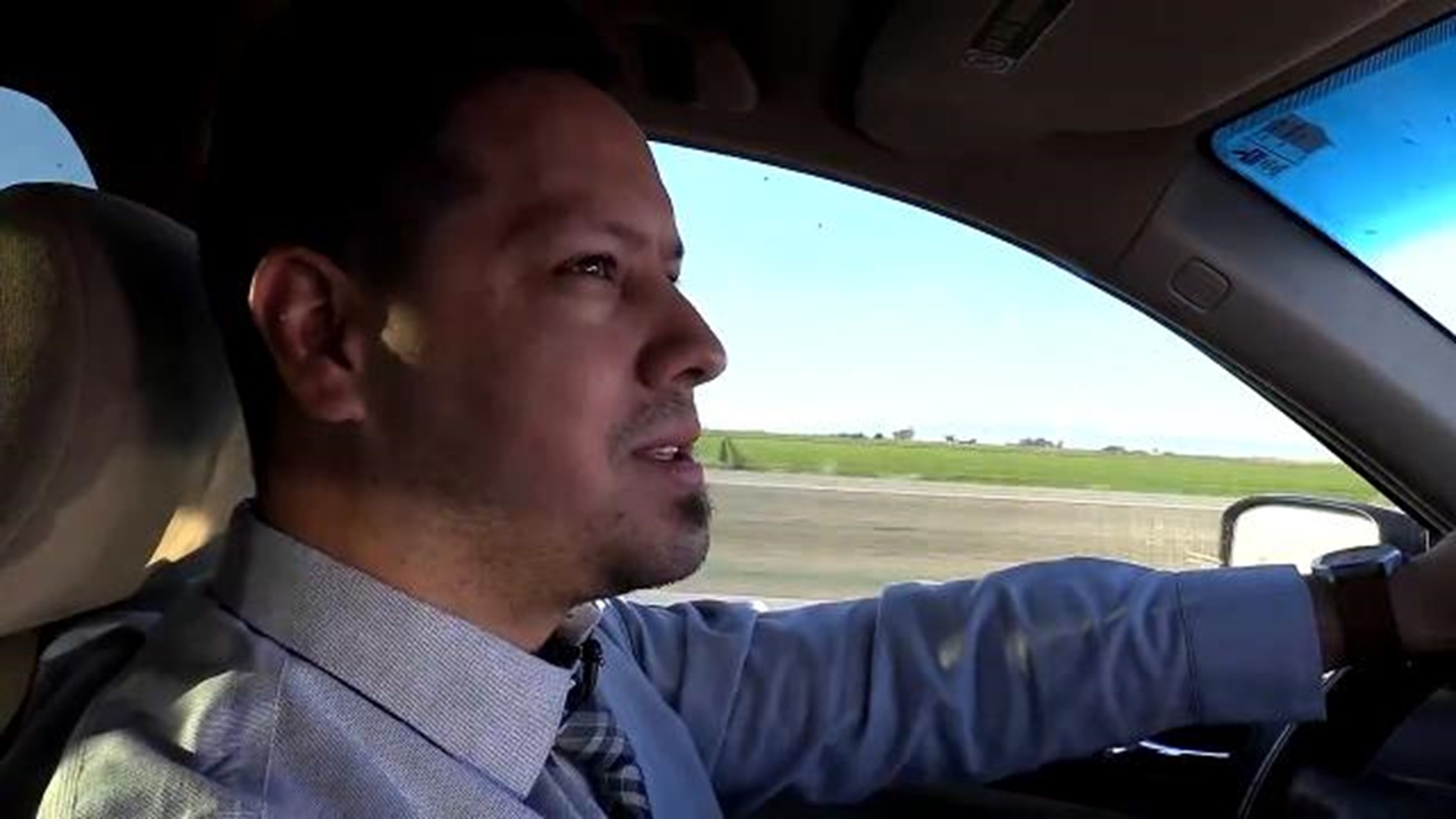 Credit: Tom Tingle/The Republic
After six years in the Yuma Union High School District without a single pay raise, Rene Castillo, 34, found that he could double his pay to nearly $80,000 by teaching in California. In total, about 730 Arizona educators left each year between 2014 and 2016, with California accounting for more than half of the defections.

YUMA, Arizona — It's inching toward 6:30 a.m. as Rene Castillo steers his Honda Accord onto Interstate 8, a radiant sunrise in his rearview mirror as he begins his daily commute.

Castillo grew up here. Graduated from Yuma High School. And after earning his degree, he came home to teach at San Luis High School.

He expected to spend his career there.

But after going six years in the Yuma Union High School District without a pay raise and only minor salary increases in other years, Castillo, 34, began to look elsewhere.

He found that with a one-hour commute he could double his pay, to nearly $80,000.

So each morning Castillo's 12-year-old Honda, with 195,000 miles and shaky brakes, rolls across the Arizona state line, past vegetable and alfalfa crops, through the tiny communities of Felicity and Holtville, to El Centro, Calif., where he teaches history at Southwest High School.

Teacher strikes: Teachers are striking all over. What is going on?

Teachers: Teachers, Oklahoma lawmakers at odds as walkout rolls on

"I didn't want to just do it for the money…But then you realize there are other places that are good, and they make me feel valued. I miss San Luis, but I'm happy where I'm at.

"Now, I'm able to get my brakes fixed. Now, I can afford to not have roommates and be able to pay my rent," said Castillo, who ironically, rents rooms to two Yuma teachers.

Arizona educators increasingly fled the state between 2014 to 2016 for similar jobs in neighboring California, Colorado, Nevada and New Mexico, according to U.S. Census data compiled by The Arizona Republic. (Data for 2017 and 2018 is not yet available.)

The departures followed years of stagnating wages for teachers, making Arizona teachers among the worst-paid in the country. As hundreds of educators have quit in frustration, Arizona schools are hiring under-qualified, inexperienced teachers to fill in the gaps.

In total, about 730 Arizona educators left each year between 2014 and 2016, with California accounting for more than half of the defections. That migration was a nearly 37% increase from the eight preceding years, which saw an average of 534 educators leave Arizona for neighboring states each year, Census data shows.

"It's hard, just really hard to watch. But how do you argue against it?" she said.

Credit: Tom Tingle/The Republic
After six years in the Yuma Union High School District without a single pay raise, Rene Castillo, 34, found that with a one-hour commute he could double his pay to nearly $80,000 by teaching in El Centro, Calif. He walks on campus at Southwest High School on March 27, 2018.

The spike in departures coincided with the first two years of Republican Gov. Doug Ducey's administration.

Now, as Ducey prepares to seek a second term, he faces an outcry over teacher pay as educators hold rallies at the Capitol and staged walkouts aimed at gathering public support to raise school funding. Similar protests in other states have led to strikes.

Teachers have called on Ducey and the Republican-controlled Legislature to immediately raise their pay by 20%.

Ducey has made no indication he'll meet their demands.

Patrick Ptak, Ducey's spokesman, said the governor "believes teachers are the biggest difference-makers out there" and "should be valued and rewarded for their hard work."

In 2018, the median pay for Arizona teachers is $46,949, a 4.6% increase from 2015, or about $2,000 per year. That includes funding from the Ducey-backed Proposition 123, which settled a court ruling that the Legislature had under-funded public schools during the recession.

Teachers protest around the country

1 / 7
Michael Clevenger, Louisville Courier Journal, via USA TODAY NETWORK
Thousands of Kentucky teachers and their supporters rallied at the state Capitol over recent changes that the state legislature made to their pensions on April 2, 2018 in Frankfort, Ky.

Ptak said Arizona teacher pay ranks 43rd in the U.S. and is rising. Teachers, however, dispute those figures, saying Arizona teachers rank dead last or near the bottom in pay on an inflation-adjusted basis.

"The governor's goal is to pass a budget in the next few weeks that continues to increase our investment in public education," Ptak said. "We will continue each year to put more resources into K-12 education to better serve our teachers and students."

But that story is playing out around the state.

The 2014 Coconino Teacher of the Year, Jeff Taylor, recently announced he will leave Flagstaff High School at the end of the year because of low pay and inadequate funding.

“I’m just frustrated because I don’t think things will change in this state and if they do, they won’t change in time to make me stay,” he told the Arizona Daily Sun.

Edgerton said her pay has nearly doubled compared to what she was paid in Arizona, to about $70,000 a year.

"And I still have room to move up," she said. "The cap here is about $100,000 a year….It makes you feel more appreciated. California cares about its teachers.

Read more: Schools in Oklahoma are still closed. Are kids being fed lunch?

Read more: When teachers close the schools in protest, what happens to the kids?

"I went from living paycheck to paycheck, to where now I can buy a house," she said. "With Arizona pay, it never would have happened."

Edgerton said other teachers from Lake Havasu have joined her in making the 40-plus mile commute.

Joe Thomas, president of the Arizona Education Association, said it's disheartening that Arizona is losing good teachers to neighboring states.

Thomas, however, doesn't blame them. Teacher salaries in neighboring states can be "life changing," he said.

1 / 10
Tom Tingle/The Republic
After six years in the Yuma Union High School District without a single pay raise, Rene Castillo, 34, found that he could double his pay to nearly $80,000 by teaching in California. In total, about 730 Arizona educators left each year between 2014 and 2016, with California accounting for more than half of the defections.

'You can either do this, or do well in school'

He made his move to El Centro in late January, as Arizona teachers started publicly protesting their pay.

His brother, Cesar, had recruited him to teach in their hometown in late 2006, right after Rene graduated from Arizona State University with a secondary education degree.

Rene Castillo, one of six children born to migrant farm workers, said his parents, who only attended elementary school, insisted that their children work hard in school or there would be consequences.

He recalled one time when he was doing poorly in his classes, his father pulled the family car over next to a lettuce field. He gave his son a knife and told him to start culling lettuce. The field was muddy and Rene was wearing brand-new shoes.

"My dad put the fear of God in me. He said 'you can either do this, or do well in school,'" Rene Castillo said.

He and his four brothers all earned degrees from ASU. Their sister took advanced courses after graduating from high school.

'You had to do more with less'

Credit: Tom Tingle/The Republic
After six years in the Yuma Union High School District without a raise, Rene Castillo, 34, began to look elsewhere and found that with a one-hour commute he could double his pay, to nearly $80,000 by teaching at Southwest High School in El Centro, California

The brothers built a strong baseball program, with a half dozen of their players earning college scholarships, Rene Castillo said.

Leaving those athletes, he said, was difficult. He cried as he broke the news to them that he was taking the job in California.

But he said there wasn't much financial reward in Yuma. During his decade-plus there, his salary increased by $9,000, to $39,000 a year, despite having a master's degree.

And pay wasn't the only problem.

He said Yuma, like many Arizona districts, suffers from a teacher and substitute teacher shortage. When a colleague was sick, staff members would often fill in because the district couldn't find a sub.

It was also typical for some of his colleagues at San Luis to have 45 students in a class, he said. In California, the class sizes are much smaller.

"To sum it up, you had to do more with less, and you were not compensated," Castillo said.

On most days, he commutes with three other teachers who left Yuma for jobs in El Centro, and he knows of others who have gone elsewhere in California to each.

Thompson, the Yuma superintendent, said she was sorry to see Castillo go. But she understands it.

Teachers will continue to leave until the Arizona Legislature makes a commitment to adequately fund public education, she said.