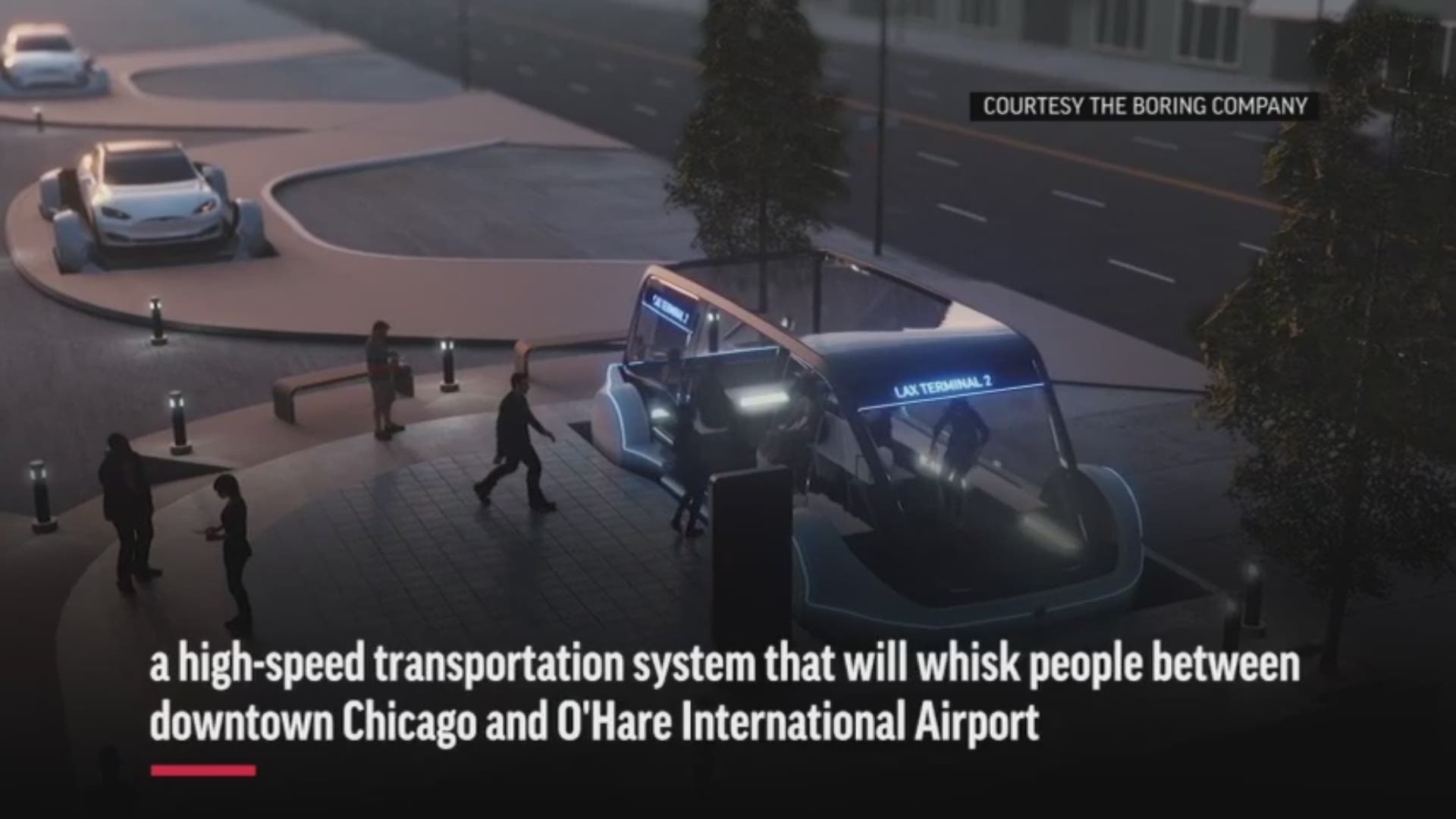 Chicago Mayor Rahm Emanuel announced Thursday that his administration is entering one-on-one negotiations with the Musk company to build the high-speed system that will utilize electric vehicles running through twin underground tunnels.

If Emanuel and Musk, who is also the CEO of electric-car company Tesla, are able to reach a final deal, it would then need approval from Chicago’s city council.

The proposed system would transport passengers between O’Hare, one of the nation’s busiest airports, and downtown in 12 minutes, according to the Boring Company's proposal. Currently, it takes passengers riding the city’s train system about 45 to 50 minutes to make the roughly 16-mile trip between downtown and O’Hare. Taking a taxi or ride-share can take even longer.

"It will take longer to get through security at O’Hare than it will take to get to O'Hare," Emanuel predicted. "This is the fast lane to Chicago’s future."

Boring Company says it will pay the entire cost of building the system.

The company indicated in its proposal to the city that fares on its transportation system of the future –  although not yet set –  would cost more than the current $5 fare between O’Hare and downtown but less than the cost of a cab ride, which typically costs about $40.

The deal puts Musk a step closer to making his Boring Company's vision a reality. Mass transit advocates have expressed skepticism about the viability of a vast network of underground tunnels due to high costs and bureaucratic hurdles. But Musk’s tentative deal with Chicago suggests that his company may be making progress in its goal to reduce the price of tunnel digging while increasing the speed of the notoriously slow process.

“I think if you look at someone’s track record or a company’s track record…it’s reasonable to extrapolate into what it would do in the future,” Musk said  about criticism of the effort. “I’ve done a few things in my background that I think are pretty tricky.”

Musk added: "If it succeeds it will be a great thing for the city. If it fails, me and others will lose a whole bunch of money."

The Boring Co. in April said it raised $113 million, mostly from Musk himself.

This foray into building tunnels for high-speed transportation is relatively new. The Boring Company was launched about 18 months ago and has been digging a test tunnel in Los Angeles for a high-speed public transit system called the Loop.

The concept behind the Loop has changed over the months. Most recently, Musk said that it no longer would provide the skates for cars to race beneath the surface but instead will focus on transporting pedestrians and cyclists.

In an animation released by the Boring Company in March, pedestrians are shown on the street surface boarding buses and being lowered into the tunnel by an elevator system.

Musk has also received approval from Maryland to dig tunnels for a Loop system that would provide a transportation alternative to commuters in the Baltimore-Washington corridor, but work has not yet started on that project.

The futuristic-looking electric skates – battery-powered, zero-emission vehicles – are modeled after the Tesla Model X SUV, according to Boring Company. The O’Hare line, which has been dubbed the Chicago Express Loop, would use a concrete track within the tunnel, and passenger-carrying skates will be able to travel at speed up to 150 miles per hour.

Each electric skate features a climate-controlled cabin, luggage storage space and Wi-Fi. Boring Company projects that the system will run up to 20 hours per day, seven days a week with electric skates departing as quickly as every 30 seconds.

Each electric skate could carry eight to 16 passengers or a single-passenger vehicle, according to a Boring Company fact sheet.

Chicago’s requests-for-proposal for a high-speed transit system called for bidders to include plans for downtown and O’Hare stations. The RFP also called for designers to build a system that could provide travel times of 20 minutes or less with no more than 15 minutes between train departures for most of the day. The city also called for fares to be less than the cost of current taxi and ride-share services.

Boring Company's push hinges on cutting the cost of building tunnels – currently construction costs up to $1 billion per mile – and marrying it with electric-vehicle technology. It hopes to lower the costs of tunneling in part by narrowing the diameter of tunnels for such high-speed projects.

The effort has been met with some skepticism from experts.

"The concept of car elevators on skates add a bunch of engineering challenges, such as reliability and safety of the elevator, loading and unloading times, and the number of dedicated areas in a city you'd need to do this at scale," Constantine Samaras, assistant professor of civil and environmental engineering at Carnegie Mellon University, told "Forbes" earlier this year.

1 / 17
CRAIG BAILEY/FLORIDA TODAY VIA USA TODAY NETWORK
Elon Musk CEO of SpaceX, speaks to the media during a press conference after the Falcon Heavy Launch on Feb. 6, 2018.