Protests initially centered around Dallas City Hall, but demonstrators made their way across the downtown core and nearby areas over the course of the evening. 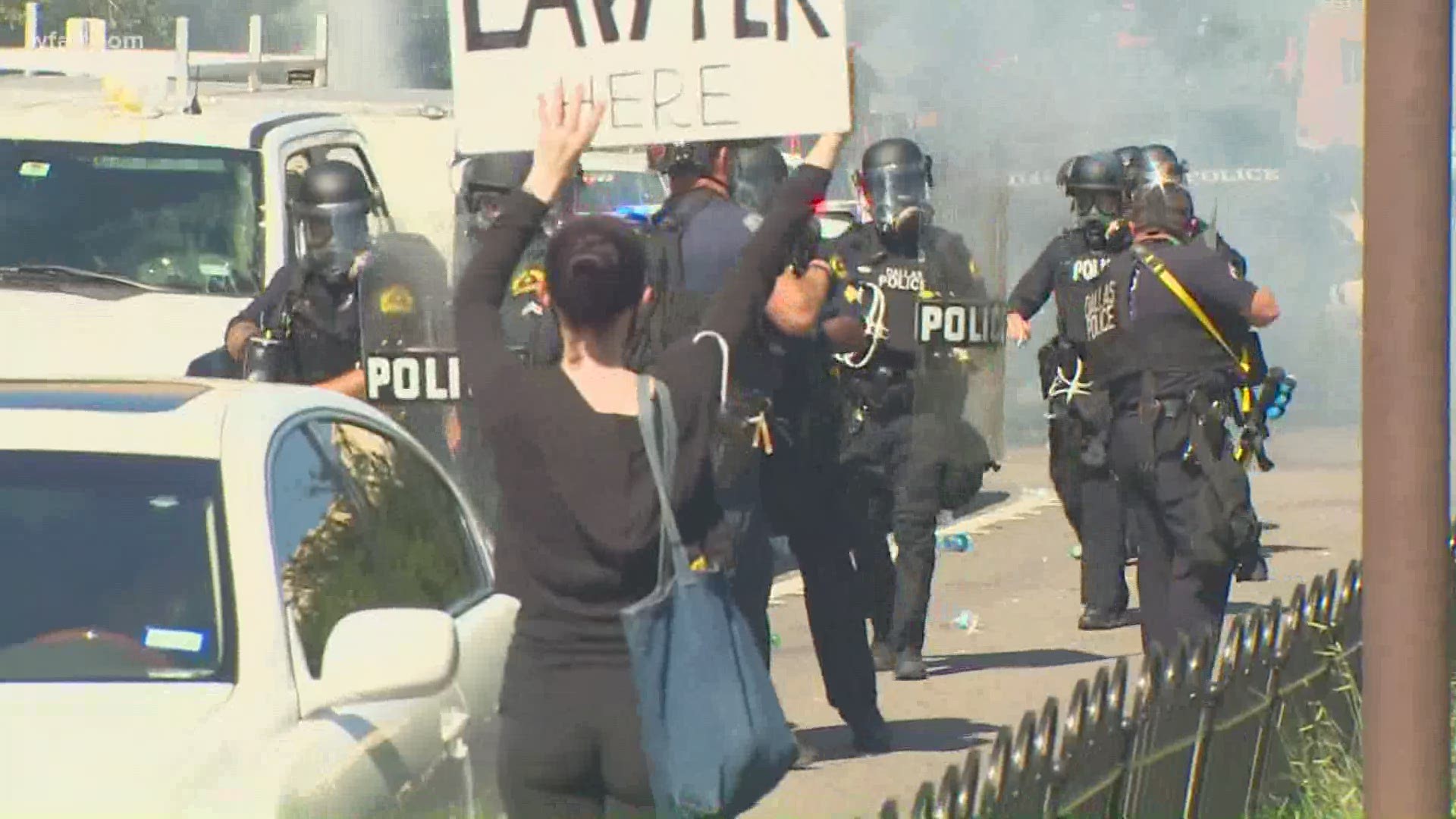 This story will be regularly updated with new information.

Protests that initially had been peaceful took a turn Saturday afternoon as protesters clashed with police, vandalized property, and, in some cases, looted.

Just before 11 p.m., Dallas police said 74 people had been arrested in incidents downtown, with the largest group -- 36 individuals -- arrested at 1500 Young Street.

Another 15 people were taken into custody just after midnight on Sunday for allegedly vandalizing buildings. Officers also recovered three guns and a taser near Field Street and Woodall Rodgers Freeway.

The clashes between protesters and police officers continued through the evening, as state troopers and Irving police joined Dallas officers in trying to control the crowds.

Initially, about 700 protesters took to the streets of downtown Dallas on Saturday in response to the deaths of George Floyd in Minneapolis and Breonna Taylor in Louisville. Police officers were involved in both of their deaths.

Hundreds had turned out on Friday as well to express their frustration, and a small group of demonstrators turned violent later in the night.

Mayor Eric Johnson, Dallas Police Chief Renee Hall and several pastors called for "peace and calm in anticipation of more protests this weekend," at a news conference early Saturday afternoon before the second round of protests began.

Recap of the day's events:

12:25 a.m.: Dallas police say they detained 15 individuals for vandalizing buildings near Field Street and Woodall Rodgers Freeway. They recovered three guns and a taser during the incident.

10:45 p.m.: Dallas police said 74 arrests have been made so far on Saturday. All of them are expected to face charges of inciting a riot.

Arrests were made at the following locations:

9:55 p.m.: DART has suspended all bus and rail service into and out of downtown Dallas for the day due to civil unrest.

9:40 p.m.: Damage including broken windows was reported at Whole Foods, The Ritz and the Rolex Building in Dallas' Uptown neighborhood.

9:25 p.m.: Dallas-Fire Rescue confirms crews have responded to 25 calls for service that were associated with the protests in and around downtown Dallas. One person was transported to a local hospital.

9:15 p.m.: Dallas police say about 100 protesters are blocking I-35E northbound near the Commerce exit. Police say they are no longer on the freeway and traffic has resumed.

9:10 p.m.: Dallas police say over 150 protesters looted a cigar and donut shop at the intersection of Elm and Lamar Streets. Officers are searching for suspects.

9:00 p.m.: Target announces it will close six Dallas locations in response to the protest over George Floyd and to keep employees safe. Click here for the full list.

8:30 p.m.: After being pushed off the freeway, protesters made their way back onto I-35E at Commerce Street.

8:20 p.m.: Dallas police say protesters have shut down the north and southbound lanes of I-35E at Continental Avenue. Traffic is at a standstill. 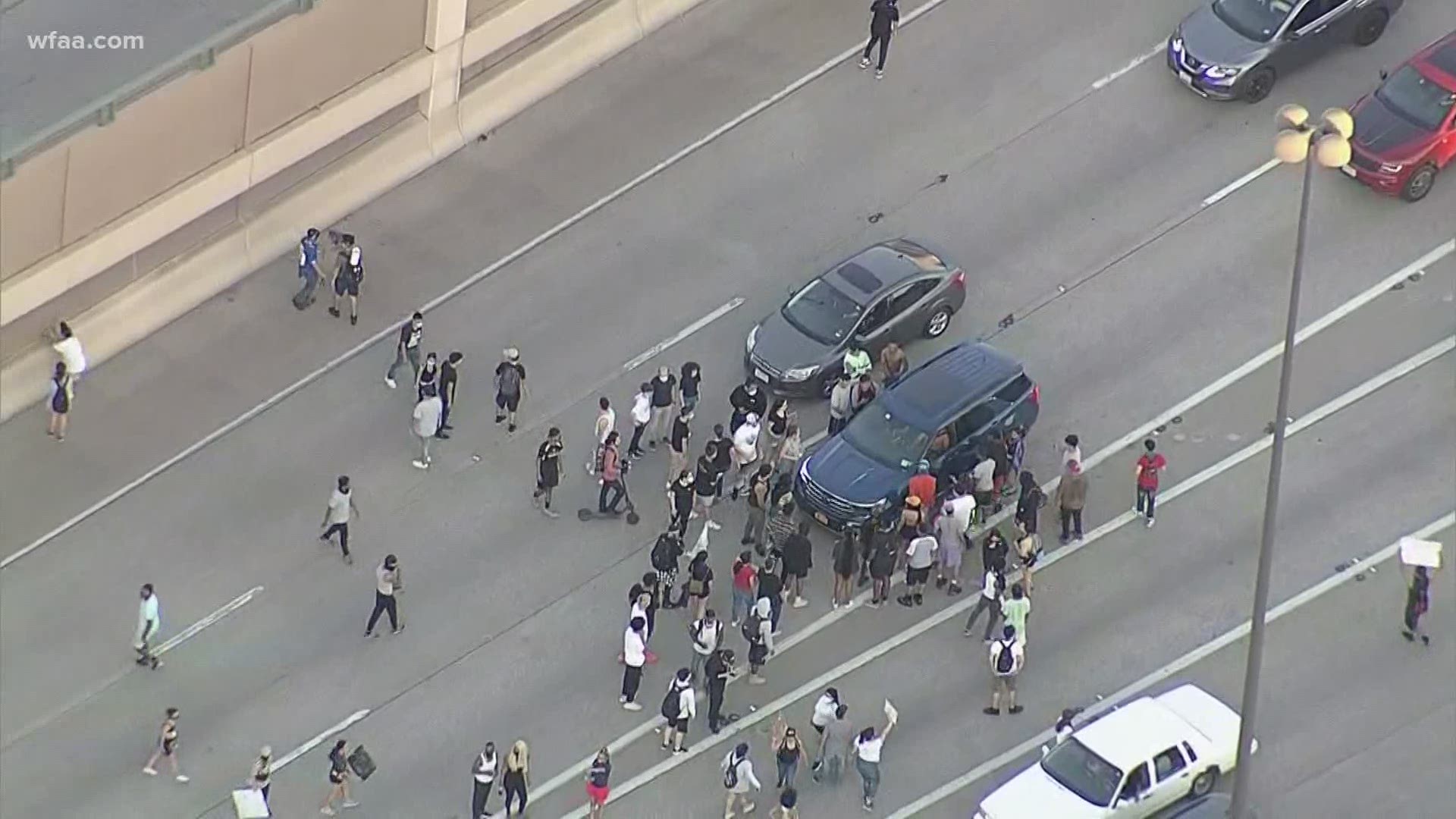 7:40 p.m.: In addition to his earlier announcement of sending DPS to cities like Dallas, Austin, and Houston, Gov. Abbott has also activated the Texas National Guard in response to protests across the state.

"Texans have every right to exercise their First Amendment rights, but violence and looting will not be tolerated," he said.

7:35 p.m.: The City of Dallas advises drivers to take an alternate route after demonstrators have gathered at the intersection of Griffin and Young Streets in downtown.

7:25 p.m.: The sheriff’s office says deputies assisted Dallas police when the protesters attempted to shut down the freeway, and after a county building was damaged.

7:00 p.m.: Hundreds of protesters are marching down Commerce Street back towards Dallas City Hall. The crowd has appeared to have grown in size.

6:50 p.m.: Protesters have gathered on an entrance ramp to Interstate 45 at Commerce Street.

6:30 p.m.: Dallas police said the crowd had grown to about 300 demonstrators, with some members throwing rocks near Griffin Street and Main Street. A tactical vehicle could be seen driving down Young Street amidst a heavy police presence. 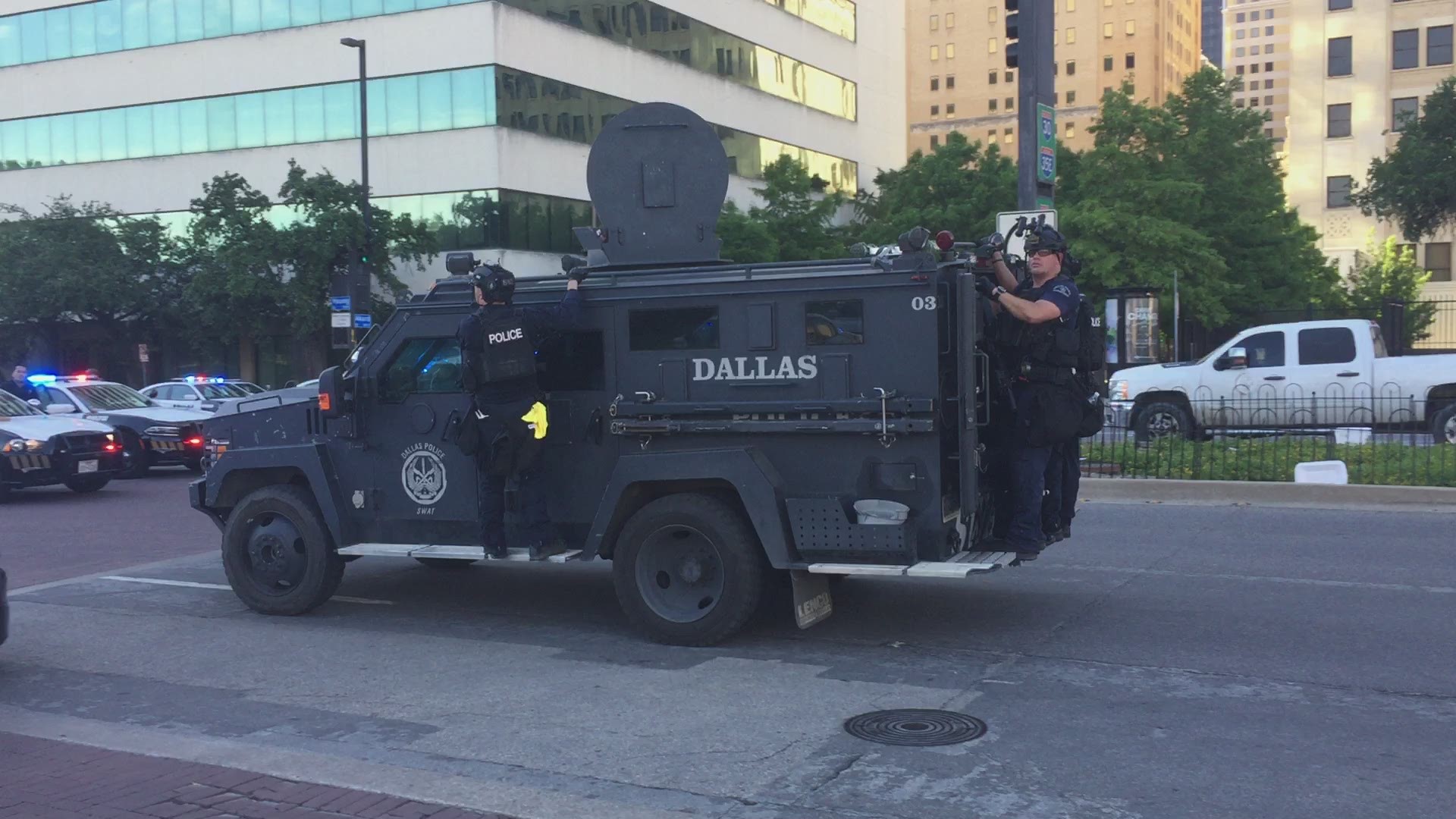 6:20 p.m.: Dallas police launched what appeared to be tear gas canisters at protesters and members of the crowd threw various items back towards police near Griffin Street and Young Street.

5:55 p.m.: At least one protester has been taken into custody, Dallas police said. About 150 protesters are still demonstrating at the corner of Young Street and Field Street.

5:45 p.m.: Dallas police said both the Galleria Dallas and NorthPark Center malls were closed due to threats of looting on social media.

5:20 p.m.: Protesters continue to peacefully demonstrate in front of a police line near Dallas City Hall, WFAA reporter Tiffany Liou said. On the other side of the building, near the intersection of Akard Street and Canton Street, a protester appeared to have been hit by a non-lethal round, WFAA reporter Eric Alvarez said. He got up and did not appear to be seriously injured.

5:10 p.m.: A separate protest is planned for 6 p.m. Saturday in Fort Worth in front of the Tarrant County Courthouse. United my Justice, the group involved in the event, plans to begin the protest there before marching through the streets.

5 p.m.: Dallas police continued to appear to use flash bangs to disperse crowds near Dallas City Hall. A separate small crowd continued to demonstrate in front of a police line on the other side of the building. A large American flag appeared to have been set on fire behind the protesters.

4:30 p.m.: Police have set off multiple flash bangs to disperse the crowd, WFAA Tiffany Liou reports, after police said several squad cars were damaged. A tactical team deployed "gas" to disperse the protesters, which Liou experienced during a Facebook Live.

4:10 p.m.: A spokesperson for Galleria Dallas said the mall has gone on full lockdown due to the protests and no one will be allowed on the property.

4 p.m.: The protest has returned to Dallas City Hall and one Department of Public Safety vehicle was spray-painted, Dallas police said, but the protest has remained otherwise peaceful.

3:30 p.m.: Protesters have blocked Main Street and Lamar Street in downtown Dallas. Traffic has come to a "gridlock" in the area, Dallas police said, but the protest remains peaceful.

3:15 p.m.: A second protest that began in front of Dallas City Hall at 3 p.m. has about 700 protesters, officials said. They are marching north on Akard Street and turning west onto Main Street in downtown Dallas, where many have taken a knee in the middle of the street. Dallas police said protests have been peaceful so far.

3 p.m.: Both Highland Park Village and the Galleria mall posted to their social media accounts to say the shopping centers would be closed for the day "in an abundance of caution" and "in order to preserve public safety," respectively. Neither, however, clarified if that was due to the protests.

2:45 p.m.: Protesters walked about a mile and a half, WFAA reporter Tiffany Liou said, in an act of peaceful protest before returning to Dallas City Hall. People chanted "no justice, no peace," "I can't breathe" and "black lives matter" as they made their way through the city.

2:15 p.m.: NorthPark Center officials said the mall has been closed "out of an abundance of caution" at the recommendation of Dallas police after protesters announced they planned to have a car caravan protest in the area this afternoon. Police officers and additional security will be at the mall.

1:25 p.m.: A protest began outside Dallas City Hall, where hundreds could be seen gathering in front of the building. Protesters held signs with messages like George Floyd's quote "I can't breathe" and "A black man was lynched."

The Dallas Alliance Against Racist & Political Repression organized the rally, which began with a "socially-distanced protest" in front of Dallas City Hall. That event also focused on calling for justice for Atatiana Jefferson, who was shot and killed by a Fort Worth police officer inside her home in October. The officer, Aaron Dean, has since been indicted on a murder charge in her death.

RELATED: Who was Atatiana Jefferson? Woman killed by Fort Worth police officer in her home

PHOTOS: Protesters gather for a second straight day in Dallas in response to George Floyd's death

1 / 27
Eric Alvarez
The Dallas Alliance Against Racist & Political Repression organized a protest in front of Dallas City Hall on May 30, 2020.

12:30 p.m.: During the news conference, Johnson spoke about how COVID-19 has hit Dallas hard, saying the city is hurting economically, physically and emotionally and that now is the time to work together.

He also called on those "looking to take advantage to stay at home."

"We can see the desperation and frustration mounting all around us in this city, but what makes our city special... is that Dallas is a strong city and Dallas is a resilient city. We've been through extraordinarily painful times before."

1 / 41
Chance Horner
Protesters gather in downtown Dallas on May 29, 2020, in response to the deaths of Breonna Taylor and George Floyd while in police custody in Minnesota.

Since Floyd's death on May 25, thousands have taken to the streets to protest and civil unrest has continued to escalate in cities across the country, particularly Minneapolis.

In Dallas, police officers and state troopers set off tear gas Friday night and early Saturday in the downtown core after protesters set fire to a squad car and refused to disperse.

1 / 14
Tiffany Liou
Sneakers are scattered on the floor of a Deep Ellum store that had its windows smashed and shelves emptied by a group of protesters on May 29, 2020.

The George Allen Courts Building and the Earle Cabell Federal Building were among those damaged, according to a Dallas police spokesperson. Several marked squad cars were vandalized as well.

At least one arrest had been made in Dallas as of late Friday. No protesters have been reported injured yet, though one Dallas police officer and one DART officer were both treated for minor injuries from flying debris, officials said.

Johnson also said the city and country are currently experiencing "the most significant struggle I've ever seen in my lifetime."

No one was arrested in Fort Worth from Friday's protests and there were no reports of vandalism to any businesses Saturday morning, a police spokesperson said, describing the protesters there as "very peaceful."

A bystander captured the video of Floyd handcuffed and lying face down on the ground in Minneapolis, as Minneapolis police officer Derek Chauvin pinned his knee to the man’s neck for more than 8 minutes.

The video showed Floyd pleading for help and yelling, “I can’t breathe!” He was later pronounced dead.

Four officers were fired and on Friday, former officer Chauvin was arrested and charged with third-degree murder and manslaughter.

Since Floyd’s death, protests have been held across the United States. On Thursday, Minneapolis had another night of protests that turned violent, during which people breached the police department’s third precinct and set the building on fire.

Taylor’s death has also sparked anger and frustration across the country. The 26-year-old EMT was shot multiple times by Louisville Metro police officers in her apartment after police served a “no-knock” warrant.

“The repeated acts of unjust aggression, excessive force and often lethal violence towards African-Americans in the United States perpetuates the painful and traumatizing redundancy of police brutality,” the Next Generation Action Network, a local civil rights organization, said of Floyd and Taylor’s deaths.

RELATED: 'No justice, no peace': Everything that led to Louisville's Breonna Taylor protest

1 / 17
Joseph Huerta
Protesters gather in Fort Worth on May 29, 2020 in response to George Floyd's death in police custody.