You may not have to wear a mask starting next Wednesday, but you can still be refused service

If you’re asked to leave a business and refuse to leave, you could be cited or arrested. 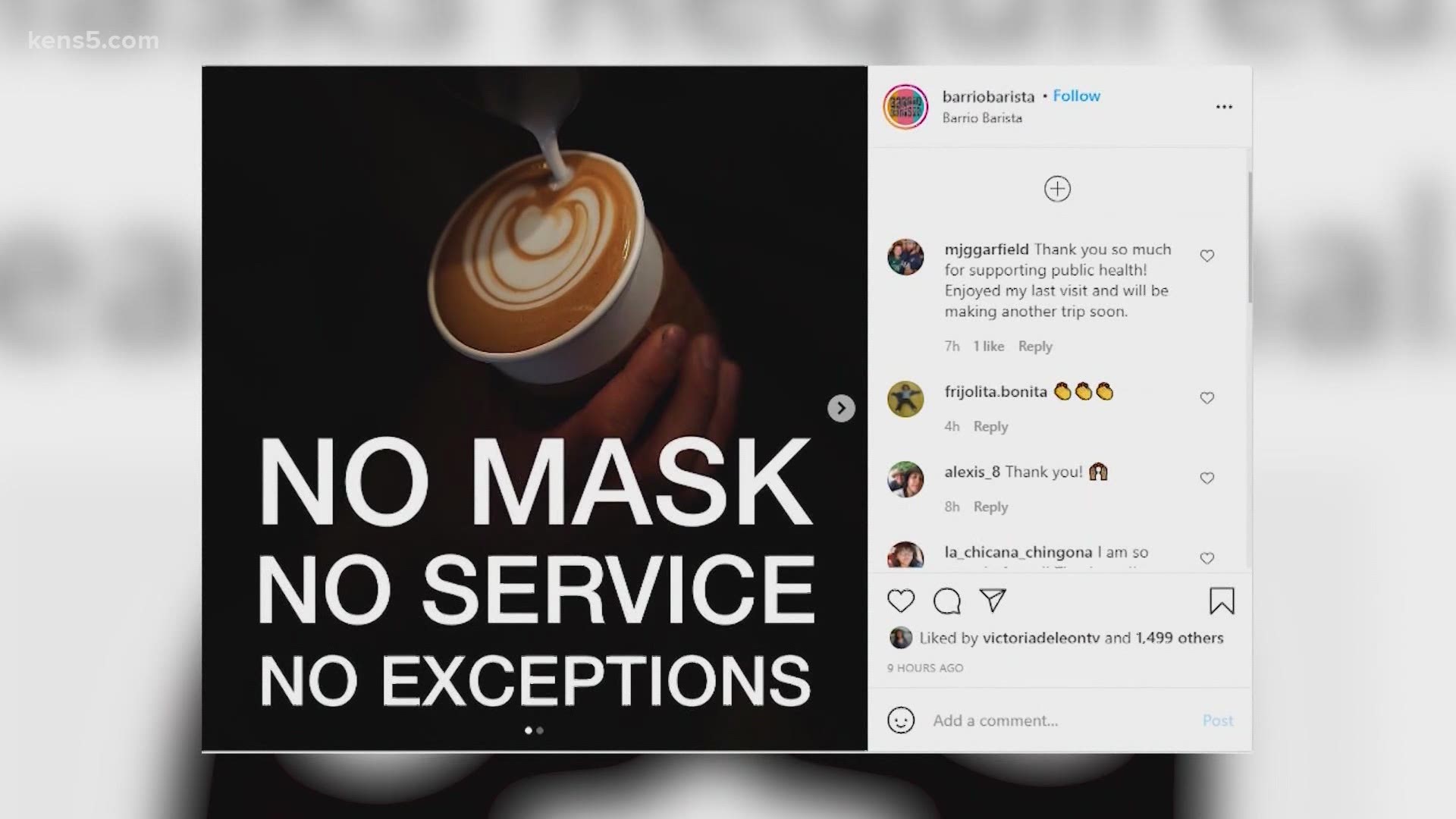 SAN ANTONIO — Texas will soon lift statewide mandates put in place nearly six months ago to control the spread of the coronavirus. The mask mandate and restrictions on business occupancy are among the mandates being scaled back entirely.

While Governor Greg Abbott this week made clear that people may not be charged or penalized for failure to wear a mask or follow COVID-19 guidelines, the executive order alludes to a charge people could face if they are asked to leave a business for failure to follow house rules and refuse.

“Except that a legally authorized official may act to enforce trespassing laws and remove violators at the request of a business establishment or other property owner,” the executive order reads.

“If a property owner or a business establishment asks a patron to wear a mask and that person refuses, you know, the business owner can ask that person to leave,” Bexar County District Attorney Joe Gonzales explained. "And if he refuses to leave, he can pick up the phone and call the police.”

Those who refuse to leave a business or property could face a charge of criminal trespass. Gonzales explained while it may be someone’s right to not wear a mask, the business owner also has a right to refuse service.

"Remember the old saying, ‘No shirt, no shoes, no service?' Well now, they add to that 'no mask,’” Gonzales said. "So if you come and patronize a business and you refuse to wear your mask, don't be surprised if the next person you see is a police officer that's asking you to leave."

San Antonio Police Department public information officer Sgt. Matthew Brown said police will continue to respond to such calls as they have through the years.

“We'll first give the individual a warning, of course, and give them an opportunity to leave,” Brown explained. "If they refuse, the officer will use their discretion in how they want to proceed, that being an arrest or a citation.”

The Bexar County Sheriff’s Office said the same, writing they will “continue to respond to calls for service regarding criminal trespass complaints and enforce state law when applicable. Additionally, each incident will be handled accordingly to include providing resources for the homeless.”

However businesses choose to operate, police said they will act accordingly if they witness any crime — not just criminal trespass.

"I want business owners to know that we have their back,” Brown said.

In 2019, Gonzales announced his office would reject certain criminal trespass cases in which it appeared the individual was homeless. In order for the policy to apply, the alleged offense must have taken place at a non-residential place, the defendant must appear to be homeless, the defendant must not have a violent history nor should they be out on probation or deferred adjudication for any other offense and criminal trespass must be the only charge for which they are arrested.  The policy came after the deaths of Janice Dotson-Stephens and Jack Ule, who both died behind bars on criminal trespass charges.

Asked whether the 2019 policy would have any impact on cases arising from the governor’s rescission of statewide mandates, Gonzales said comparing the two situations would be like comparing “apples and oranges” noting one was specifically intended to prevent the incarceration of homeless individuals simply because they are homeless.

“If the officer believes there's probable cause to believe a person committed the offense of criminal trespass and an arrest is made, we will prosecute that individual,” Gonzales pledged.

Much like County Judge Nelson Wolff and Mayor Ron Nirenberg, Gonzales said Abbott’s decision was a “huge mistake” in light of the state’s current vaccination rate.

"I'm a liberty guy, so I love choice and I like big citizen and maybe a smaller government,” LaHood said. "I love that we have a choice. I think that's appropriate. But I also love that a business owner has a choice to put whatever restrictions on them.”

Though, he chastised Abbott over the announcement because of the predicament in which it puts business owners. He said the policy could potentially put business owners at odds with their patrons and employees, making business owners apprehensive to enforce their policies out of fear it will generate negative attention.

While the charge of criminal trespass is a misdemeanor, LaHood said it’s an offense to take seriously as it is an offense for which someone can be arrested.