Volunteers with Big Mama's Safe House filled plates with the traditional Thanksgiving fixins and welcomed anyone who was hungry. 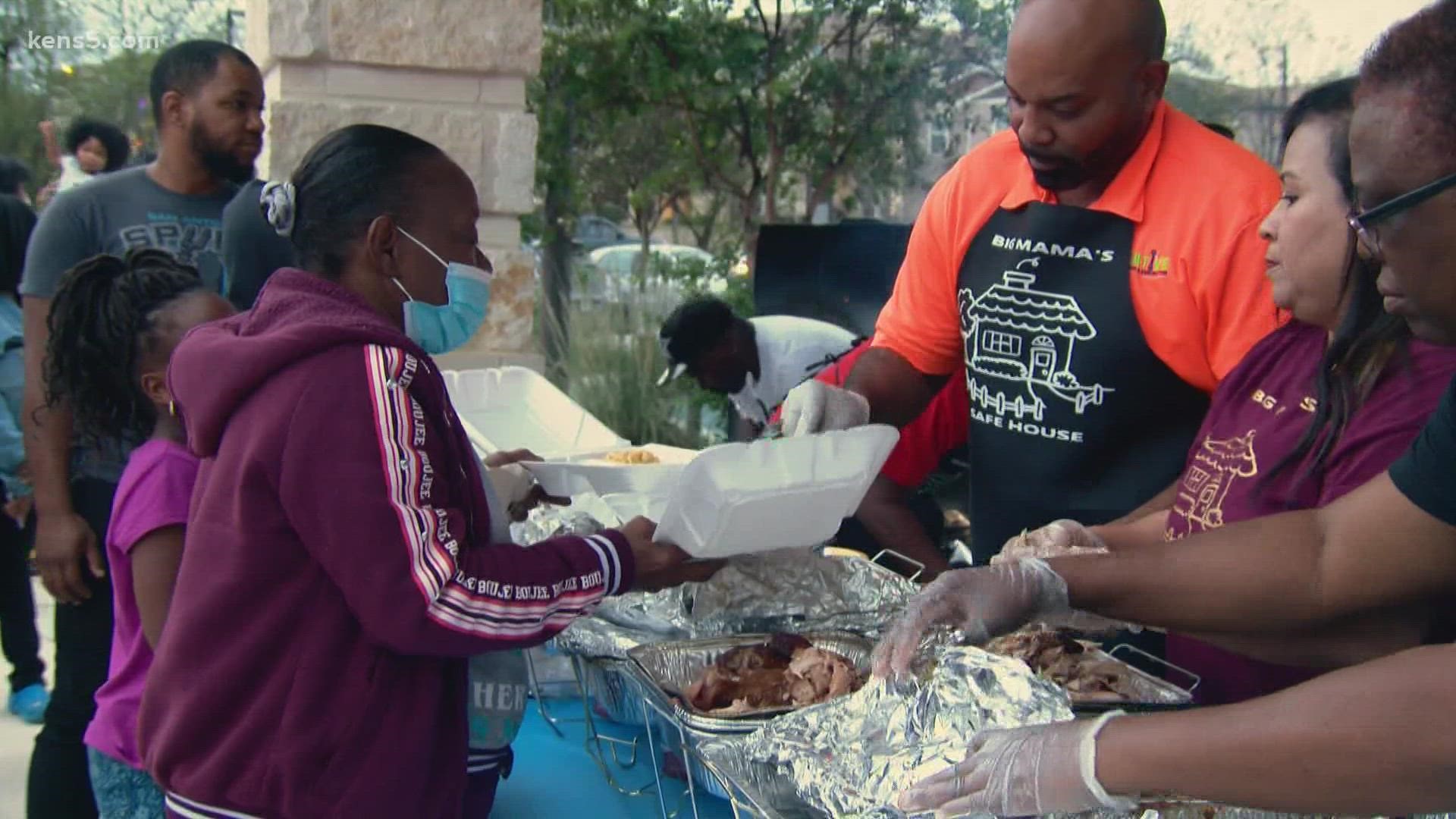 SAN ANTONIO — From the east side of San Antonio, you could smell the Thanksgiving feast for miles Wednesday.

The traditional turkey and fixins were served on a plate hot and ready. Anyone could stop by the Harvard Place/Eastlawn neighborhood and enjoy a free meal.

As KENS 5 learned, the celebration served a greater purpose.

"I think this is a beautiful thing," said attendee, Terrie Dixon. "It is very well needed and appreciated in our community."

Thanks to donations, volunteers with Big Mama's Safe House served all the Thanksgiving favorites to anyone who was hungry.

They had enough food to feed up to 300 people.

"I saw sweet potatoes, I saw cookies, I saw turkey," said 10-year-old Max Cardenas, who attended the event with his family. "It's just amazing food. I really appreciate it."

Stephanie Marin heard about the event on Facebook. Michelle Crossland joined her, getting meals to take home.

"It's kinda cool, really nice," said Crossland, who stopped by after work. "I got a whole plate right here!"

"We were actually in need of food," said Marin. "We weren't too sure what we were going to do about tomorrow yet."

Big Mama's Safe House, created in 2016, works to end gun violence in black and brown communities. It was started by current CEO, Bennie Price, who named the organization the glue that kept his family together: His grandmother, "Big Mama".

"He went to prison for murder and he had a God-given moment at that time. God began to show him that he wasn't going to serve all of the years," said Williams. "God released him early to come out and bring up the same neighborhood that he once tore down."

The organization's work helps with workforce development and utility, rent and internet assistance through their Emergency Housing Assistance program. They provide their safe house to help runaways and victims of domestic violence.

"Maybe there's someone that's in danger. We allow them to stay at the safe house for three days," said Williams. "We are a bridge to get them to the next level."

Through events like the Thanksgiving Drive-Thru, Williams says volunteers with Big Mama's Safe House are building relationships. They're learning what the needs are right now in the community, and how to plan for the future so no one is left behind.

"That's what San Antonio is about, the family, 'la familia'," said Williams.

Big Mama's Safe House runs off donations. If you'd like to help with future initiatives, like their 3rd annual Christmas Toy Drive, check out their Facebook page or e-mail bigmamassafehouse@gmail.com.