While growth is welcomed, many are worried that too much revitalization will force them out of the homes. 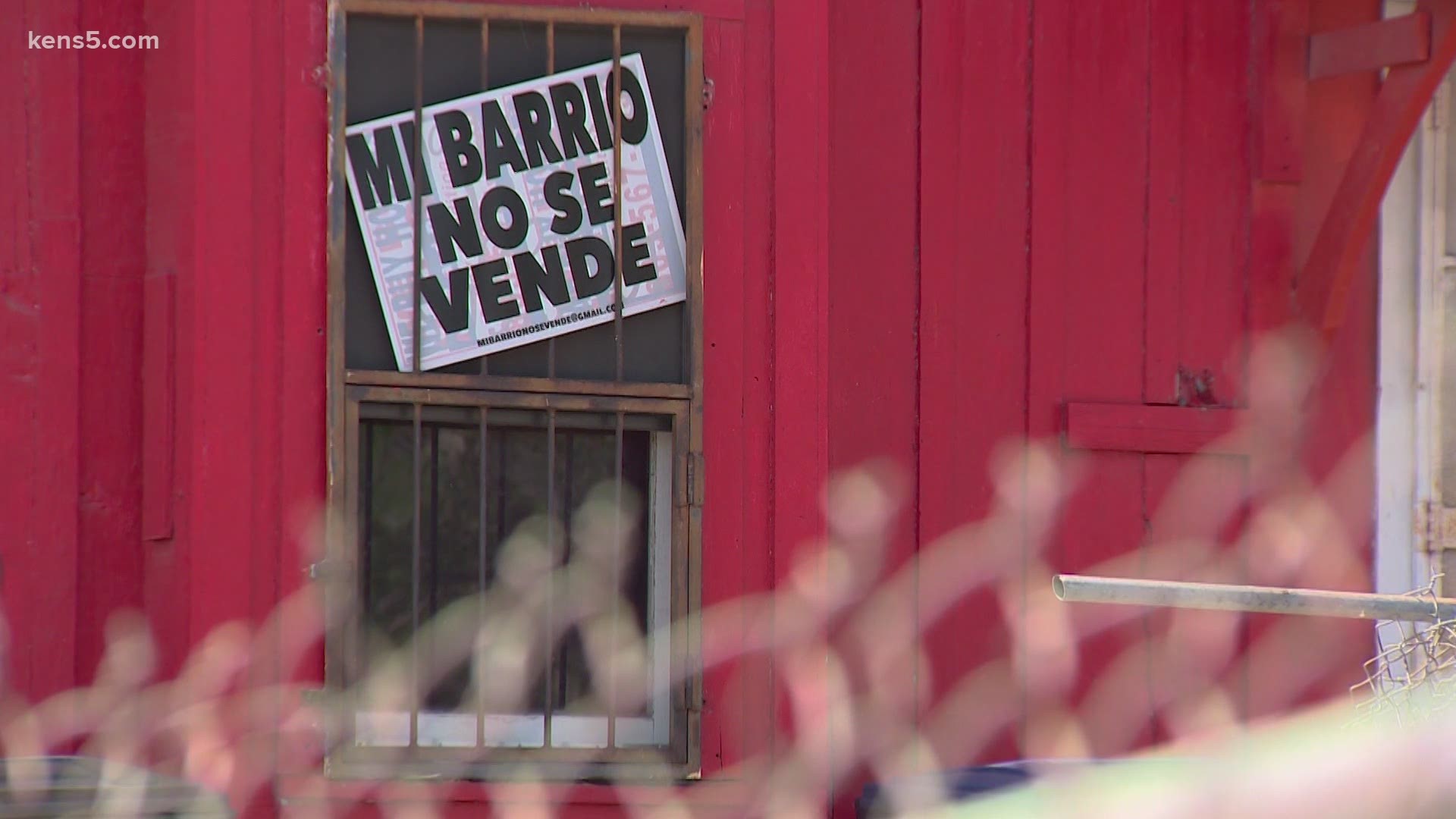 SAN ANTONIO — Development in downtown San Antonio is moving west. UTSA's downtown expansion is an economic generator for the most impoverished area of San Antonio.

While growth is welcomed, many are worried that too much revitalization will force them out of the homes where their families have lived for generations.
But, efforts are underway to help renovate neighborhoods and keep housing affordable.

Local voices are emerging to preserve San Antonio's cultural history and low-income homes with a message of "Mi Barrio No Se Vende," which means my neighborhood is not for sale.

An authentic rhythm connects street stained art, sugary treats that delight the palate, the vibrancy of home, the concert of work and the comfort of family on San Antonio's west side.

These colorful bungalows and shotgun houses have been a launching pad for some of the city's greatest leaders, writers and artists.

It is also home to some of its poorest residents.

Major development is changing the landscape of these low to middle-income neighborhoods.

"I do love the fact that we're growing and everything's rising, but I do also care a lot about the historic to preserve it," said Linda Rosa, owner of Linda's Mexican Restaurant.

Gentrification is the biggest fear of many living here where the average income is less than $14,000 a year. As developers move in, efforts are underway to help low-income families stay in their homes.

For nearly 100 years, generations of the Martinez family have lived in this house on Furnish Avenue. They could not afford to repair it.

"We couldn't even live in this part, the roof had come down and it was just awful," said homeowner Laura Martinez pointing to a room in her home.

But now, it is being renovated through a pilot program that partners the City, UTSA, small contractors and Community Development Financial Institutions.

"Rather than having the west side and south side become like so many other neighborhoods that have been pushed out, and having those people relocate, preserving the historic homes, it gives the downtown San Antonio its own unique identity," said Michael Broyles who is pursing his Masters degree in architecture at UTSA.

Right now, three homes are being rehabbed to show it can be done at an affordable cost using a mix of funding sources.

The goal is to spread it across the city using small contractors. "We're depending on the city just to help subsidize this, but the intent is to go with the private sector outside, like J.P Morgan and some of the other institutions," said Diane Sanchez, CEO Micro: SA.

"These homes are part of San Antonio's culture and history, so when we see housing being knocked down and rebuilt, it changes the entire culture of the neighborhood," said Madeline Mendez of Neighborhood and Housing Services.

"In the future, there may be some form of gentrification. So, this project aims at keeping the community in place while reusing these homes, which from a historic and cultural standpoint, are very, very important," said Dr. Angela Lombardi, associate professor in the UTSA College of Architecture.

"The role we are playing right here is that we produce the documentation, the condition of the house and then we create alternatives for design," said Jose Antonio Herrera Flores, PhD student in Architecture.

"We need to reinvest in our existing housing and this is a great example," said Shannon Miller, Director of Historic Preservation.

Graciela Sanchez is the Director of the Espanza Peace and Justice Center. She has spent 20 years working to preserve the west side's tiny houses and buildings. Esparnza is behind a campaign Mi Barrio No Se Vende, my neighborhood is not for sale to stop gentrification.

"More people are buying tiny houses and we created tiny houses. Where are the most impoverished, the most marginalized people going to find homes when they are forced out of here? They're finding them outside of 1604. And, you know, these people need access to public transportation and necessities," said Sanchez.

Along with the Westside Preservation Association, Esperanza recently secured historic designation for three homes and is now working to have Buena Vista labeled a historic neighborhood.

Esperanza has also been working to save the Alazan Courts - San Antonio's oldest and largest public housing development.

Preservationists scored a victory this year when the San Antonio Housing Authority backed off plans to redevelop the courts as mixed-income and pledged to keep the low-income housing.

Esperanza and its allies want to have the courts rehabilitated rather than demolished and replaced. "We want people to respect the fact that people have been here three and four and five generations and they want to continue to live here. Rather than tearing houses down, let's figure out ways to preserve them. We're also holding the city accountable and asking them to come up with policies that allow people to remain here," said Sanchez.

The city partnership is opening the door for families, like the Martinez', with deep roots on the west side to remain here.

The goal is not just to preserve homes, but people and their culture.

Standing in his home under renovation, Humberto Martinez said, "It's like a dream come true."

The project should be completed by next month and the city partnership will begin work on the next home.