VERIFY: Fake shark photos and other hoaxes to look out for during Florence

Sharks swimming on a highway and flooded airports are a few images that you should second guess if they pop up on your feed. 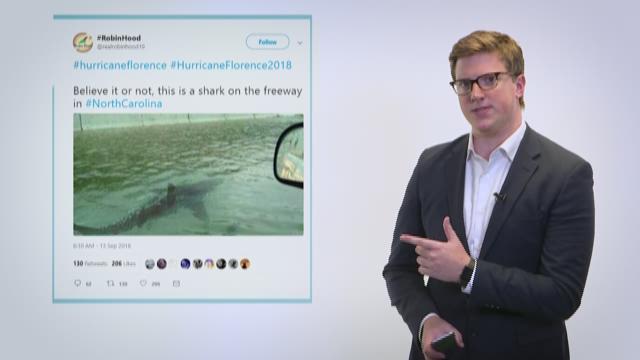 Every time a major hurricane hits the U.S., fake photos and claims start surfacing on social media. Some of them are difficult to sort through, while others are posted almost every time a hurricane makes landfall.

Here's some of the most frequently posted fake images and a way you can check their credibility yourself.

A photo of a shark swimming on a highway has been popping up online since as early as Hurricane Irene.

Believe it or not, this is a shark on the freeway in #NorthCarolina pic.twitter.com/mxNe5JtCvA

The pic is a digitally manipulated image that combines two or more different images into one.

This photo popped up numerous times during Hurricane Harvey. It claims to be from a cargo ship watching the storm move towards Corpus Christi.

But, the image is false. A reverse image search shows thousands of other results some dating back to the early 2000's. Here's an example from 2006.

This pic claims to show a "family" fleeing hurricane Harvey by using a fridge as a boat.

This picture does actually show a scene from Houston, TX but not during Harvey.

As KHOU reported, this photo comes from flooding in Greenspoint in 2016.

This is a picture that popped up during Hurricanes Irma and Harvey.

It seems to show planes under water at airports due to extreme flooding.

As our picture shows, this image is not real. It's a rendering created by artist Nickolay Lamm/StorageFront as an interpretation of what airports could look like due to climate change predictions.

They were published with the data in a 2013 article by Andrew Freedman, titled: "U.S. Airports Face Increasing Threat From Rising Seas."

HOW TO TELL IF IT'S FAKE

Some of these photos are more difficult to verify than others. It's likely many more fake or falsely attributed stories will come out as Florence moves across multiple states.

You can always send your questions to VERIFY to have their authenticity confirmed.

And there are practical steps you can take, as well: