The arrest affidavit details how the younger girl admitted to using the older girl's phone to record the incident and post it to Snapchat. 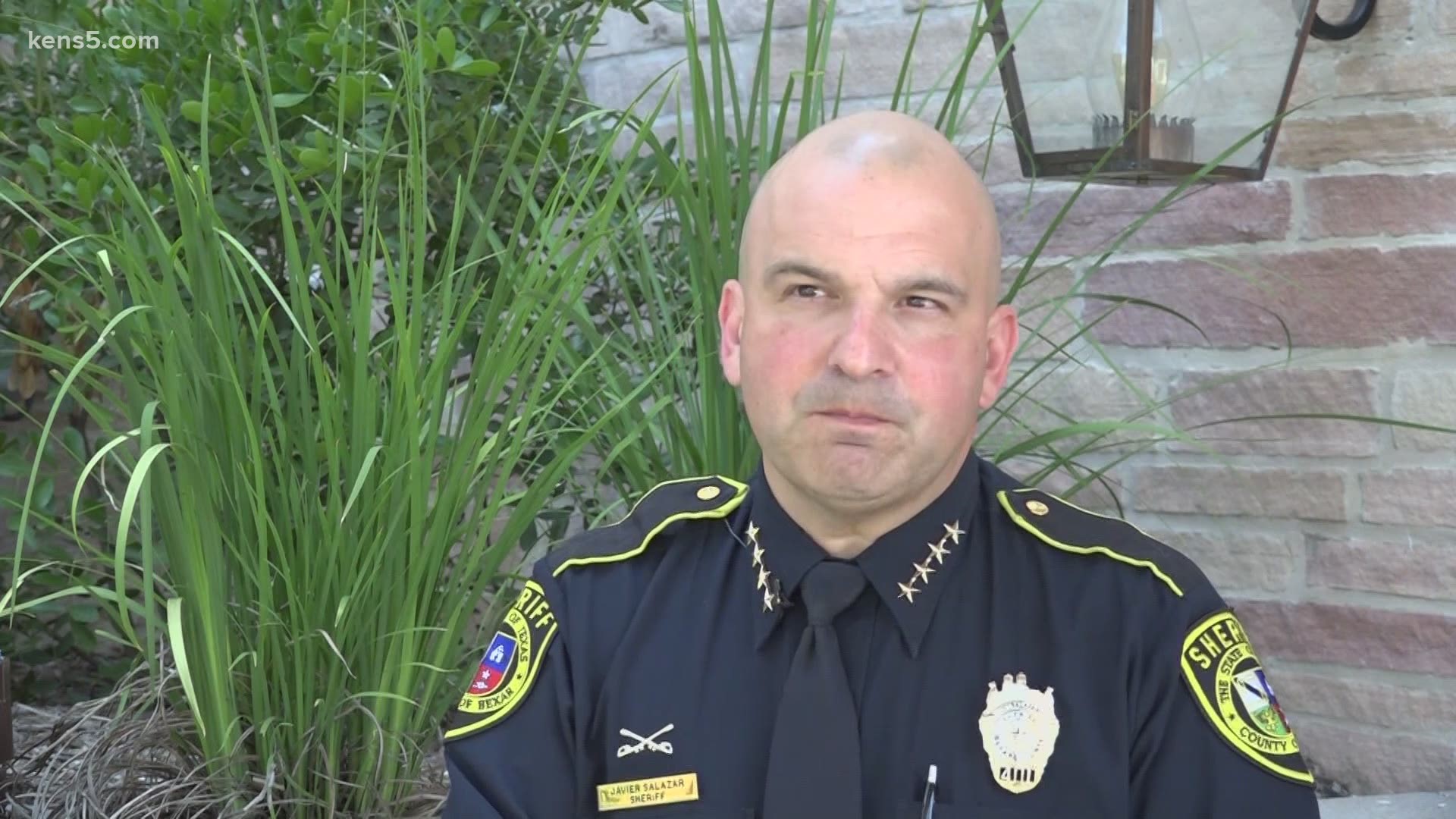 SAN ANTONIO — There was a quiet, but noticeable gasp in the room when Sheriff Javier Salazar told those attending a business breakfast Wednesday morning that he was "shook" by a case Bexar County investigators are pursuing.

Salazar told the crowd "When my homicide sergeant pulled me aside and said 'I'm going to show you video that's going to be very, very disturbing,' and he showed me the video and it was, I'm, I'm shook!  I am still shook.  I'm disturbed by it."

Salazar said on Tuesday, investigators were given video that showed two teen girls stealing a necklace from the body of a man they found in a west Bexar County drainage culvert Monday morning.  The Sheriff said the video clip had been circulating on social media platforms and had even been seen by the family of the deceased.

Salazar said "If it weren't on video? I wouldn't believe that it happened."

The teen girls are 16 and 17.  The 17-year-old is charged as an adult with theft from a human corpse or grave, which is a state jail felony. Jail records indicate she has been released on a $2,000 bond. Salazar said the juvenile was charged as well, but court documents are not available on that case.

Salazar said the teens told investigators they were walking in a new neighborhood south of Marbach Road outside Loop 1604 when they saw something unusual and went to investigate.  The Sheriff says when the girls saw the body in a culvert they called a male friend, who joined them at the scene.

Salazar said what happened next has left many in disbelief.

"One was filming the other taking a necklace off of the young man who was passed, passed away, and it was disturbing because they're laughing. 'I can't believe you're doing this,' or words to that effect, treating it as a joke," Salazar said.

An arrest affidavit says when questioned, the teens told investigators they took the necklace and medallion because the younger girl liked it because it "matched her fashion style."  The older teen told an investigator she removed the jewelry from the man's neck carefully, making sure not to touch him.

Salazar said "It makes you think 'what have we come to as a society?' where not only do these young folks feel like it's okay to do that but then that video ends up on social media."

The arrest affidavit details how the younger girl admitted to using the older girl's phone to record the incident and post it to Snapchat.  Investigators said the video clip also made its way to the Next Door app, where shocked neighbors in the immediate vicinity shared the clip and it eventually ended up in the hands of detectives.

Salazar said after the theft, the three young people did call 911 to report finding the body, but they did not report taking the necklace or medallion.  The girls told investigators they tossed the chain in a nearby grassy area, but kept the pendant.  The younger teen told investigators when she returned to her home, she placed the jewelry on a gold necklace she had. The arrest affidavit indicates the teen did surrender the item when confronted with the video evidence.

The affidavit said the item was returned to the victim’s family and they were able to identify it as his property.

Acknowledging that crime can happen anywhere, Salazar said he is still amazed that this happened in a neighborhood of pricey new homes.

"These young ladies didn't look like some blood thirsty ghouls. They look like my daughter, literally.  They look like your daughter.  They look like the young lady that's babysitting your kids or grandkids," Salazar said, adding that he plans on following this case because he said the situation cries out for solutions.

Salazar said "We can pick our actions.  We can't pick our consequences, and I think it's just the beginning for these young ladies.  I hope that whatever we do moving forward somehow helps them with what they need to turn themselves around."

Salazar said he hopes the incident serves as a 'kick in the pants' to put the teens on the right path.

"It's disturbing no matter how you look at it and I don't know what the fix is. I don't believe it's prison. I believe some mental health help is in order," Salazar said, adding "I don't know what the solution is for children like them, because that's what they are, is children. Legally, yes,  they are in an adult jail now but they're kids and I don't believe that they are beyond helping. I think that they're very much worthy of helping."

The death of the man found by the teens has been ruled a suicide by the Bexar County Medical Examiner.  There is an online fundraiser underway to help the family with funeral expenses.