Authorities responded to a south-side neighborhood Tuesday afternoon, where an apparent violent domestic incident erupted into gunfire and a house devoured by flames. 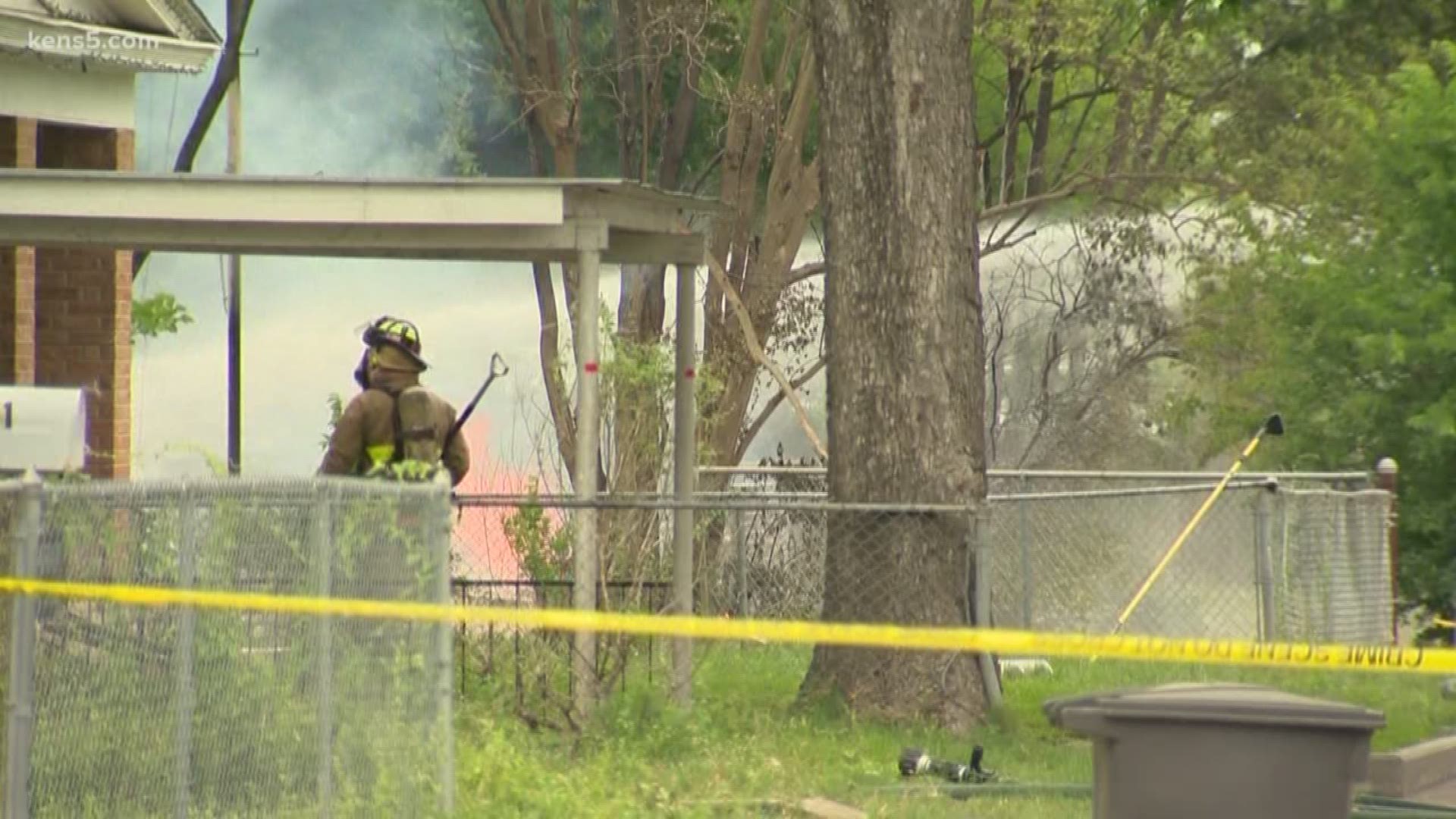 SAN ANTONIO — Two men are dead and a woman is in the hospital after a chaotic sequence of events on the south side Tuesday afternoon involving gunfire and a house eaten up by flames that San Antonio Fire officials say could have threatened the entire block.

According to San Antonio Police chief William McManus, officers responded to the 200 block of Belden Avenue around 4 p.m. after hearing of a shooting-in-progress. McManus said an unidentified man had "severely" beaten up his wife inside their house before she was able to escape.

The woman began to ran across the street, McManus said, while the suspect used a rifle to fire "a number of rounds" in her direction. When police arrived, they began to evacuate as many people as they could while advising other residents in the area to shelter-in-place.

Police say while the woman was not struck by gunfire, she was taken to the hospital to be treated for what McManus referred to as "pretty severe facial wounds."

However, the suspect struck a neighbor living across the street—identified as a man in his late 60s with whom police believe the suspect had a history. McManus said first responders took him to a nearby alley and attempted to treat him, but he was pronounced dead at the scene.

The suspect, a man in his 50s, at some point went prone on his porch with the gun, McManus said, and eventually set fire to the house. A SWAT team eventually arrived, as did firefighters who stayed a few blocks away until given the all-clear that the scene was safe for them to suppress the blaze.

It wasn't immediately clear how the suspect died.

"SWAT felt that he (the suspect) was a threat and they fired a couple of rounds at him," McManus said. "We don’t know at this point if he was dead already or not –if he had taken his own life – because there were multiple rounds being fired and, according to reports, he did not move when he was shot. So he may well have been dead already when the shots were fired. But the SWAT officer believed that he was a continuing threat, and indeed he was, prone on the porch with a long-gun.”

San Antonio Fire was eventually given the all-clear to approach the residence.

A vacant lot sits between the property that has now been devoured by flames and another house; SAFD Chief Charles Hood said that empty lot prevented a fire that was potentially much worse.

"Otherwise it probably would have burned this whole block down," Hood said. "It's the worst day in the world you can think of for a fire, because we had wind gusts of 25 mph."

Another house sat immediately to the other side of the suspect's residence, but the wind wasn't blowing the fire in that direction. Hood added that firefighters were able to save two dogs from the house that was set on fire, and have begun the process of saving belongings that wasn't destroyed.

"A lot of training goes into what we do between Fire and PD, preparing for events like this," Hood said. "So coordination was really good."