The Texas Department of State Health Services said that Walgreens Pharmacy reported experiencing a coding error which they have now corrected. 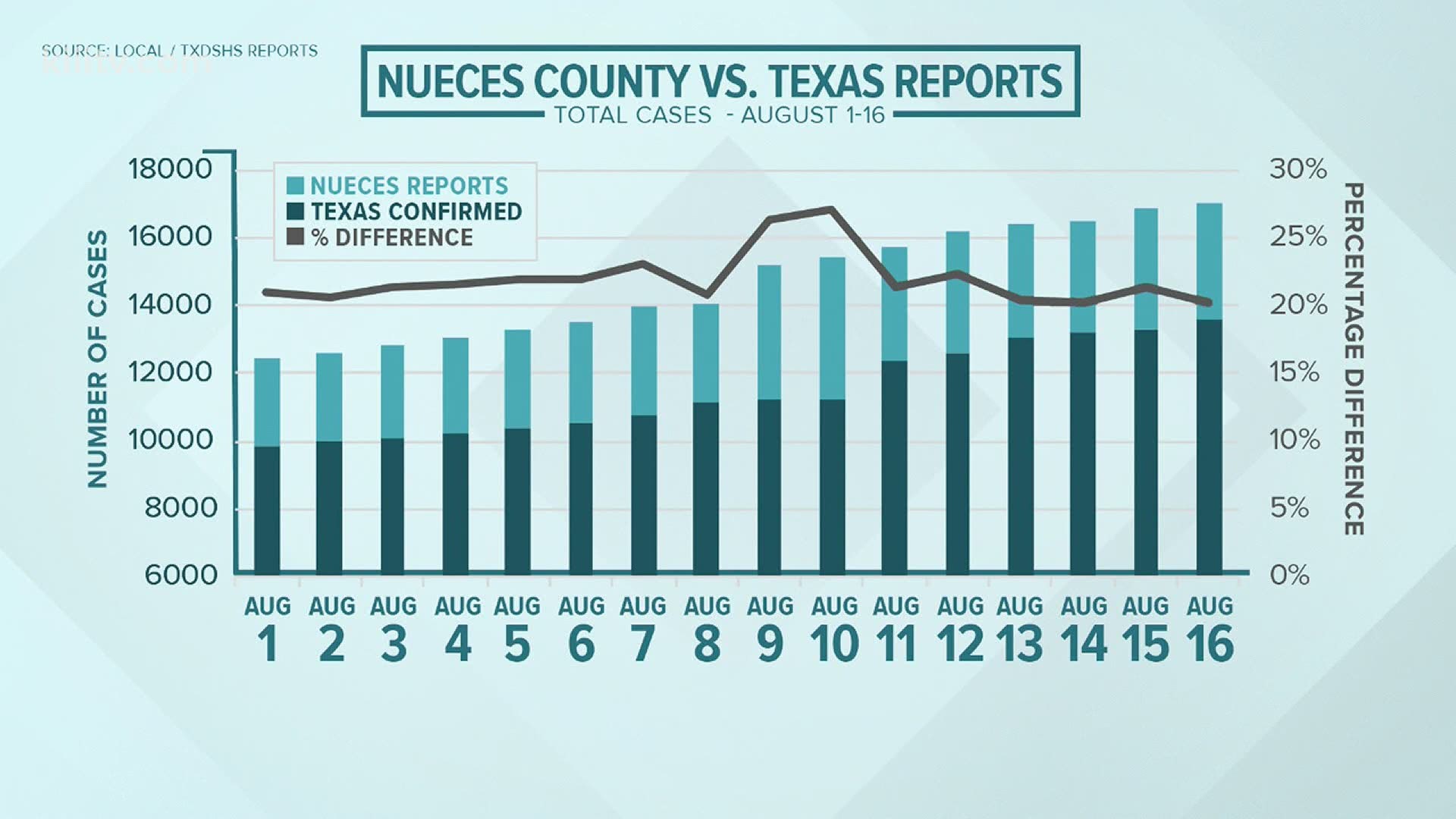 CORPUS CHRISTI, Texas — Counties across the state of Texas are likely going to see their COVID-19 statistics change yet again as a new state data dump is set to take place.

The Texas Department of State Health Services told 3News that Walgreens Pharmacy reported experiencing a coding error which they have now corrected. Because of this some 59,000 COVID-19 test results will be coming down to counties throughout the state.

We've spoken with a media representative from Walgreens and sent over our questions and an interview request. We'll update the story when we hear back.

This is the second data drop in a 7-day span to impact local counties. On Monday, Nueces County revealed a state data drop resulted in thousands of new cases being added to local case counts, with some cases stemming from as far back as June 27.

Take a look at this graph -- it shows the total number of new positive COVID-19 cases reported by Nueces County between Saturday, August 8 and Thursday, August 13.

The highest peak on that graph represents Sunday, August 9. That's when the state sent down some 1,500 positive test results from the county.

The numbers for the remainder of the week appear on par with what we have been seeing for the last month. However, all of the numbers could be skewed, according to City-County Health Director Annette Rodriguez.

The daily numbers for the week of August 10 through August 16 reflected the number of cases collected by our local health department, as well as numbers sent down from the state in what has been called a 'data dump.'

None of those state results, which were included in our daily COVID-19 positive results, were even from this month.

This revelation brings one very important question to mind -- are the numbers right? It's not an easy question to answer.

"We want to put them in the right places so that we can actually all know what the numbers are doing," Rodriguez said. "You asked me a question, which sounds like a fairly easy question, are the numbers right? And you know I can't give you an honest answer because I don't know the answer."

Our COVID-19 daily update numbers for Thursday showed that we had 169 new cases, but Rodriguez said only 57 out of the 169 came from local testing conducted on August 13. The rest of the positive tests were sent down from state contact tracing teams.

"That's upsetting because by law, you have one day to report a COVID case, so that's the law," Rodriguez said. "These back logs, in my opinion, are not supposed to be occurring."

We contacted a spokesperson for the Texas Department of State Health Services. They told us that all of our data dump information for this week is coming from test results from July when back logs from a private testing lab did not correctly send the state about 250,000 positive test results from July. Now, there's a scramble to separate those numbers and send them to the correct counties.

"As soon as we get them we're still reporting them so if I receive 1,500 I'm not gonna hold them and count them and wait, I'm going to report them," Rodriguez said. "We talked about just separating them like these are the DSHS numbers and he said health district the problem is, I still don't know how many of these are from today or yesterday."

We were told that the state data dumps are going to last until this coming Sunday. The plan is to try and show everyone the state numbers collected and then our county numbers the health department counted for the day until this data dump is complete.

"To keep up with this every day is taking some time so what we're saying is we're going to separate them to say everybody knows these numbers came from the state, these are the numbers we have we're trying to figure out where they actually go," Rodriguez said.

Health officials are hoping that plan will present a true picture of what our numbers actually look like. It's not a perfect situation, but the state hopes by August 17 that it will be able to start giving correct daily numbers that actually come from data it collects in Nueces County. The plan is for the numbers to come on the same day, and not weeks later like it is doing right now.