An unnatural sight in the desert: The 40-year story of 'The Desk'

Three students at Sul Ross State University lugged a desk to the top of Hancock Hill in 1981. "The Desk" remains an experience after four decades. 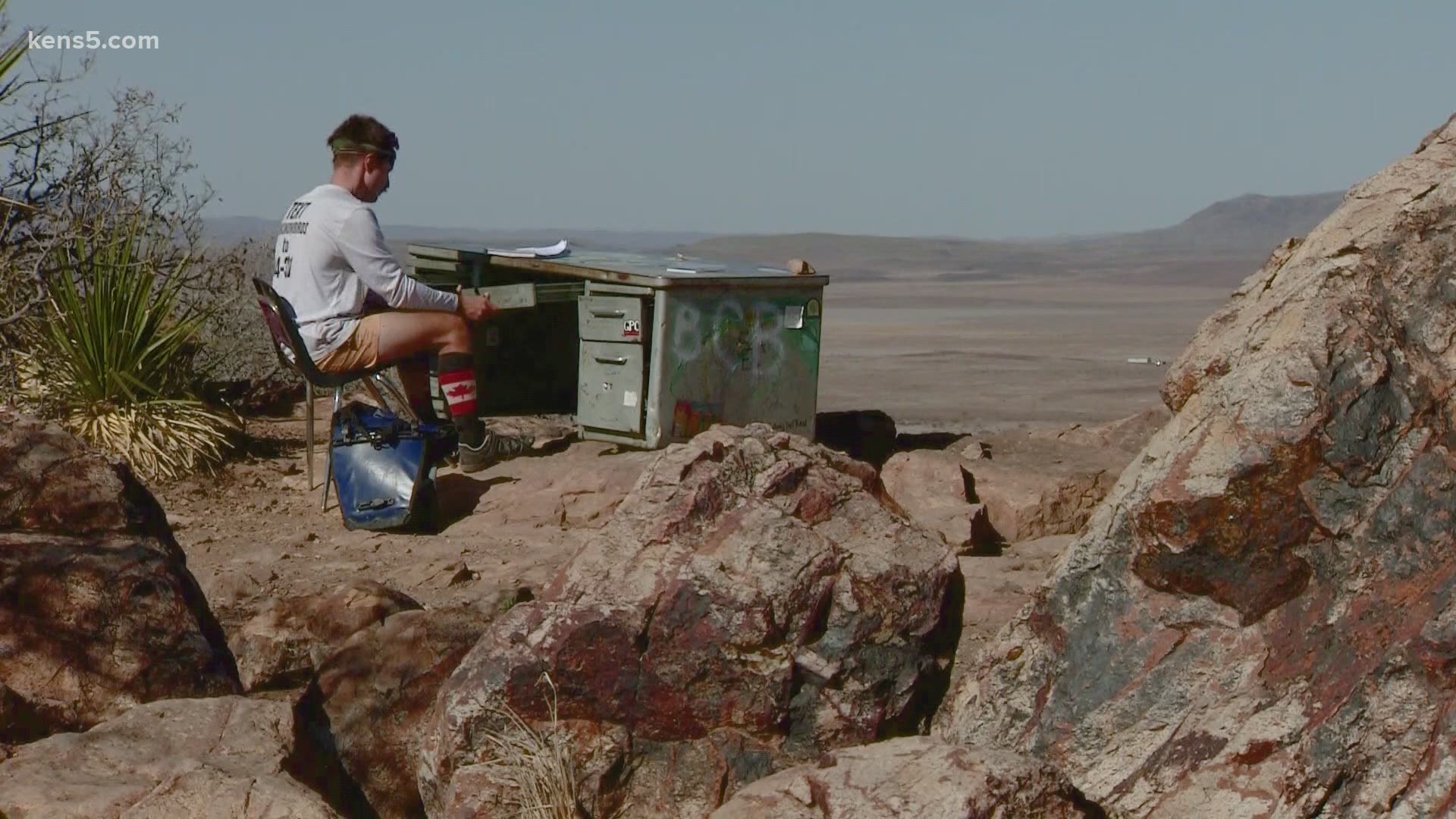 ALPINE, Texas — Kevin Urbanczyk is more trail master than his self-acknowledged title of trail steward. He is also an advisor for the Hancock Hill Club, which helps develop, improve and maintain nearly 10 miles of natural trail on Hancock Hill.

"It's a long history of people appreciating the Chihuahuan Desert and the Alpine area," he said.

The 60-year-old loves a good west Texas backcountry experience. Alpine has one that draws visitors from across the globe.

"I knew Jim Kitchen. I knew the guys who took it up there," he said.

"I was actually a college student here when the desk was carried up there by a few folks," Gallego said.

According to the university, Kitchen, Bill Wagner and Travis Miller wanted a quieter place to study. So, in 1981, the trio lugged a heavy metal desk and chair nearly two miles up Hancock Hill.

"Those guys were always outside doing stuff," Urbanczyk said. "For them to think up the desk...I think it's a great idea."

The desk, positioned on a trail, became a study hall like no other.

"It's just wide-open desert," Urbanczyk said. "To some, that would be an out-of-body experience or something. To me, It's just what I want to see."

The study location caught on.  Over the years, the desk has itself become part of the fabric of Alpine.

"It's really iconic. It's a part of Sul Ross," Gallego said.

The university is a core part of the Alpine economy on the cusp of celebrating 101 years of existence. While students come for the education, they can also flock to the trailhead near campus to elevate their minds.

"To have a tranquil, peaceful place to study where you could actually just look out on the world and solve the problems of the world," Gallego said.

Christina Donald had to see the desk for herself. The graphic designer thought it was creative, artistic and a little rebellious.

"It's stopping to take a moment and spend some time with yourself," Donald said. "Especially after a year like the one we've all had."

Alpine Christian School Executive Director Bobby Duncan said in his quest to find the fountain of youth, he came upon the desk instead.

"I've heard about the desk for so many years, and here we are," Duncan said. "Just all God in all of his glory."

According to the university, Kitchen left a notebook in a drawer where other visitors started to journal their feelings and experiences.

"I occasionally write in the journal, or my kids do," Urbancyzk said.

The journal is as much a part of the desk's draw as the desk itself—pages filled up with the DNA of the heart and mind.

"People who write with raw emotions about something going on in their lives," Gallego said. "People who have contemplated suicide."

The pens and notebooks have an unspoken system of replacement. Old journals go to the Bryan Wildenthal Memorial Library at Sul Ross State.

"We don't moderate. We don't regulate. We just put them in the boxes as they come in," Meletta Bell said.

Bell is the senior archivist. She's been in the archives since 1986.

"Some of it's pleasant reading and some of it's not," she said. "But that's the spectrum of humanity."

The journals come to the library's front door or are hand-delivered. They come in an array of colors with various inks, writing styles and emotions.

The archivist said a number of the entries are about "I was here." There are drawings and doodles and words too profane to repeat.

"There's more about love than there is about negative things," she said.

One entry came from an 11-year-old boy who wrote an entire page. His last lines brought a smile to Bell's face.

"His last comment is that Zombies are the only intelligent life left on Earth," she said.

People also write on the desk. Time and weather took their toll on the original desk. The concept, though, gave birth to generations of replacement desks.

Urbancyzk said the experience is supposed to be one of no trace primarily. Sadly, that's not always the case with some who try to destroy the battered and worn Texas landmarks.

"Tossing it over the edge, which is not very far," he said. "But it gets bent up. Shopping carts, tearing drawers up."

The trail steward said the desk is there to stay. He's even had the honor of carrying up a few replacements in his truck.

There are plans to put up signage to help visitors reach the desk with ease.

Four decades after a crazy college idea put a piece of classroom furniture on Hancock Hill, the view remains introspective and everlasting.

"I don't think in their wildest imagination they would have ever thought that it would have developed into what it has become today," Gallego said.