The photos are among the first to be released showing conditions inside a facility under the Biden administration. 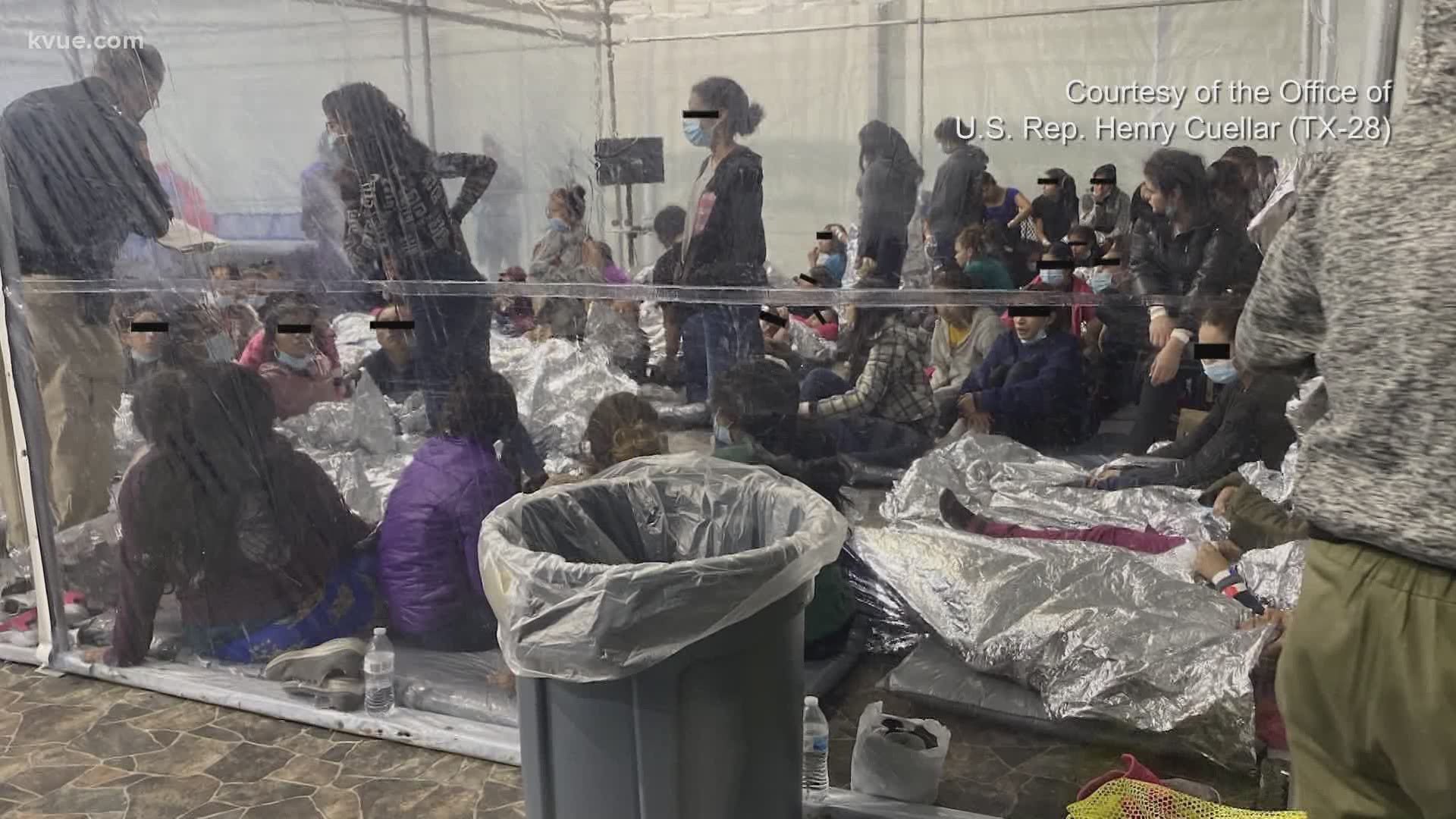 DONNA, Texas — Photos provided by the office of U.S. Congressman Henry Cuellar, Texas-28, on Monday are giving Americans a look inside a border facility under the Biden administration.

According to Cuellar, the photos were taken at a temporary U.S. Customs and Border Protection overflow facility in Donna, Texas.

The photos show crowds of masked children inside small rooms walled in what appears to be plastic. Some are sitting on cots on the ground, others wrapped in silver blankets.

On the same day, Sen. Ted Cruz. sent a letter to President Joe Biden calling on him to provide the press access to the border facilities to "inform the American people about what is happening at our southern border."

"Denying the press the ability to observe, film, and report on the conditions at the border is not openness or transparency — it is hiding the truth from the American people," he wrote.

Cruz and Sen. John Cornyn plan to lead a tour of the border in the Rio Grande Valley with 13 other senators on Friday. Cruz said he wanted the press to be able to accompany their party as they did so.

"It is not enough for members of the Senate to see what is happening—the American people must see," the letter read. "That is why I requested that members of the media be allowed to join us. But your administration clearly and emphatically refused to offer press access. This is outrageous and hypocritical.”

A week ago Monday, WFAA learned the federal government would use downtown Dallas' convention center to hold up to 3,000 immigrant teenagers as sharply higher numbers of border crossings have severely strained the country's current capacity to hold unaccompanied minors.

RELATED: Answering FAQs about the unaccompanied migrant teens being housed in Texas

Federal agencies will use the facility to house migrant teens temporarily. The memo describes the soon-to-open site as a  “decompression center.”

Migrant children have continued to arrive at the Kay Bailey Hutchison Convention Center in Dallas over the course of the past week. Federal officials estimated there were around 1,500 children in the facility as of Sunday and about 10,500 children in Office of Refugee Resettlement (ORR) shelters across the country.

The Federal Emergency Management Agency (FEMA) is supporting the Department of Health and Human Services in responding to the surge of unaccompanied children at the border. FEMA said they are working with HHS to expand capacity "for safe and appropriate shelter" and provide necessities like food, water, and basic medical care.

FEMA will help receive, shelter and transfer the children if they arrive alone at the border over the next three months, Homeland Security Secretary Alejandro Mayorkas said, according to a report from The Associated Press.

The influx in children arriving at the border alone has strained the abilities of the Department of Homeland Security and Department of Health and Human Services to quickly process and move the children through the system, the report said. At the same time, federal shelters used to lodge those children are overwhelmed, leading to the need for a space like the convention center.

Cuellar told Inside Texas Politics last week that officials in Biden's administration are not consulting Texas Democrats who represent the border as the White House works to address the overall surge in migrants journeying north across the Texas-Mexico border.

After four years of a hardline stance by Trump, the Biden administration has made it known that it will take a more human and efficient approach to border enforcement. Border observers say they think that is leading to the current surge, which Cuellar thinks will likely increase over the next several months.

Biden administration officials claim they have inherited an untenable situation that came from what they say was the Trump administration's undermining and weakening of the immigration system.

Critics, however, feel that the administration is inadequately prepared to handle the surge and question why officials won't allow the press inside these facilities to examine conditions.

“I haven’t seen a plan,” Rep. Michael McCaul, R-Texas, told the Associated Press. “They have created a humanitarian crisis down here at this border that you have seen now. And the reason why they are coming is because he says words do matter, and they do. The messaging is that if you want to come, you can stay.”

Mexico has also now limited non-essential travel on its southern border as the country is again under pressure to slow the flow of migrants north into the U.S.