Demonstrators say they were nearly run down Saturday by a driver toting a Trump 2020 flag on his truck. Nobody was hurt. 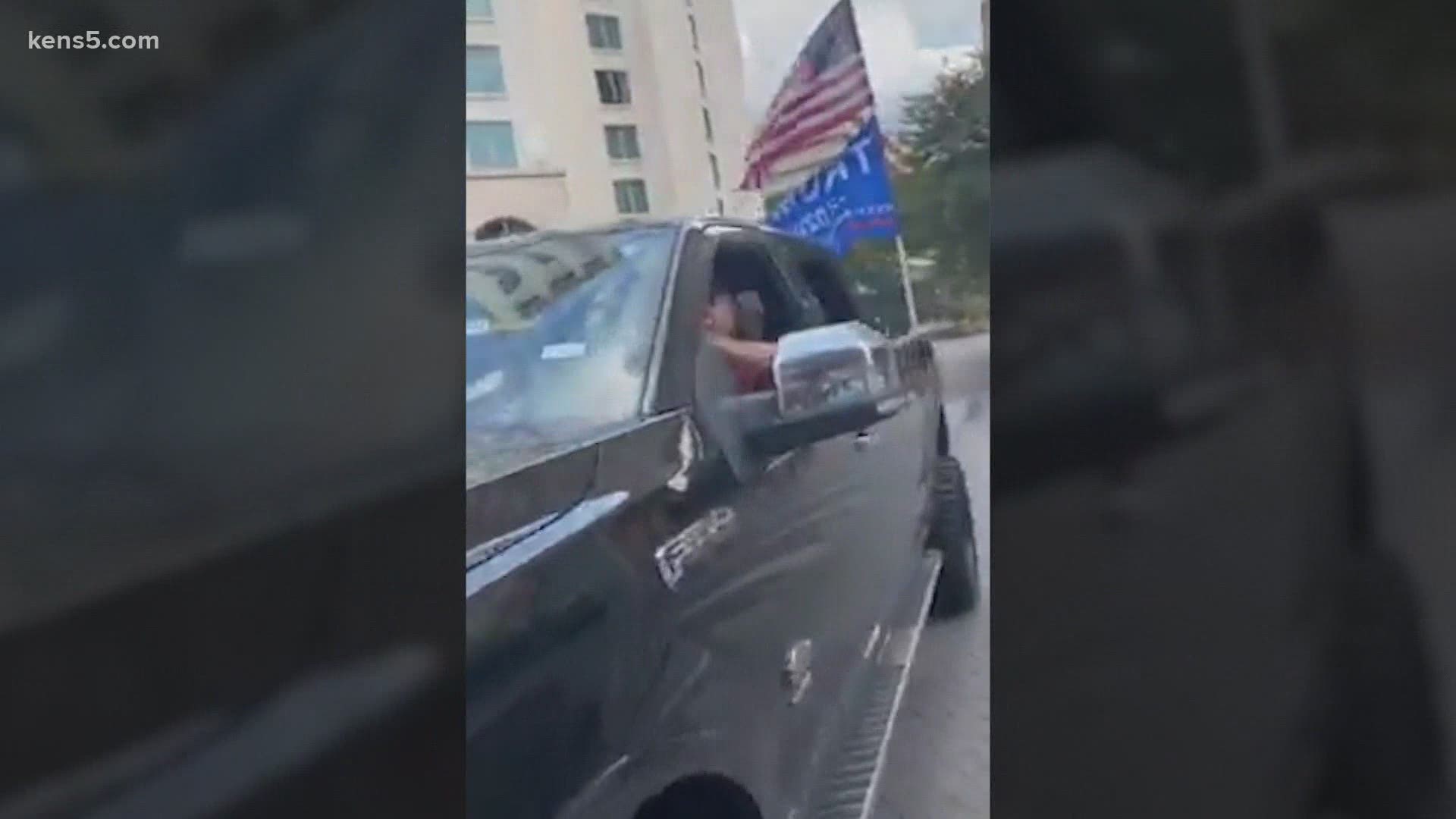 SAN ANTONIO — New video from a Saturday protest showing a driver going through a pack of protesters marching in a downtown road was widely circulated on social media over the weekend.

City Councilman Roberto Trevino remarked that the video depicted actions of "violence and animosity against Black" and other people of color in the community.

"That was not what we thought was about to happen," said activist Camille Wright, who was among the demonstrators marching as part of a campaign to divest from law enforcement. "Intimidation, sure. Drive out of the crowd, maybe swerve around. Definitely didn't think that he was going to plow through."

Wright said demonstrators were in the street, briefly crossing a street near the driver of a truck, who identified himself to KENS 5 on Monday as Eliazar Cisneros.

"We tend to like to occupy the street," Wright explained. "Part of protesting, we're trying to distract your everyday downtown type of deal. We're not destroying anything or doing anything too crazy. If you're having lunch downtown, you're gonna be shaken up for the seconds that we are passing by. And that's all we meant to do, is to pass by."

Video of the demonstration shows the moment Cisneros came driving down the street. In a video sent in by a KENS 5 Eyewitness, screams can be heard as Cisneros drives slowly into the crowd. Cisneros is heard telling the protesters to get out of the street, using an expletive at one point. The demonstrators responded in kind, telling Cisneros to move his truck out of the street.

Reached via phone Monday, Cisneros told KENS 5 he did not intend to injure anyone.

"I didn't want to hurt anybody," Cisneros said. "You know, get off the street, get on the sidewalk and protest whatever you are protesting on the sidewalk. Stay safe."

Though, demonstrators overwhelmingly took to Twitter describing how they felt Cisneros had attempted to hit protesters with his vehicle.

Tonight, after being in (another) protest where a truck intentionally tried to drive through/hit protesters, I’m thinking a lot about the normalization of state + right wing violent tactics, both in the media and in ourselves as protesters/leftists/etc

People think that what has happened in other cities cannot happen here in San Antonio. There have been two times where people have almost been hurt in the same ways as other cities. We almost got run down today. A few days ago some people showed up w/ guns to a vigil.

Wright said no matter Cisneros' mindset, the crowd was in fear. Wright noted that Cisneros and other members of This is Texas Freedom Force have shown up to their demonstrations armed with weapons. Cisneros said as much, telling KENS 5 he has been to other demonstrations as an opposing viewpoint, even bringing a long gun with him to the demonstrations.

But Cisneros said he wasn't looking for the demonstrators on Saturday. Instead, he said he was driving aimlessly, "waving my flags and showing support for my president." While online court records show Cisneros was charged late last year for driving while intoxicated with a breath alcohol content of 0.15 or greater, he said the pending charges have not subjected his driver's license to any conditions that would prevent him from driving aimlessly downtown. Additionally, he said he does not have a license to carry a firearm, noting that the law does not require a license to openly carry a long gun.

Wright said it's not the first bad encounter she and others have had while peacefully demonstrating.

"A lot of my fear -- I will speak for myself, I won't speak for everybody out there -- doesn't come from just people in uniform," Wright said. "Not SAPD, not Bexar County, but those who support them and are out here fighting that fight and are so pro-police that are willing to harm someone."

Trevino said the incident highlights the need to educate and bring awareness to the Black Lives Matter movement.

1/4 Yesterday, a group of peaceful protesters was nearly injured when a driver forcefully drove into the crowd Downtown. Fortunately, nobody was hurt; but actions like this of violence and animosity against Black and POC community members are examples of the safety concerns

San Antonio police said they have not received any reports about the incident but are encouraging those who were there to file a report. The agency also said the incident is under review by the Traffic Investigation Division.

"We don't have any hopes at all," Wright said "I mean, we're out here fighting for police accountability. We don't expect (police) to hold him accountable either. So we don't expect anything."

Though, Wright said ultimately, pursuing criminal action against Cisneros would take away energy from the goal of calling on council members to reallocate some of the $487 million proposed to go to the San Antonio Police Department. Wright said at the root of it, the group of demonstrators participating in the #10DaysToDefund movement believe the department is over-funded and is calling for some of the funds to be diverted to other under-served areas of the community. She encouraged those who are confused about their message or goals to start a civil dialogue.

The budget is slated to be voted on Thursday.

While Wright said she's not counting on funds to be diverted, she and others will continue to work toward that objective.

"We are building a better community for forever," Wright said. "Not for the next fiscal year." 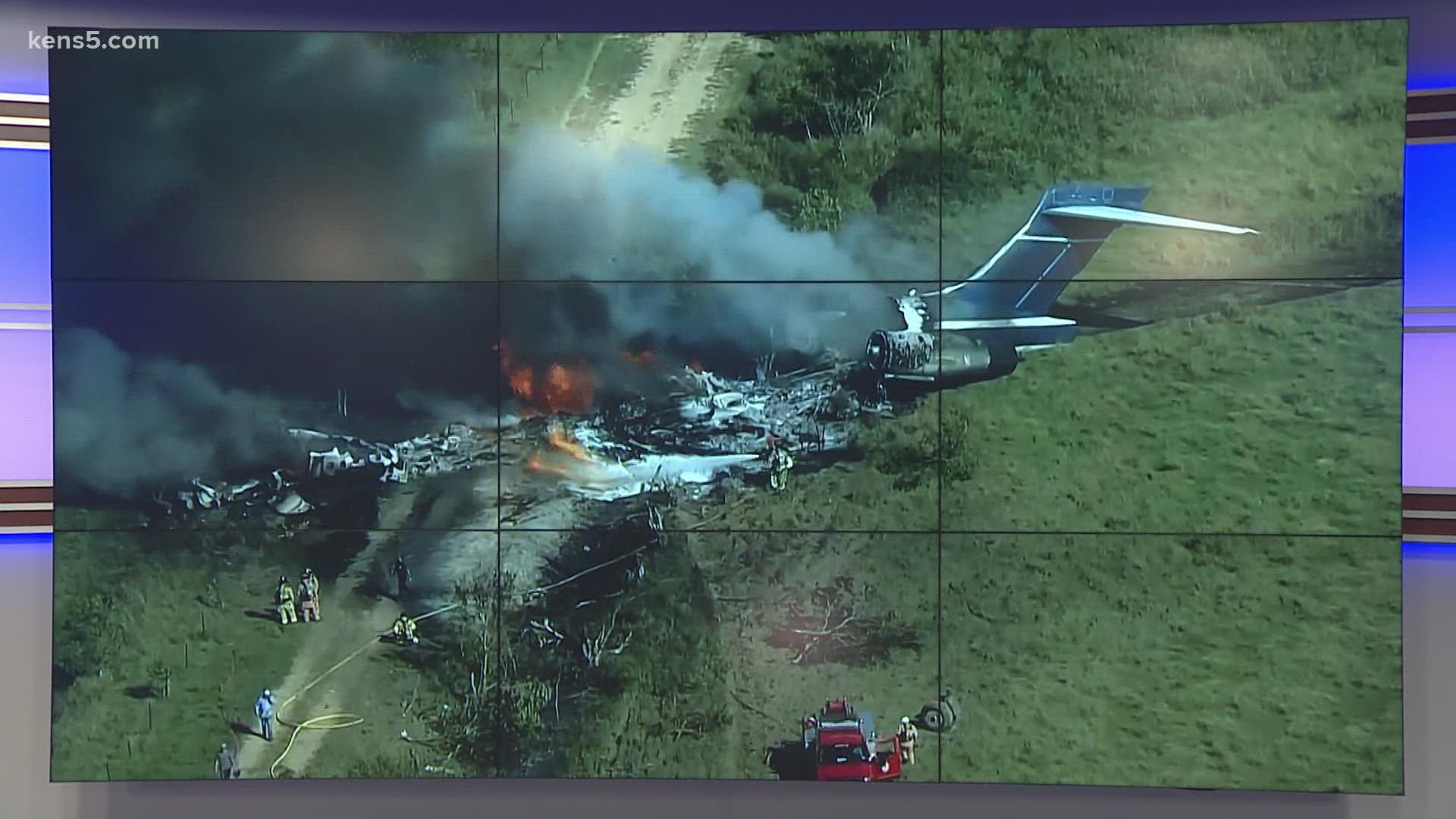 Authorities investigating after plane crashes near Houston; no fatalities reported