"The ERCOT Board met this evening and directed the Corporate Secretary to exercise the 60 days’ termination notice to ERCOT President and CEO Bill Magness." 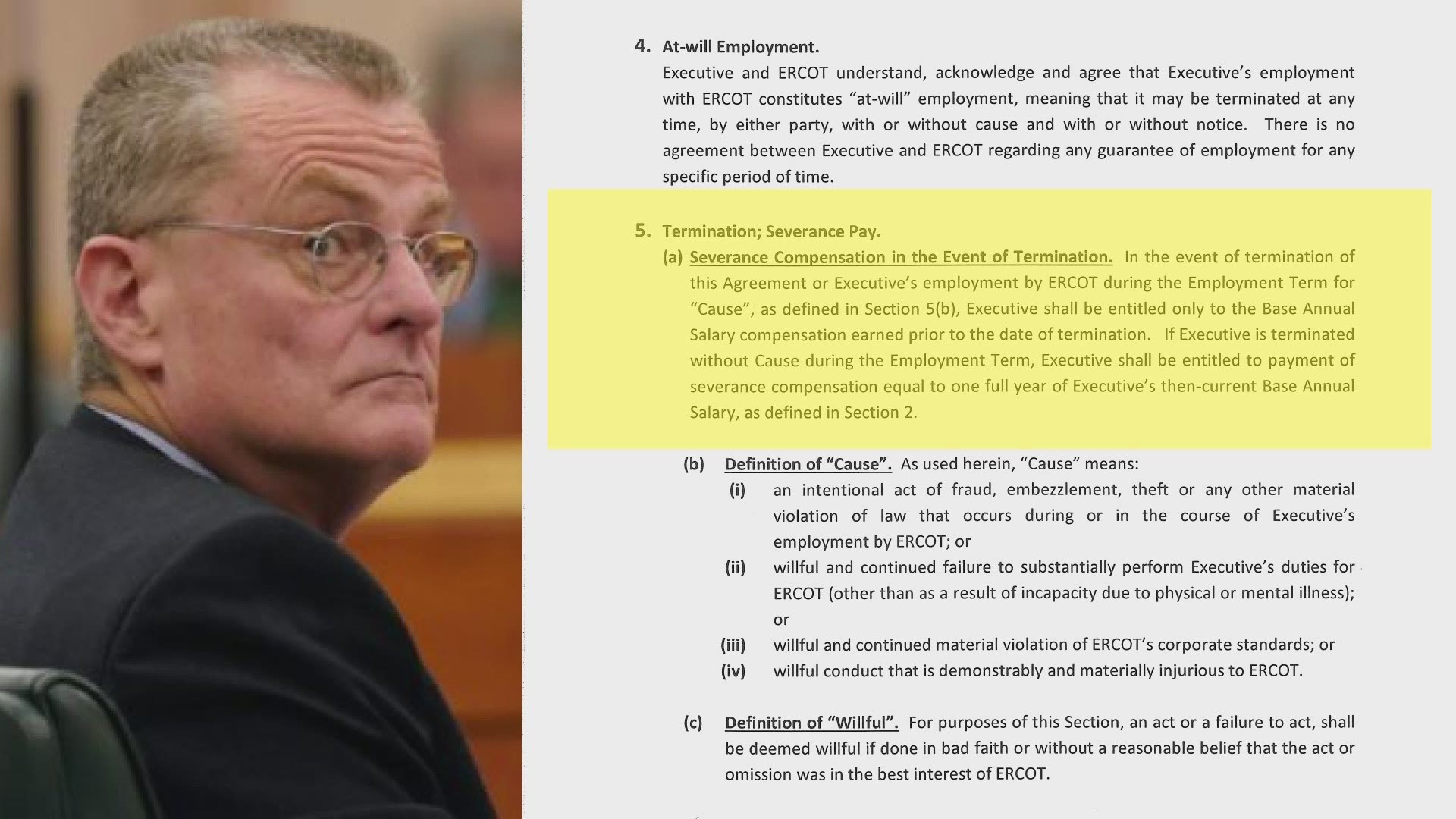 Bill Magness has 60 days left as CEO of The Electric Reliability Council of Texas after the ERCOT board of directors met in a closed session Wednesday night and gave him a 60 days' termination notice, according to an emailed statement from ERCOT.

Thursday, ERCOT confirmed Magness told the board of directors that he will not seek or accept severance pay.

According to Magness' 2016 employee agreement obtained by WFAA, his base salary when he started the job was $597,000, with the eligibility for a 10% retention incentive payment if he stayed on for a full year. The employee agreement also stipulates a 5% raise to Magness' current salary every year for two years, and eligibility for a 15% and 20% retention incentive payment in year two and year three of employment, respectively.

Magness' employment was at-will, meaning ERCOT did not have to give a reason for terminating his employment.

­­­­­“The ERCOT Board of Directors met this evening and directed the Corporate Secretary to exercise the 60 days’ termination notice to ERCOT President and CEO Bill Magness pursuant to the employment agreement with ERCOT," the statement says. "During this transition period, Bill will continue to serve as President and CEO and work with state leaders and regulators on potential reforms to ERCOT. The ERCOT Board is expected to begin an immediate search for a new President and CEO, and will continue to discuss the transition plan at future meetings during this time period.”

After the news of Magness' firing, Patrick tweeted:

"2 days ago, I called on ERCOT and PUC leaders to resign. Good news - now they are both gone.  Next — one of my top 31 priorities — reforming ERCOT and fixing what went wrong."

Texas Attorney General Ken Paxton said in a tweet Magness' firing "signals accountability for the disaster that swept through our state two weeks ago" and called ERCOT's move "a solid step toward justice for Texans."

On Monday, Public Utility Commission (PUC) Chairman DeAnn Walker resigned from her position Monday, saying doing so was "in the best interest of this great State of Texas." On Wednesday, Gov. Abbott named her replacement – Arthur D'Andrea of Austin.

RELATED: Texas Lieutenant Governor Dan Patrick talks reopening and winter storm, says ERCOT's CEO will be out 'one way or another'

Monday, Patrick said that after almost 24 hours of testimony in the Senate Business and Commerce Committee's investigation of the power outages, including nine hours from Walker and Magness, he believes it is clear neither adequately addressed the challenges of the winter storms.

Last month, ERCOT announced that four of its board members resigned Wednesday, Feb. 24 following its board meeting, and a fifth board member separately submitted her resignation. All of those members lived out of state, records show.

KVUE staff contributed to this report.