Monday saw an all-time record for power usage in Texas in the month of June, ERCOT officials say

A request for Texans to conserve energy is expected to last through Friday, June 18. 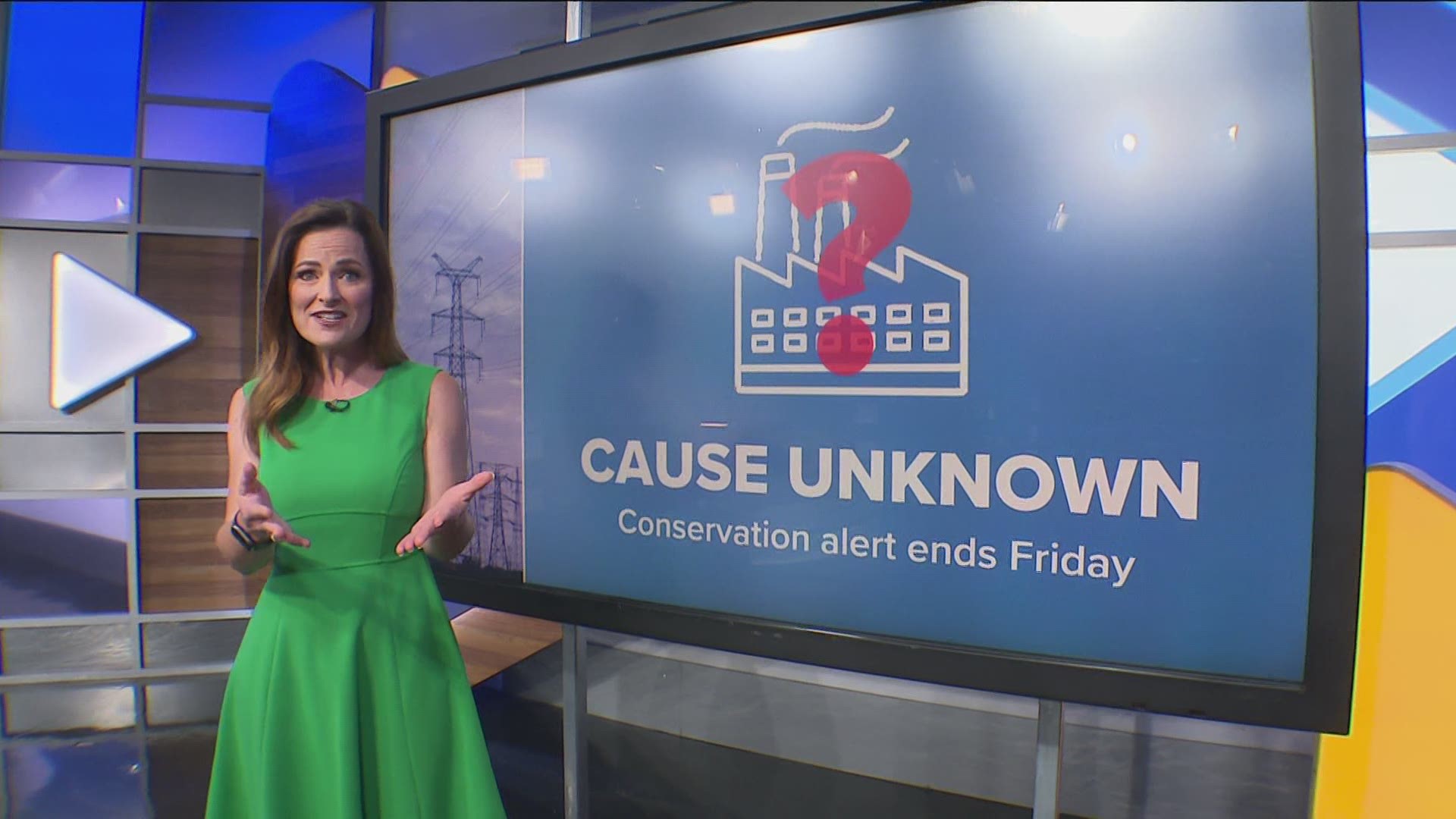 TEXAS, USA — This story will be updated with new developments Monday.

Texans are being asked to reduce their electric use as much as possible for the rest of the week as more plants were offline than typically expected, according to ERCOT. But no rolling outages were anticipated as Texans continued to conserve energy Monday afternoon, ERCOT officials said.

The conservation request is expected to last through Friday, June 18. At one point Monday, electric demand was predicted to outpace supply as temperatures soar into the triple digits throughout the state, data from the Electric Reliability Council of Texas showed.

At an afternoon news conference, ERCOT officials said it's unlikely that rolling outages would be needed at this time. They said the issue is not due to transmitting power across the state, but rather an unexpected amount of equipment that was offline, triggered by generation owners themselves and their resources.

There were 12,178 megawatts of electrical generation offline Monday, including 9,066 thermal (gas or coal) and 3,112 megawatts of renewable energy (wind or solar), said Warren Lasher, Senior Director of System Planning at ERCOT. Typically on a hot summer day, one megawatt can power 200 homes.

Variability of output from wind and solar are well known, but "what is dramatically inconsistent is the forced outages in the thermal fleet," Lasher said during the news conference. He said these outages Monday are three to four times the outages typically seen at this time of year.

"It is not consistent with fleet performance that we have seen over the past few summers," Lasher said.

He said ERCOT is working to find out why so much generation is out of service. Of the outages, less than 500 megawatts offline Monday were planned, scheduled maintenance, Lasher said.

So what will the rest of the summer be like regarding the electric grid?

“I think I would say that I find the current number of units on outages to be very concerning... We operate the grid with resources we have available," Lasher said. "My concern is the resource owners need to make sure their plants are available over the summer months."

Generally, during the summer months, there is potential for scarcity during three timeframes of the day: 2 p.m. to 4 p.m.; 5 p.m. to 6 p.m., and then in the evening when the sun goes down, Lasher said.

The urge to conserve lasts through Friday, but ERCOT says there will be more information on Tuesday on when these plants could come back online.

How to conserve energy

Under the conservation alert, ERCOT is asking residential consumers to:

Businesses are also being asked to minimize their lighting and use of electric equipment, and large consumers should shut down or reduce non-essential production, according to ERCOT.

ERCOT added that every degree of cooling Texans use increases their energy use by 6 to 8%.

Those with critical medical needs should get in touch with their local electricity provider to create a plan in case-controlled outages are put in place.

Sopko said settlement of the numbers could take a few months, "but it's safe to say a new record was set" Monday, making it an all-time record for power usage in Texas in the month of June.

When demand is higher than electric supply, ERCOT will begin its emergency operations to protect the grid from an uncontrolled outage. The council's emergency operations has three different levels and begins when reserves drop below 2,300 megawatts and aren't expected to recover within 30 minutes. Level 2 begins when those reserves go below 1,750 MW, and Level 3 starts when that number hits 1,375.

If reserves drop below 1,000 MW and aren't expected to go back up in the next 30 minutes, ERCOT then institutes controlled outages as a last resort, much like what Texans experienced in February and years prior.

A megawatt is enough energy to power about 200 Texas homes during peak demand, according to ERCOT.

Operating reserves were hovering around 2,800 MW at about 2 p.m. Monday. To check live demand and supply conditions on the grid, click here.

What triggered the tight grid conditions in Texas?

Temperatures that are sustained at what ERCOT defines as above-normal levels or are extremely high during the summer months can create problems if power generators experience outages or low power generation.

That's what was happening across the state Monday, ERCOT officials said, as a number of forced generation outages reduced the power supply at the same time that record electric use was expected this month with high temperatures across the state.

As to what caused the outages, Lasher said it's unclear.

Power generators that create about 11,000 MW were on forced outages due to repairs Monday, according to officials. About 8,000 MW of that is thermal while the rest is intermittent resources. ERCOT typically predicts the grid will have about 3,600 MW of thermal outages on hot summer days, a news release explained.

“We will be conducting a thorough analysis with generation owners to determine why so many units are out of service,” said ERCOT Vice President of Grid Planning and Operations Woody Rickerson. “This is unusual for this early in the summer season.”

At the same time, the state was experiencing some of those higher-than-normal temperatures.

Much of North Texas was under a heat advisory Monday as heat index values were expected to hit up to 107 degrees, though actual temperatures will likely remain in the upper 90s. The heat index hit 109 degrees at Dallas Love Field around noon Monday, according to the National Weather Service.

Temperatures at Austin's Camp Mabry were 95 degrees around noon, with a heat index of 103 degrees, per the NWS. Houston's Hobby Airport was at 95 degrees as well, though the heat index was 97 degrees.

Power generators expect the number of outages to go down as the week continues, and wind output is expected to increase as well. It was about 1,500 MW lower Monday than what is normally available during peak conditions, per ERCOT.

The council predicted back in March that it would be able to meet summer demand following the deadly winter storm in February that left millions without power for extended periods of time as the electric grid was overwhelmed.

During the news conference, Lasher said that he still stood by that summer assessment because the outages Monday were three to four times higher than typically expected during this time of year.

Officials did say they were expecting record-breaking demand on the grid come summer but had added they would have more reserves than years past and expected to have sufficient generational capacity to meet said demand.

ERCOT has five levels of grid conditions that alert customers of the current state of power supply.

2. Conservation alert (YELLOW) - There are potentially tight operating reserves, and customers are encouraged to reduce their usage when possible

3. Power watch (ORANGE) - Consumers and businesses are encouraged to reduce their electricity use "as much as possible" from 6 to 9 a.m. and 6 to 9 p.m., to help prevent electricity emergencies

4. Power Warning (RED) - Conservation is "critical" to avoid electricity emergencies or the need for rotating outage from 6 to 9 a.m. and 6 to 9 p.m.

5. Power emergency (BLACK) - ERCOT has issued rotating outages across Texas because there is not enough electric generation available. Rotating outages are "controlled, temporary interruptions of service, typically lasting 10 to 45 minutes." Customers are asked to reduce electric usage to the lowest level possible.

On Monday, the alert issued stayed in the "yellow" conservation level.