Two Aggies capitalize on wasted gas to mine digital gold

The bright flames roaring out of oilfield flare stacks may be a part of Texas scenery to you, but two Aggies see opportunity to get in on the digital gold rush. 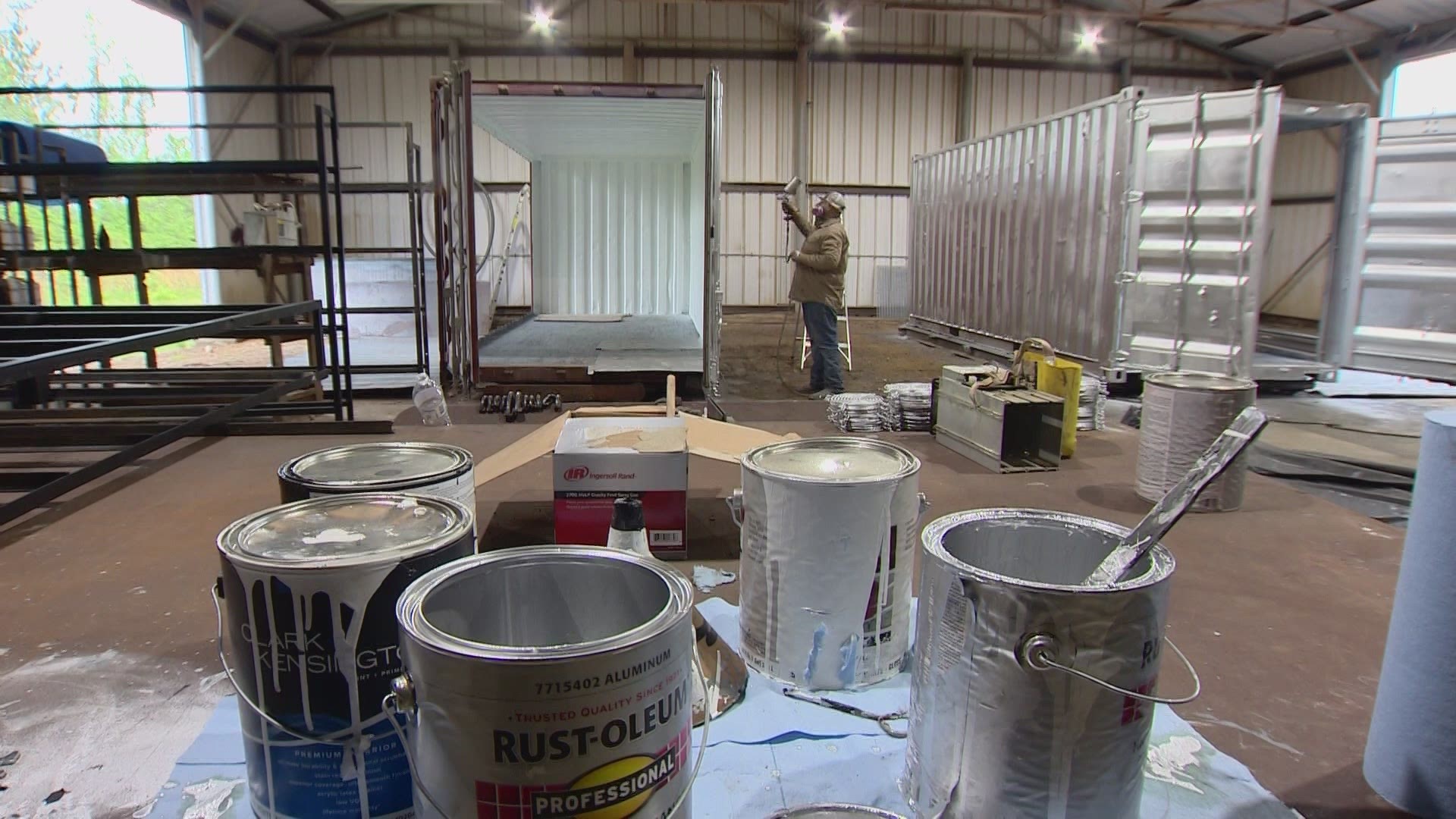 SAN ANTONIO — Out in the vast rural area of east Texas lies the private location of Matt Lohstroh and Brent Whitehead’s work shed. You’ll hear the hissing of spray paint or, at times, the crackling of welding inside. A scan of the shelves can be a confusing sight. Hundreds of small fans, empty metal containers, wires and computer boards are stacked on top of each other.

All these materials are integral aspects of their company, Giga Energy Solutions.

“We’re from (Texas) A&M, where everyone says 'Gig ‘em.' Giga actually stands for a metric of electricity, so the giga watt, which is 1,000 megawatts," Whitehead said. "We get a lot of people who say ‘Giga like A&M, I like that,’ and so, it’s kind of two birds, one stone."

They say their idea for the company progressed during their junior year at Texas A&M University. They decided to take a semester off to pursue their plan in 2019, when the two Aggies publicly launched the first company in the state to repurpose wasted oilfield gas in order to create the most popular digital asset in the world.

“We timed it perfectly with COVID, coincidentally, and really from January 2020 to August 2020, that’s when we had our biggest amount of growth,” Lohstroh said. “We were building and engineering everything.”

The cofounders' system operates in four steps. First, they take natural gas flaring, a process that’s intended to burn off environmentally harmful byproducts from oil and gas production, and redirect that flare to an engine. The engine combusts the natural gas and then generates that natural gas into electricity.

The immense amount of electricity that’s produced powers their computers to mine bitcoin.

“We ran into a lot of people, they said, well, you know, 'Why are you even making this? You’re making something that’s fake. You can’t touch bitcoin,' stuff like that. But our thing was it does have value,” Whitehead said.

“We know and believe that it’s here to stay and forever change our financial system and how the world operates,” Lohstroh added. “First step of the process, I would say, is start researching bitcoin and realize why it’s a $1.2 trillion asset class, and ever-growing.”

Bitcoin is a difficult asset to understand because its concept is multi-layered, from how it operates to how it alters the view of traditional money. A simple explanation is to think of bitcoin like gold, which is valuable and scarce.

But unlike the precious metal, bitcoin is a store of value that exists online. So far, there are 18.7 million bitcoins that have been introduced into circulation. Only 21 million bitcoins can ever be created. New bitcoins are made through sophisticated computers that solve complex math problems.

Lohstroh and Whitehead are operating computers that are called miners to “mine” new bitcoin.

Credit: Giga Energy Solutions
A look inside a unit where sophisticated computers known as miners are stored. They solve complex math problems to generate bitcoin.

The cofounders pack the computers inside shipping containers and position them near flare stacks to run the whole system. They received ideas from Stephen Barbour of Upstream Data, who operates a similar operation in Canada. But unlike the Great White North, the State of Texas has a hot and humid environment, and their computers which mine bitcoin produce immense heat. They had to go through months of trial and error to develop an efficient set-up.

In fact, the two bootstrapped their startup out of a backyard.

“We didn’t have anywhere to build it, we actually set a container in my parent’s backyard. We had cranes coming out, we had metal everywhere. It was just a total mess. I definitely owe them a lot for even allowing us to do it all,” recalled Whitehead.

Credit: Matt Lohstroh
Lohstroh and Whitehead started building their units in a backyard.

Giga Energy Solutions has received international interest from people in Saudi Arabia and Russia. They say multiple publicly traded companies in the U.S. have also expressed interest in their business.

But the excitement isn’t shared by everyone. After Lohstroh tweeted a video of their system in an oilfield and the post went viral, critics lashed out. They assumed the company was drilling for oil or argued that they were enabling oil companies to pollute the environment.

But the cofounders say their system is the solution.

“We’re saying, 'Hey we can take this gas, we can make electricity out of it, while also making sure that we get the best combustion rate possible.' We can get 99% combustion rate with our catalytic converters and our emission regulators that we have on our generators,” explained Whitehead.

“We’d love to be sucking up all the natural gas in Texas that’s being flared off. I believe there was a report that said there’s enough natural gas to be flared in the State of Texas to power the State of Texas," Lohstroh said. “We believe that natural gas and oil production is going to stick around for the next 100 years and natural gas flaring is merely a byproduct of a lack of infrastructure. We view (it as) this system is here to stay for a pretty long time."