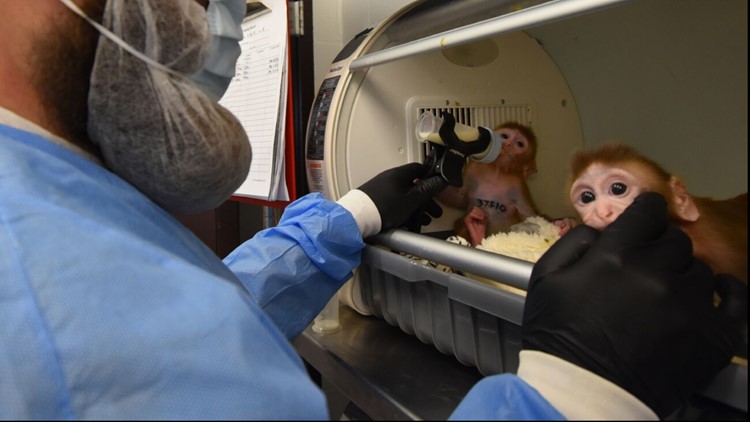 SAN ANTONIO — Parents create nurseries for their newborns, but researchers at San Antonio's Texas Biomed recently had the same task. The new bundles of joy weren't human, but instead monkeys, and the purpose went beyond providing a comfortable place to sleep.

They're hoping to carve a path to eradicate infectious diseases like tuberculosis.

Martin Carias and Joseph Roberts are both veterinary research technicians and were just two of the presenters at a research symposium today focused on studies conducted by the San Antonio organization. Last year they were given a special assignment. Carias told us, "We were given a project that was going to require infant macaque, and we did not currently have a nursery at that time so we had to put one together."

They had to make new homes for 24 infants. Roberts added, "Once we had everything we needed we did it in a day we were able to put the incubators together and the shelving that we needed."

So why use macaques for the six-month study? "Physiologically their bodies behave the same way as ours do," said Roberts. Bodies these two researchers watched grow from day one, treating them like their own children. Roberts continued, "They grow up super fast and they are super smart, and they all have different personalities, so we get to know them really well."

They even taught them how to eat. "We made them self-sufficient so they could feed off of the bottles that we had for them," said Roberts.

Inside the incubator, they used phone holders for a car to hold a bottle of formula with food which is made of Similac. But, they prepare it in a very special way. Carias told us, "We actually had to use distilled water for them when we made their formula, just because tap water could have things in it."

Things like pathogens which need to stay out because healthier animals make for better biomedical research with more accurate results. Roberts said, "As scientists, we want to limit all of their variables to make sure what you are studying, the cause and effect, is directly correlated to what you are studying."