On Tuesday, the VET unveiled a new addition to its vehicle fleet that will help expand the team’s capabilities. 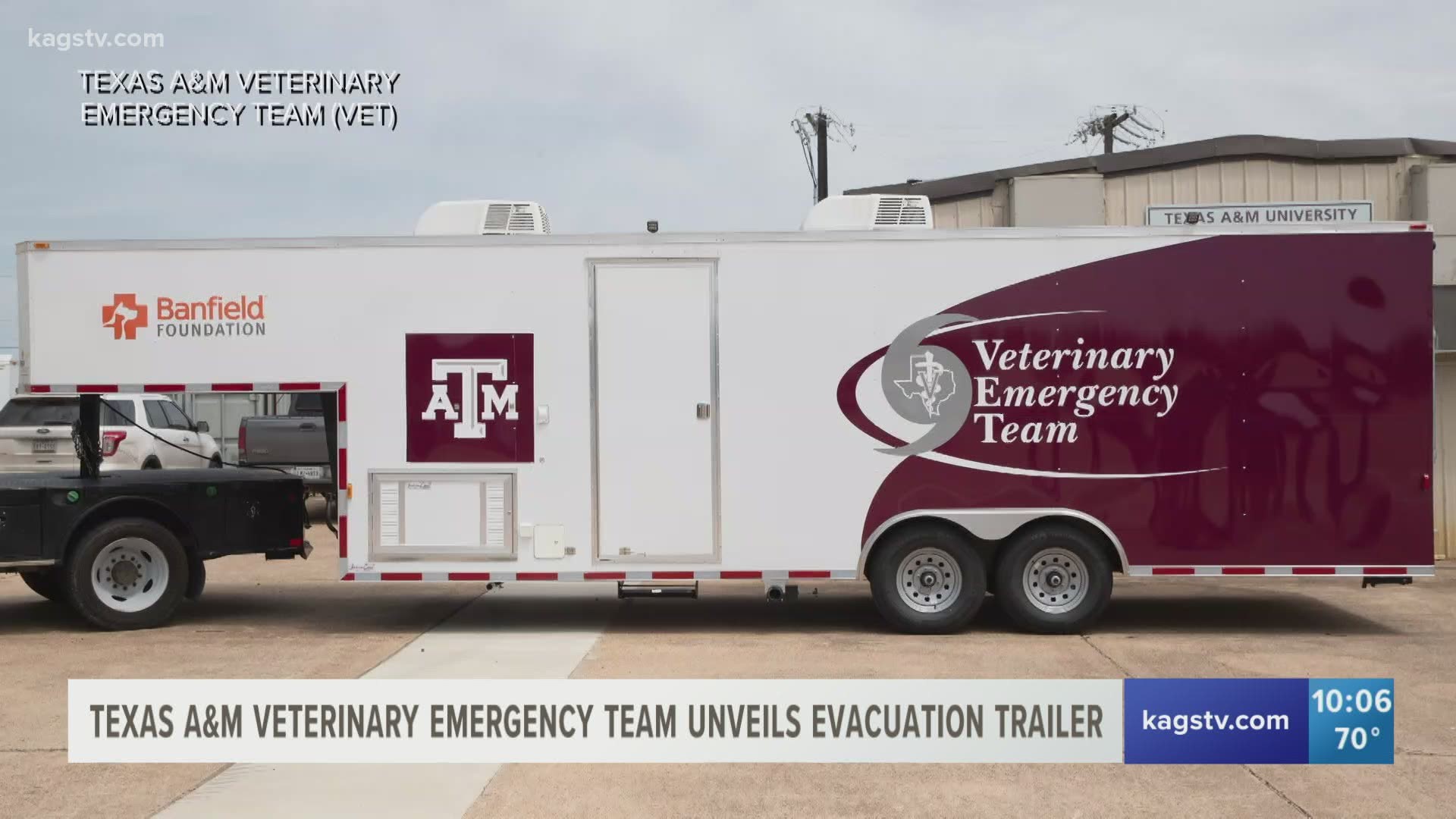 COLLEGE STATION, Texas — Since 2011 the Texas A&M Veterinary Emergency Team, or the VET, has cared for thousands of animals while responding to areas impacted by disasters like hurricanes and wildfires.

The VET showcased its new 28-foot trailer, the second vehicle donated from the Banfield Foundation, a non-profit organization.

This climate-controlled trailer will largely be used in the evacuation of animals from areas most heavily impacted by disaster.

Dr. Wesley Bissett, Director of the VET, said this trailer is different from the rest of the fleet and can deal with things the other vehicles can’t.

“We can provide a separate space, for example, we can separate the cats from the dogs,” Dr. Bissett said.

Today we’re unveiling a new evacuation trailer that will allow the VET to go into heavily impacted areas and move animals to a safer location. Thank you to the Banfield Foundation for the continued support! #TAMU #TAMUVEThttps://t.co/vatRJfhKls pic.twitter.com/aOPXXQA963

Dr. Bissett said has a 30-gallon freshwater tank and two exterior floodlights so the vehicle can be used in any conditions at any time.

“Ideally, we’re looking at this unit as a transportation and a housing unit rather than a treatment unit,” Dr. Bissett said, “We’ve got other units that are specifically designed for that and we’ve used our space in a different way.”

Garrett Carr, the VET Logistics Supervisor said in the beginning, they had a good idea of the functionality they wanted out of the unit, after that, it was all about finding the right items needed to make it all work.

“We were able to find a company that specializes in animal containment in mobile rigs,” Carr said.

Dr. Bissett said if the trailer is needed tonight, they could use it tonight and Carr said he thinks the trailer will provide a lot of help to the things they haven’t been able to accomplish before.

“We can send all our medical equipment to set up a base of operations while that trailer is doing its thing, you know, in the meantime,” Carr said.

Dr. Bissett said he’d like to thank the Banfield Foundation and the Texas A&M Foundation for supporting the VET and making things better for an animal when it’s having the worst day of its life.