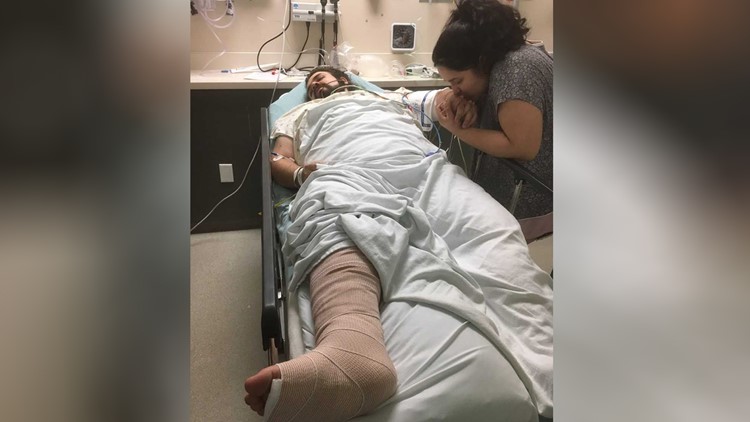 Benjamin Munoz and Abril Cardenas are suing the Iconic Village Apartments after they sustained injuries escaping from the deadly fire.

SAN MARCOS, Texas — A lawsuit claims residents of the Iconic Village Apartments awoke to the sounds of screams and breaking glass instead of fire alarms on the morning of July 20.

The fire killed five people and left others injured. Now, four of the people who were injured — Christina Martinez, Pablo Torres, Benjamin Munoz and Abril Cardenas — are suing the property manager and the companies that own and operate the apartments. A fifth plaintiff is a family member of James Miranda, who died in the fire.

The lawsuit alleges that the fire alarms in the complex failed to activate during the fire. Inspection reports from the City of San Marcos indicate there were not functioning fire sprinklers or other fire suppression systems.

The suit is asking for compensatory damages for the victims and their families, as well as punitive damages against the apartments, which failed to maintain and install proper fire safety equipment, according to the lawsuit.

Benjamin Munoz and Abril Cardenas were trapped by flames in an apartment on the second floor of the complex. They were forced to jump out down as flames approached, according to lawsuit documents. They sustained severe injuries, including a broken leg, broken ankle, as well as injuries to their backs, neck, and other parts of their bodies.

Originally, Munoz was scheduled to graduate this month, but because the fire turned his life upside down, he’ll have to complete classes in the fall. “There was a plan for me to walk early,” he said, “but I told the school that when I walk for graduation, I literally want to be able to walk.”

Cardenas and Munoz had talked about getting married, but Munoz had promised himself he wouldn’t get engaged before graduation. After the fire, he decided “life is too short.” He proposed before going into surgery for injuries sustained in the escape. She said “yes.”

Kurt Arnold from Houston-based law firm Arnold & Itkin represents five victims of the fire. Arnold says, “The owners and management of Iconic Village knew there were glaring safety concerns, and they choose to do nothing, and now people are dead and lives have been turned upside down. We’re going to make sure they are held accountable, and we will make sure they never allow a senseless tragedy like this happen again.”