A remarkable Churchill High School Junior could be competing for a gold medal in figure skating in a few years. This year's winter games are inspiring Austin Borjas-Ewell to continue pursuing his own Olympic dream. 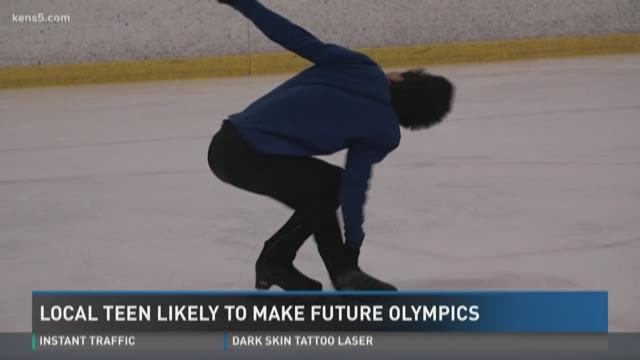 A remarkable Churchill High School Junior could be competing for a gold medal in figure skating in a few years. This year's winter games are inspiring Austin Borjas-Ewell to continue pursuing his own Olympic dream.

Watching Austin on the ice, you’ll notice a smile spread across his face as he glides around the rink. That grin very well could be on a cereal box in a few years. The success is thanks to a lot of hard work.

"I skate for myself personally and I enjoy what I do so no matter what people say, I leave it all out on the ice,” said Austin. “I know in the end I'm doing things that a lot of people never get to experience."

There is no tally of how many times Austin has fallen, how many bruises have healed or how many hours he's spent at the Northwoods ice rink.

"To see him push himself to be so self-motivated, so self-driven, there' no one like him," said his secondary coach Stacy Shoeman.

Austin has had to push past a lot of negative comments.

Head held high, the teen says he has seen a change in the nay-sayers.

"It went from people talking down on me to people asking when I'm going to be in the Olympics," said Austin.

His coaches vouch that Austin is a star.

"Everybody says ‘oh, I'm going to the Olympics’ and you know 99% of them don't,” said Cindi Ezzo, his primary coach. “He's got the drive, he's got the work, he's got the talent so yeah, he could do it."

Austin already has a U.S. Figure Skating gold medal for the southwestern region of the intermediate division.

"Getting my hands on the gold medal and being the first one to ever win a gold for our club was probably the most exhilarating thing I could have experienced," said Austin.

In about two years he hopes to compete on an Olympic level. The Senior division determines who is on Team USA.

"We have a great group of members in our club. Austin is just one example of hard work, determination, discipline can really take you places," said Joanie Perciavalle with the San Antonio Figure Skating Club.

Austin's discipline has been even more evident this month as the Olympic events inspire him to push harder to make it onto Team USA.