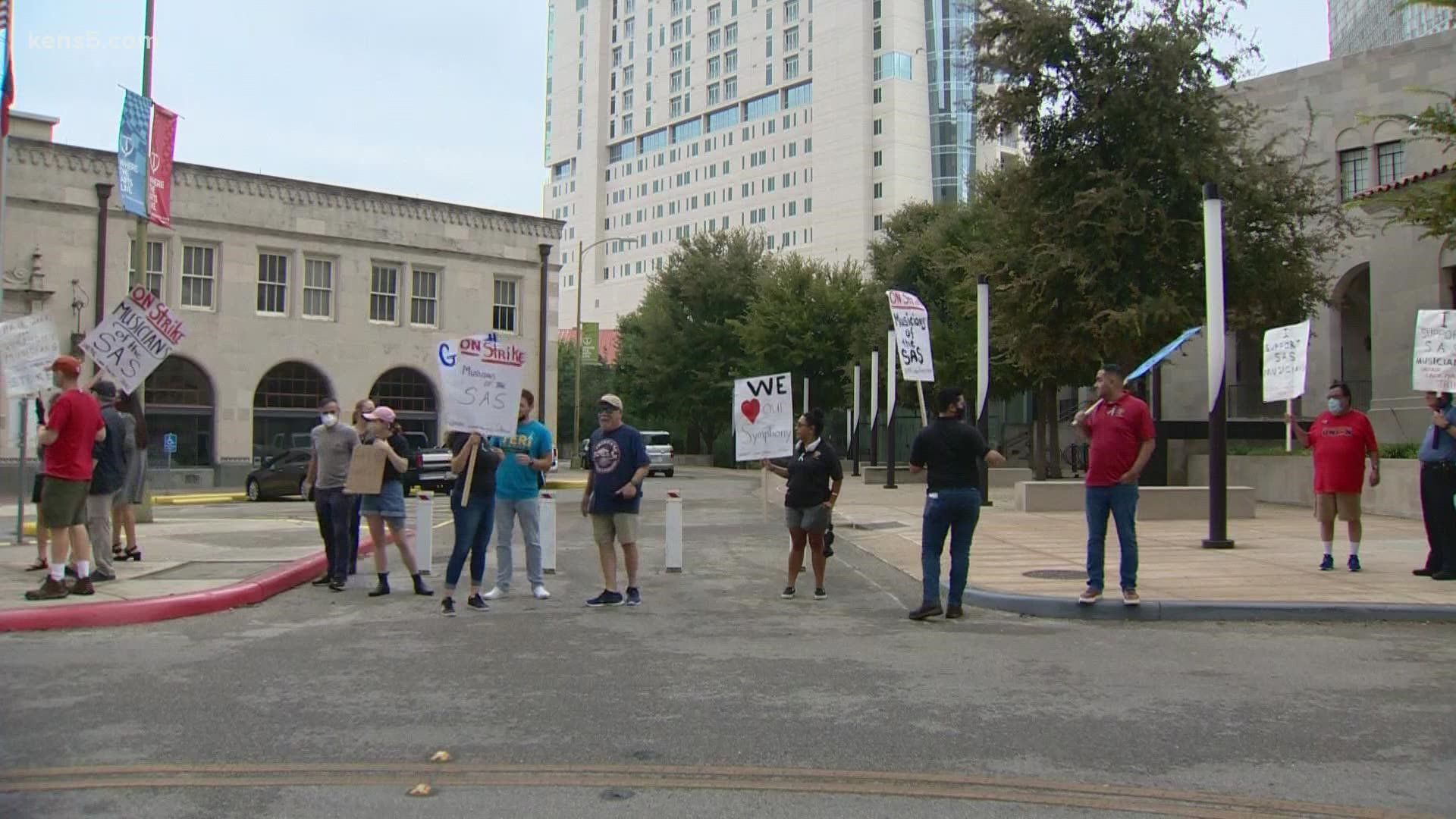 If performers and the symphony board cannot reach a new compensation agreement, musicians say there's a possibility San Antonio loses its orchestra altogether.

"We will not be complicit in our own destruction," said Mary Ellen Goree, a violinist negotiating on behalf of the other musicians. "We are always willing to go back to the table and listen to any reasonable proposal. But what they have imposed, it would not save the symphony as they say it would. It would destroy the symphony."

Mired in red ink, symphony administrators have proposed deep cuts to the orchestra.

To balance the books, they'd cut four positions, make another 26 performers part-time without benefits and cut the remaining 42 musicians' salaries by roughly a third.

The musicians unanimously shot down this proposal, Goree said, prompting the symphony board to declare an impasse in negotiations. That move essentially made the society's proposed cuts effective.

In response, the performers went on strike.

"The Symphony Society of San Antonio remains eager and willing to continue to bargain in good faith with the musician's union and are awaiting meeting dates form the union to formally proceed in the negotiations process," the society wrote in a statement. "The board has a responsibility to ensure the Symphony is both artistically and financially strong for our audiences, community, supporters, and musicians for years to come."

Goree says negotiations have already prompted some musicians to explore opportunities elsewhere. Many came to San Antonio to work, full-time, for the symphony, she said.

The violinist contends the board's proposed cuts would end the orchestra. A continued impasse might have the same effect.

"I don't like the idea of Amarillo having a symphony and us having nothing, or a piano and a harpsichord," former Mayor Phil Hardberger said.

Maintaining a vibrant orchestra is of the utmost economic importance, Hardberger said.

"It's all part of the mosaic of having a competitive, creative city," he said, adding that cities with thriving arts scenes are more likely to secure big business investment.

A spokesperson from Frost Bank, one of a handful of iconic companies headquartered in San Antonio, echoed that sentiment.

"We recognize the importance of arts and culture to San Antonio’s economic development," he said. "The arts play a big role in attracting people and organizations to the area, and we’re hopeful that the Symphony will remain part of our city."

Hardberger says he once underestimated the value of the arts, but soon learned corporate executives appreciate cultural vibrancy.

The former mayor likened the current proposal from the symphony society to decapitating a person for weight loss's sake. He said some cuts may be necessary, but added the board should try to tap into more businesses for donations.

"Right now, to be quite honest, I imagine it's an underdeveloped market," Hardberger said. "If you give it half a chance, I do think the business community will support it."

But Hardberger also suggested the orchestra might be too generous, perhaps performing charitably for less than it could otherwise generate.

"A city with a good orchestra has a lot better hand of cards to play in general," he said. "Reputation in cities is as important as reputation in business or in personal lives."

"We need to have the reputation of a good cultural city—that we're a creative city and that we're smart," he concluded.