A brewery owner is accused of mishandling funds after giving funds raised through a social justice campaign to his personal trainer. He says the issue is resolved. 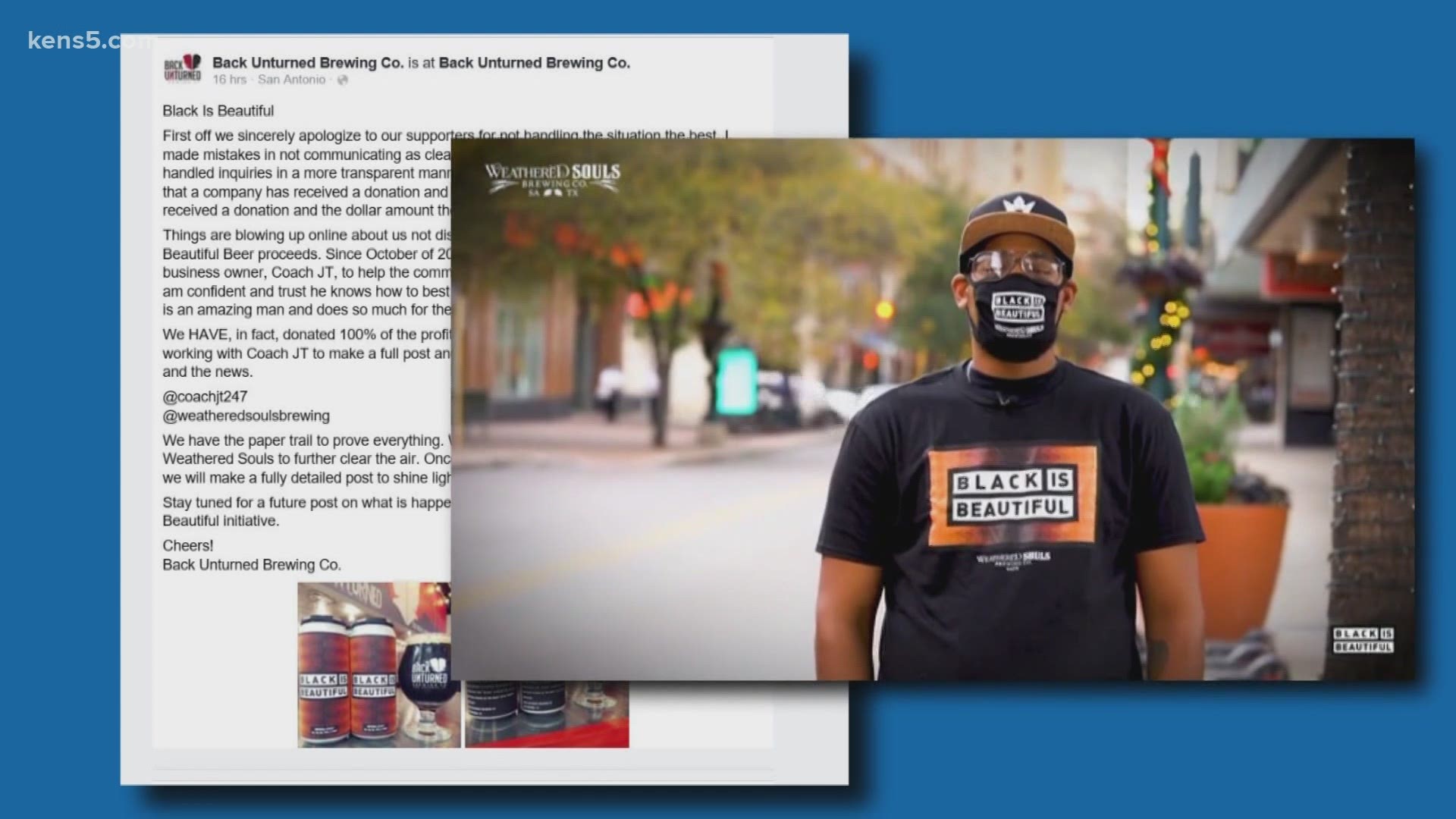 SAN ANTONIO — Editor's note: The above video was published March 5.

A local brewery owner embroiled in a donation controversy announced that he’s given all of the proceeds to the NAACP.  He was previously accused of mishandling funds by giving it to his personal trainer.

Ricardo Garcia, the owner of Back Unturned Brewing Company, who participated in the campaign faced backlash from community members on social media. They accused him of remaining silent about the allocation of the funds he raised through beer sales. In one social media post, a person took a screenshot of a conversation between him and Baskerville where he failed to disclose funding information.

Garcia addressed the accusations on the brewery’s Facebook page. He admitted that he gave the proceeds to his personal trainer, who goes by the name Coach JT Garcia explained that the coach was going to use the money to help the community to support underprivileged children of color. The coach made a separate video post to explain his side. He said he wanted to start a non-profit organization to help children succeed and reach higher education. Coach JT said he believes Garcia’s intentions to give him the money were pure.

KENS 5 reached out to Back Unturned Brewery for comment March 5. The brewery responded said it would be making a full disclosure post that day but there was no explanation online. March 13, Garcia made an announcement on the brewery's Facebook page that he has met with Baskerville to resolve the situation. He said all of the proceeds from the Black is Beautiful beer will be donated to the National Association for the Advancement of Colored People (NAACP).

Garcia says additionally, he has given the same amount of money to Coach JT to help him forward his initiative. Here’s Garcia’s full post:

Back Unturned Brewing Co. and Weathered Souls have been communicating directly with each other to resolve the situation at hand. We had a great meeting yesterday at Weathered Souls to make amends and move forward. 100% of the profits from our Black is Beautiful beer have been donated to the NAACP.

Ricardo here to clarify and answer questions that have risen regarding my handling of our BIB donation, my lack of transparency with Marcus, and how we will be moving forward.

I first want to acknowledge and take full responsibility for how I handled the situation. The staff at Back Unturned were unaware of my plans for the proceeds donations, and I ask that you please not take my transgression out on them or allow this to be a reflection on their reputation. I have a great group of folks that work with me and whom I appreciate more than they know.

My lack of transparency in response to Kim and Marcus regarding our BIB donation was unprofessional and came from a place that had nothing to do with the initiative itself. I made it personal and acknowledge this response was wrong. After screenshots of Marcus and my interactions were posted the direct messages began coming in and I mishandled the influx of comments by blocking and deleting. I’ve been working with Coach JT for a while and when JT told me of his dream to start a nonprofit to provide athletic training for underprivileged youth in the community as an outlet and mentoring opportunity, I instantly wanted to help. That is why I chose to work with JT and learning from all this, I should have involved Weathered Souls from the beginning on the idea.

I can understand that from some viewpoints that donating the funds to an individual may seem to have missed the mark or not be in alignment with the BIB initiative, and after talking it through with JT, these funds have been r-channeled to the NAACP. I do want to clarify, however, that I am following through on my commitment to Coach JT as well and will still be providing him funds to support his nonprofit initiative. I apologize to my staff, our patrons, and the BIP initiative.