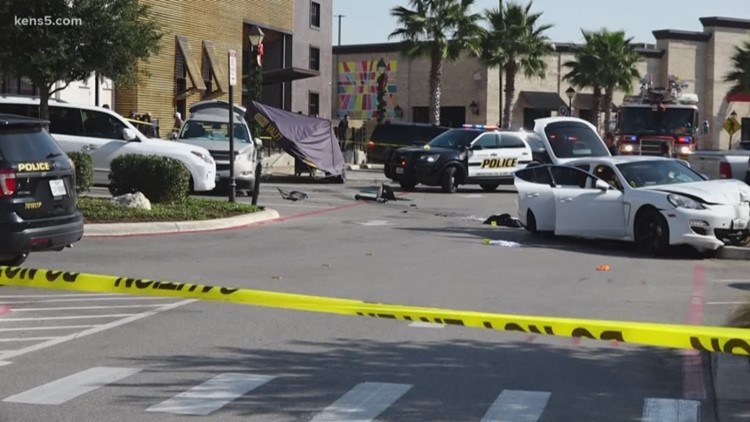 The San Antonio Police Department responded to a shooting at The Rim Shopping Center on the northwest side Sunday.

Authorities said witnesses reported a black sedan pulling up and firing multiple shots at a white Porsche. A 26-year-old man and his 8-year-old son were in the car at that time.

"What we do know, from the son, is he and his dad were going to breakfast," SAPD Officer Alisia Pruneda said. "The 8-year-old was uninjured. However, the victim who was driving, a 26-year-old black male, was shot, possibly multiple times." The man was later identified as Savawn Kyle.

Authorities said Kyle was taken to a hospital with life-threatening injuries. Police are continuing to search for the black sedan. Witnesses reported to law enforcement that there were multiple people in the suspects' car.

Police told KENS 5 the shooting was not random. Kyle has criminal record that could have made him a target. Kyle was a murder suspect whose case was dismissed last year.

In Kyle's latest music video posted on YouTube, you see the same car that was damaged at The Rim.

"We narrowly missed it, narrowly, thank goodness," Chris Lyssy, a diner, said Sunday afternoon. She sat outside on a bench worried she could have been one of those innocent bystanders. She and her husband parked their truck just feet away from the crash a minute before it happened.

An eye-opener that served as a harsh reminder to always be vigilant as onlookers thoughts went to the victims.

"I really just hope that that man’s okay by some miraculous chance," a witness told KENS 5.

"I'm sorry that it ever happened," Lyssy added.

"We are working closely with SAPD as they investigate what appears to be an isolated shooting incident between two individuals that randomly ended in our parking lot. We value the safety of our patrons and are proud of our exemplary safety record. The RIM security force is in regular coordination with local law enforcement year-round, and even more so now, during the busy holiday shopping season."

'She wanted to do good for others': South Texas mother and businesswoman who was missing for months is laid to rest

Winter flu season is here early, could be intense