“Regarding the improper booking, our initial review indicates that the arresting officer was injured due to the suspect’s violent resistance," the police department's public information office said in an email.

"Because of this, he had to go to the hospital and another officer was tasked with transporting the suspect to jail. As a result, there was a communication breakdown between the officers regarding paperwork related to the parole violation warrant. However, the Texas Department of Criminal Justice (TDCJ) Austin Parole Division sent notification to two TLETS terminals at the Bexar County Sheriff’s Office Sergeant’s booking desk.

"This is done as a failsafe measure to ensure that the BCSO is informed of the warrant in the event that paperwork is misplaced or missing. SAPD has advised BSCO of our findings and we are working with them to prevent similar issues in the future.”

The agency provided KENS 5's Eyewitness Wants to Know team with the notice sent to the Bexar County Sheriff's Office the morning of Garza's arrest. 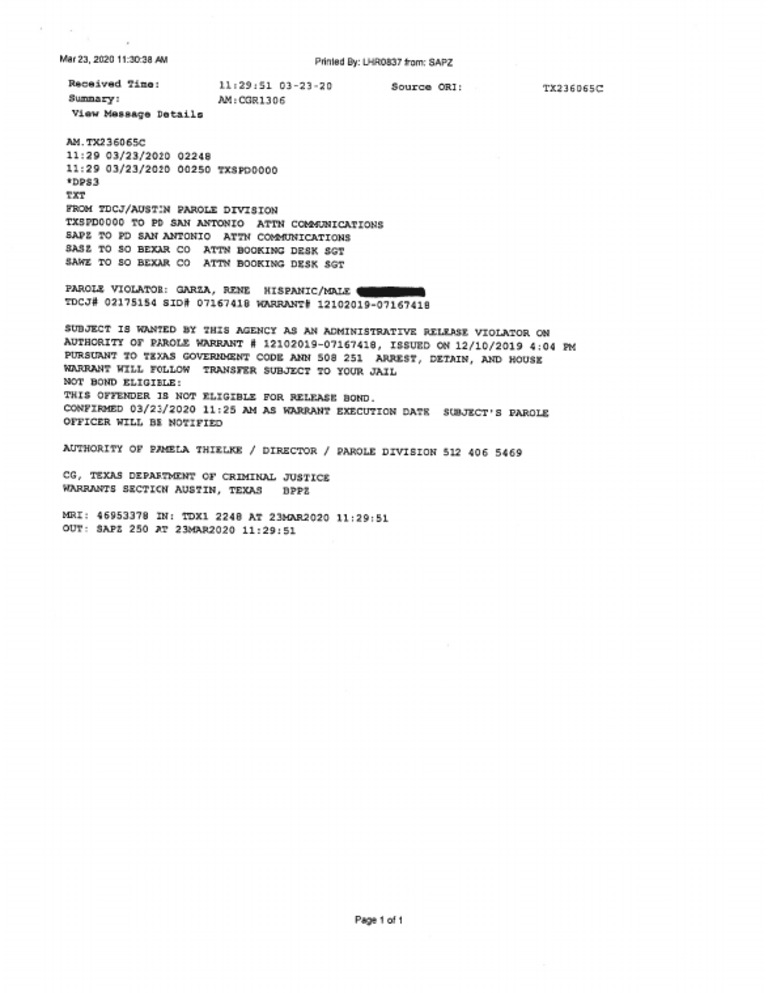 Parole Violation Notice
Discover everything Scribd has to offer, including books and audiobooks from major publishers.

A spokesman for the sheriff's office said Wednesday afternoon deputies were still looking for the offender, whom they described as non-violent.

A police report for the incident for which Garza was arrested states that officers were following a car Garza was a passenger in that was believed to be stolen. Officers confronted Garza in the parking lot of the Target shopping center off of Loop 410 and Fredericksburg Road when Garza ran from officers, the report states.

According to the police report, both officers deployed their Tasers at Garza, and he eventually slowed down. The report states one of the officers tackled Garza and was injured in the process; the officer required x-rays and treatment at a hospital.

KENS 5 reached out to the Sheriff's Office on Wednesday evening for a response to the San Antonio Police Department's documentation, and they released the following statement:

"BCSO had neither tangible documents, nor any indicator Garza had a warrant. Coupled with the fact that the warrant had been cleared earlier, there was no way for deputies to know Garza was wanted. There was nothing erroneous about the release."

Initially, the Sheriff's Office sent KENS 5 the following statement, to which the San Antonio Police Department responded with a statement of their own and documentation:

"This was not an improper release, but rather an improper booking by the arresting officers.

Rene Garza, 32, was arrested by SAPD on March 24, 2020, and transferred to the Adult Detention Center for booking on his non-violent charges, Evading Arrest and Possession of a Controlled Substance. It appears the warrant was cleared from the system prior to arrival in our facility. There was no documentation provided to BCSO to indicate a warrant existed.

Garza received PR bonds for his charges and was processed for release.

At approximately 3:30 p.m. on March 24, 2020, the State Parole Board called the booking intake desk asking if Garza was in our custody, due to having a parole violation warrant.

The Parole Board was informed that when Garza was initially checked for warrants at 7:30 a.m. on March 24, 2020, prior to release, there were no active warrants.

As a result of the warrant being improperly cleared prior to Garza’s arrival at the Adult Detention Center, the State Parole Board has since activated Garza’s parole violation warrant.

Additionally, the Texas Commission on Jail Standards (TCJS) has informed us that this incident is not an erroneous release.

BCSO has advised SAPD of our findings and we are working with them as needed to prevent similar issues in the future.

RELATED: Police looking for suspect who tried to grab a woman at Target