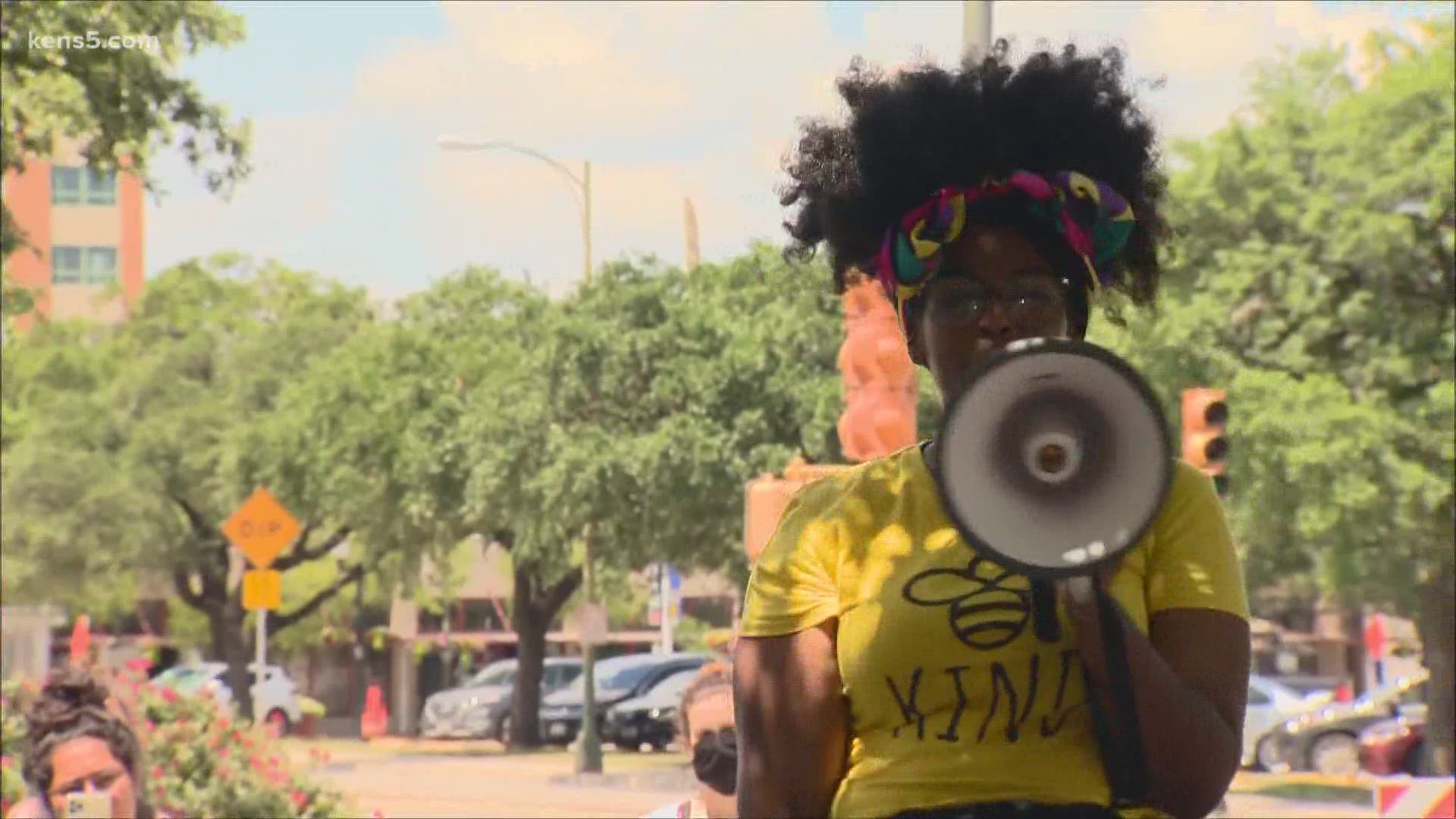 SAN ANTONIO — Kristen Calahan has made it to several of this week’s downtown San Antonio protests decrying police brutality and demanding accountability for the death of George Floyd at the hands of a former Minneapolis Police officer. When she decided to organize her own for Saturday, she didn’t expect more than some close friends and a few supporters to show up.

“I showed up, I was by myself, and then this guy started unloading waters from his trunk,” said Calahan on Saturday afternoon, about an hour after what would turn out to be hundreds of Black Lives Matter supporters marched through the heart of town, for the eighth straight day, to chants of “No justice, no peace!” and “This is what democracy looks like!”

Supporters of all backgrounds convened, as has been the norm this week, outside the San Antonio Police Department’s headquarters, braving a scorcher of a June day that saw temperatures rise above their average highs for this time of year. Most came with signs (and about as many with face masks) to hear from Calahan and others provide personal testimony, connect with other allies, and provide their signatures on a petition to be handed to city leaders at some point in the future.

And while she and everyone around her was marching against ugly realities of racial injustice, she said the sense of community brought hope for change.

Leaders of Saturday’s rally emphasized multiple times that they wouldn’t tolerate acts of violence that would muddle their message, instead vocalizing frustration with the status quo in their words. In one of several stories that were shared Saturday, one participant said he was targeted as a young child in school by police who assumed he may have had drugs in his backpack just because he had brown skin--an experience he said he noticed didn’t happen to his white-skinned peers.

Another protester spoke out against media corporations whose solidarity with Black Lives Matter has been limited to PR statements and social media posts, saying that more is needed to enact widespread change.

That demand for accountability was also extended to city leaders. On Thursday, Mayor Ron Nirenberg briefly addressed protesters outside the Bexar County Courthouse, pledging change in an impassioned speech and signaling that he was just as fed up at the lack thereof.

Two days later, Saturday’s protesters noted his lack of presence since that moment, with some yelling out, “Where is he now?”

“I want them to keep showing up,” said Katelyn Mendard, who helped lead Saturday’s rally. “We’re all fighting for a good cause. If they come out more than once, they would see that, and hopefully that’ll impact something on their heart to be like, ‘Maybe we need to do something.’ If we’re doing this, hopefully they can come out here more than once, and not just for the media. Maybe come out with no media and just be amongst the people."

Before taking to the streets, protesters stood, knelt and sat silent for 8 minutes and 46 seconds, or the amount of time that George Floyd repeatedly had a police officer’s knee on his neck before he died. In one area, a volunteer medic was making sure people stayed hydrated and sanitized. Off to the side, a grassroots group calling itself the Radical Registrars was answering questions that participants may have about upcoming elections and what to do to register to vote.

And, after returning from the march under a blazing San Antonio sun, the group listened to more testimony before proving the heat didn’t deplete their energy, starting a mini dance party to the lyrics of Michael Jackson and Childish Gambino.

“It just shows the power of the people,” said Morgan McCray, a Black Lives Matter ally who said Saturday was her first time taking to downtown’s streets. “Seeing the number of people that have showed up all throughout the United States at protests in every single state, it’s making me proud to be part of a generation that is willing to speak out against a government that is not abiding by what its people want.”

Before the event ended, organizers told attendees to keep their eyes on social media channels; San Antonio may have gotten familiar with the chants of “Black lives matter” over the past week, but there’s no indication that Day 8 was the final afternoon of demonstrations.

“I even had people (who said) this was their first day showing up, and they’re telling me they’re going to show up until we’re done,” Menard said. “And I don’t know when we’re done. But once I see change, that’s when we’re going to be done.”

Here's some of our most recent coverage of George Floyd, and the nationwide protests that have unfolded after his death:

Recap our real-time updates below:

The organized Black Lives Matter protest is wrapping up peacefully in downtown San Antonio, with demonstrators dancing together.

One sign at the protest in San Antonio listed names of dozens of victims of police brutality and racism.

About 200 protesters have begun an 8 minute, 46 second moment of silence. The group will then march through downtown San Antonio.

“We’re gonna be out here until we get this done,” a 24-year-old speaker said at today's rally.

The temporary curfew for downtown San Antonio has been lifted amid an eighth straight day of protesting racial injustice and demanding accountability after George Floyd’s killing.

At least 100 demonstrators have gathered outside SAPD headquarters in downtown San Antonio for an eighth straight day of protesting racial injustice and demanding accountability after George Floyd’s killing. Lots of water on hand on a hot Texas afternoon.