The Boy Scouts of America couldn't continue without people like Evelyn and Marcelino Mendoza, troop leaders who truly lead by example. 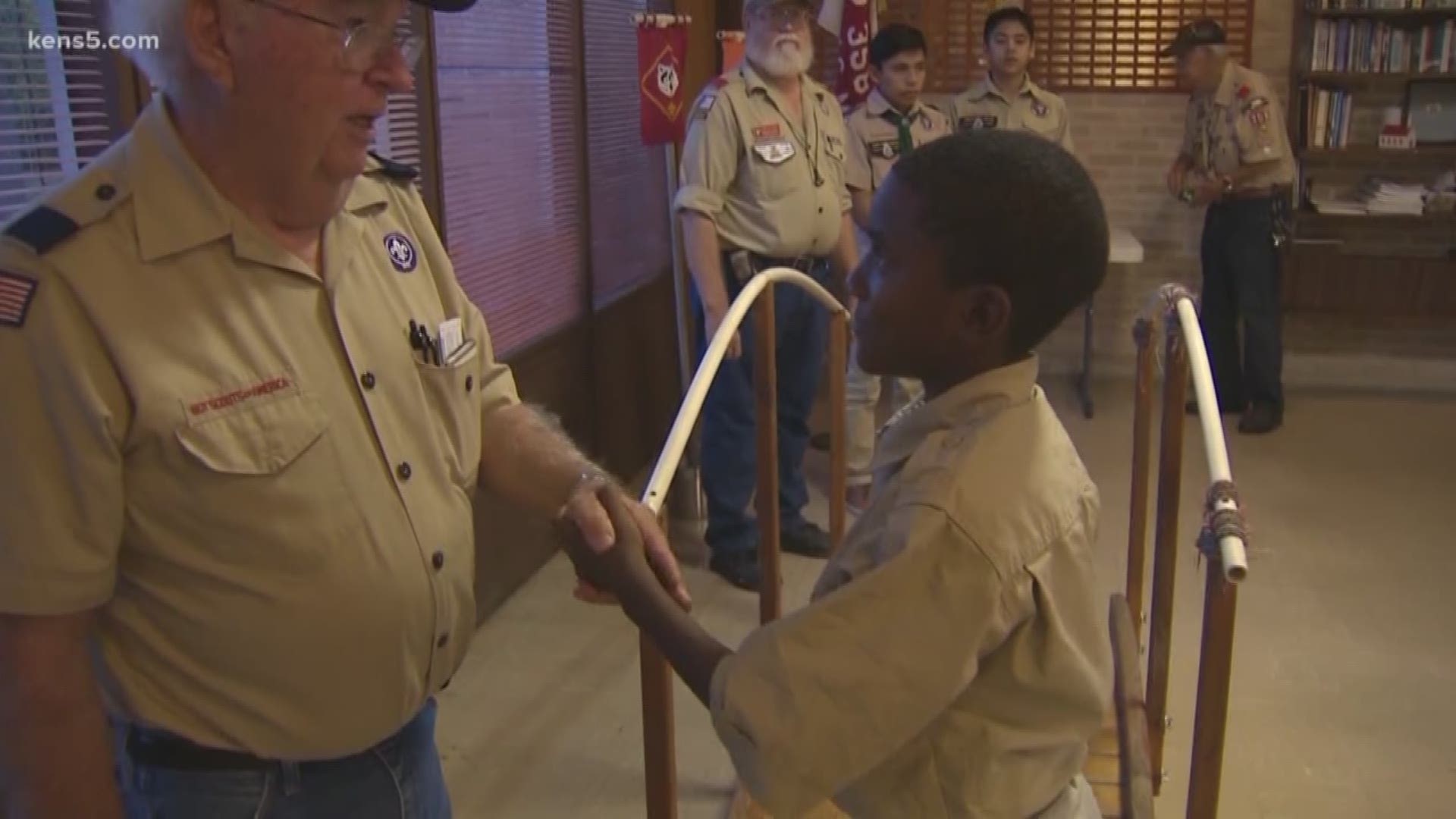 A young boy in a Boy Scout uniform walks across a small wooden indoor bridge to symbolize his transition from Cub Scout to Webelo. Next, he’ll become a Boy Scout.

"It gives you a sense of accomplishment,” Scoutmaster Evelyn Mendoza said. “To see a young man learn the different things he needs to learn.. to advance."

The Boy Scouts may be the best-known American organization promoting patriotism and purpose, and giving boys positive reinforcement.

At Boy Scout Troop 358, young men advance under the leadership of husband and wife Scoutmasters Marcelino and Evelyn Mendoza. They've led this Troop for 40 years, longer than any other Troop leaders in the Alamo Area Council. He's almost 80.. she's a little north of that.

The Troop meets in the Fellowship Center at Epworth United Methodist in southeast San Antonio.

"I just believe in it,” Marcelo said. “I want to continue doing what I'm doing."

Years ago, the Mendozas’ two sons, Hector and Sergio, earned Eagle, the highest rank in Scouting, and the Mendozas just kept at it, helping more boys advance.

"I think we're blessed, because the things that we're doing at our age? Other relatives and friends our age are going into nursing homes," Marcelo said.

Not these two. Despite his quadruple bypass and dialysis three times a week, and her diabetes, they lead every Troop meeting every week. And, with parents' help, encourage every boy to shoot for Eagle.

"We're gonna try to do our best so that they [all] become future leaders, and that's all we can do,” Marcelo said.

And at Troop 358, these future leaders have a better-than-average chance to advance to Eagle. The Troop's produced 132 Eagle Scouts so far. That’s one of the highest totals in south Texas. Nearly 20 percent of the boys in this troop earn Eagle rank. Nationwide, only 1% of Boy Scouts earn it.

Brass plates on a sprawling wooden plaque commemorate every Scout from Troop 358 who made it to the top. "That's our goal,” Marcelo said. “Every Scout that joins the scouting program becomes an Eagle Scout."

Robert Angiano can attest to the Mendozas’ Eagle work ethic. Both of his boys earned Eagle in their Troop. “They have a drive, I guess... for volunteering, just in their spirit or in their soul to keep on pushing forward," he said.

Parents like Angiano will tell you that it's not easy. Eagle rank requires years of commitment, including camping trips, merit badges, learning leadership and survival skills, and demonstrating responsibility. In the end, there's a required Eagle Project, which is a major service project the Scout proposes, plans and executes with the support of a small team. The Mendozas helped Patrick Angiano build a walking trail at Mitchell Lake Audobon Center.

And the Mendozas have no plan to slow down now. "How much longer?” I ask Evelyn.

She glances at the ceiling. “God will tell,” she laughs.

"We want to continue working for youth,” Marcelino said. “To me, I'm helping the future.”

They're both helping the future by turning out young leaders, one Eagle at a time. That's why the Mendozas are two more of the people who make San Antonio great!