Meadow Quigley applied what she learns in her Construction Careers Academy to two busted pipes. She fixed the leaks then got flooded with attention. 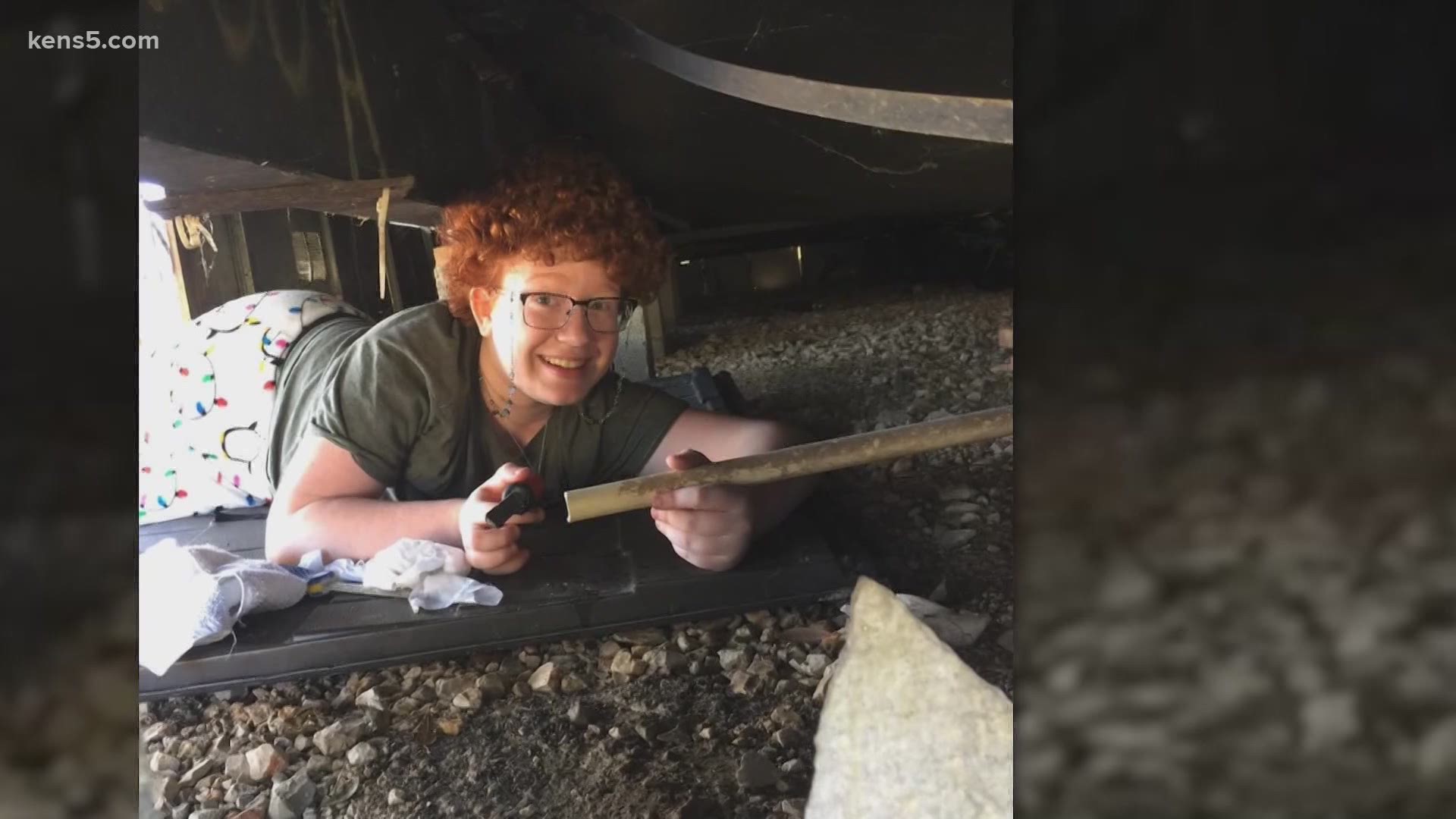 SAN ANTONIO — Meadow Quigley's family were among those who suffered from uncomfortable living during the 2021 winter storm in Texas.

They became victims of the frigid temps, ice, and the cold-weather fallout.

"It got so cold that that---I mean--- my two-year-old, his hands started to turn purple," Tracy Sinha said.

Sinha is Quigley's mother. Two of her sons are autistic. She's pretty sure her youngest will receive the same diagnosis.

The family packed up and moved in with the children's grandparents until things got better.

"We can be pretty loud," Quigley said. "And it's usually just my grammy and my poppa and their two dogs at their house."

In a visit to their mobile home not far from Talley Rd, Sinha noticed burst pipes.

Two of their pipes shot water out everywhere. The 15-year-old used the skills taught at Northside ISD's Construction Careers Academy to repair the leaky pipes.

"We just cut off the broken pipe, sanded it down some, cleaned it off, and put some primer and glue on it," Quigley said.

With $7 in repair material, she made her very first professional repair. It got her brothers back to their comfort of home. Grammy and Poppa were back at peace.

Sinha, who became her daughter's assistant during the repair, documented her girl in action.

"It's not just your mom saying that you're great," Sinha said. "People think you're great."

Quigley is bashful. She is also the eldest of nine children between her mother and father. Some are step-children.

Sinha said as the oldest, her daughter takes on responsibility and never seeks an accolade. The Facebook post was about giving her daughter a 'shout out."

"Meadow does struggle with her self-esteem," she said.

That has not stopped the NISD student from pursuing her interest in plumbing and welding. But 'Miss Fix it' is not anxious for moments in the spotlight.

"I was just fixing pipes," Quigley said. "That's literally what I'm in school to do."

She's concentrating on school, family, and walking right out of school to a job using her trade skills.

"It's kind of old-fashioned for there to just be jobs for boys to do and jobs for girls to do," Quigley said.

Her viral got the attention of local plumbing companies. One gave her a toolbox and a belt. Sinha said she is talking with another company about a summer internship program.

There's even a GoFundMe page to invest in her education.

"That's going to always be her story of her first repair was during this massive storm in Texas that was historic," Sinha said. "It give me chills. I got chills right now because of that."