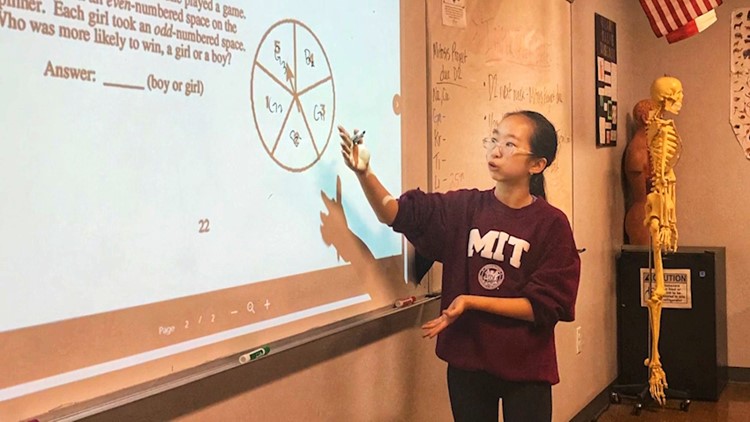 Photo by: Courtesy: Hannah Guan
Hannah Guan is an international math champion who wants to become a math teacher.

SAN ANTONIO — Hannah Guan is the first to tell you she didn’t like math, at first.

“My mom signed me up for this the math club at my school,” Guan said. “And I remember that I was distinctly unwilling to go. I did not like math back then.”

But after winning a few math competitions she started warming up to it. Her home life and love for math intersected in a benevolent way.

Guan is the eldest of two children who cooks, cleans and helps run the house.

“I’m a working mom with two kids. So, we actually receive a lot of help from our community, from neighbors, from our friends---even people we don’t know,” Yu Zhang said.

Zhang watched that spirit of giving spring forward in her daughter. Guan was inspired to use her math gift to help others. She started San Antonio Math Include. It’s a free tutoring service that started with a few classrooms after school.

“I just wanted to help students who want to learn math and want to get better at math,” Guan said.

The 13-year-old is an international math champion who boasts a 1520 SAT. That’s good enough to get into an Ivy League college.

“The cool thing about math is that math is like a universal language,” Guan said. “Like you can basically communicate with everyone through math.”

But speaking the language of math well is what matters. Guan’s mother used to drive her to Austin to enhance her math capabilities. She knew from experience everyone didn’t have the means to get the same level of attention.

“There are communities in San Antonio that don’t get the same access to the resources that I can get,” she said. “They can’t go to fancy summer camps and they can’t get their prep books and stuff.”

Guan said when she’s not being CEO Math Include she playing with her brother, reading or watching Netflix.

Yes, there are some math problems too complicated for her. To solve them, she Googles.

Guan says her goal is to one day become a math teacher.