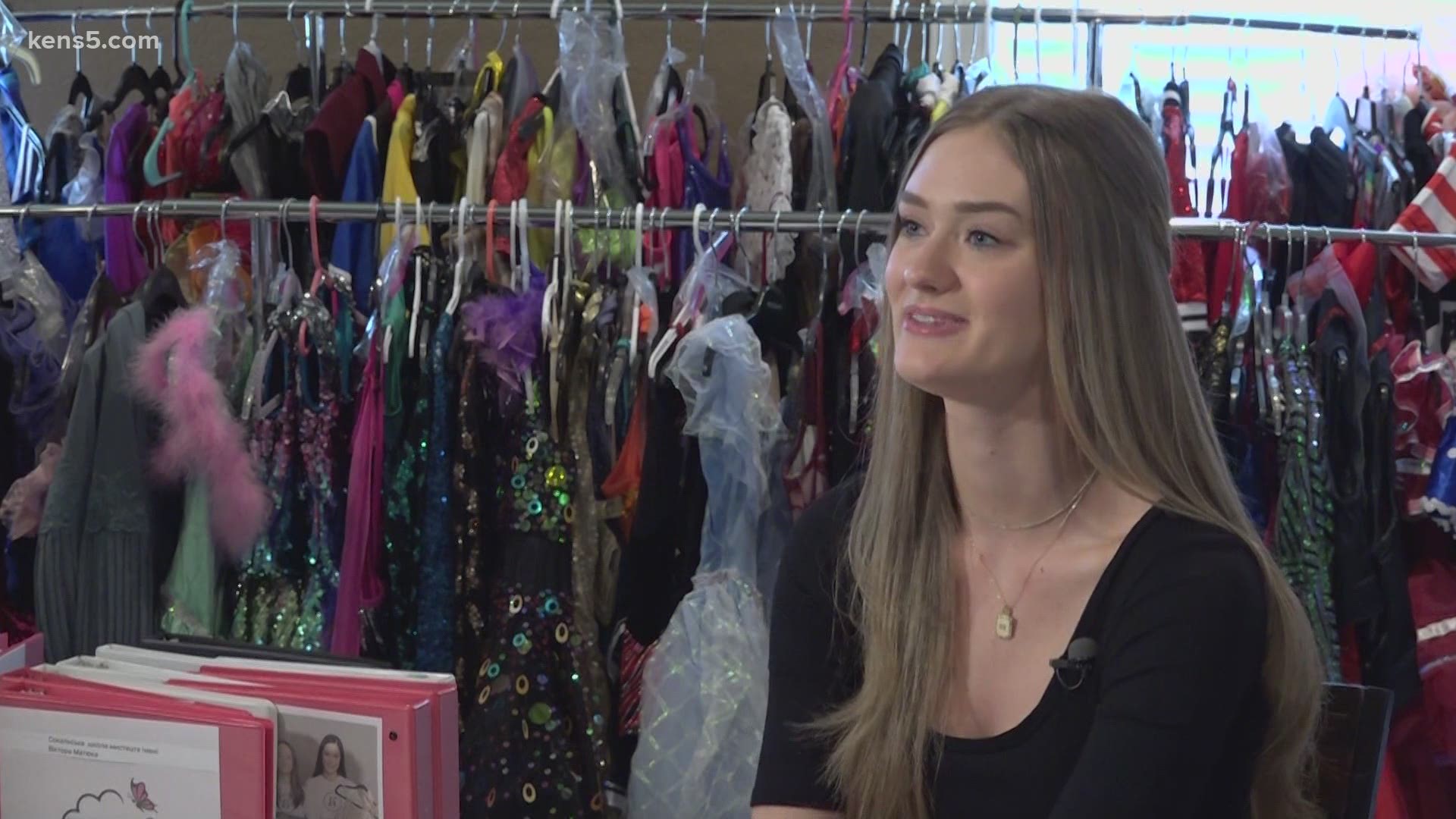 BOERNE, Texas — A closet stuffed with dance costumes changed Michelle Koehler from a dancer to a fairy godmother. The teen has a simple philosophy that carries her through.

"The clothes don't make the dancer, but it really does help to give confidence and happiness," Koehler said.

The 17-year-old dances with Earle Cobb Dance Studio. In the past 13 years, she amassed a collection of dance attire from her performances.

"There are some costumes that are so memorable that you have to keep like a solo costume or do a costume," she said.

Even so, the teen decided three years ago she wanted to donate the dance attire differently. So, she started 'Dance Fairies' with two friends from her dance community and some business navigation from her mother and grandmother.

"I kind of thought it'd be nice if I could give them (the costumes) like another chance to dance," Koehler said. "Give them to someone who can really use them."

Dance Fairies collects gently used dance costumes, tights, accessories, and shoes for children who can not afford them.

Koehler's family has Ukrainian lineage. So, they gathered goods for children in Ukraine first – hearing stories of what the children lacked.

Twenty ambassadors in Texas, Louisiana and Virginia help her pull Dance Fairies off – everything from fundraising to shipping. Koehler said she came up with the name to create magic in the lives of those who may need a touch of abracadabra.

"Growing up, I always envisioned the fairies as hard-working magical creatures that are helping those in need," she said.

Marissa Garza is an ambassador/fairy who said dance is a place where people can escape everything.

"You feel just like you're in a ball gown," Garza said. "You feel untouchable. Nobody can stop you."

A longtime friend of Koehler, she is there for the process of taking dance attire into the 'Fairy closet.' Then, everything is sorted, cleaned, photographed, cataloged, and shipped out.

"I am so happy for her (Michelle) that she started this and how far it's gone,"  Garza said. "And I can't wait to see where it goes next."

To date, Dance Fairies has given away more than 4,400 costumes. The non-profit took in their goal of 2,020 costumes last year during the pandemic. The organization is on track to take in 4,000 this year.

"Wow, it blew me away," Dena Mabry said.

Mabry is Koehler's dance coach. They've worked with each other for 13 years. She said the Dance Fairies' inspiration is spreading among her other students.

"They see her and see what she's doing, and they want to do something like that for the community as well," Mabry said.

Thirteen boxes are waiting to get shipped out. The dance attire charity's reach could help in places like Africa. Koehler said dancers from two schools sent heartbreaking images.

"We see pictures that they sent to us, and they're dancing like on concrete with no shoes like I want to send like ballet shoes to them or something," she said.

The teen said shipping costs to Nigeria are around $500. That's more than they can spare right now.

Dance Fairies got help domestically from partner GiveBackBox. The partnership allows them to send 70 pounds for $15 in the United States.

She said they've even donated to the Hill Country Youth Ranch in Ingram, where children who have endured trauma and neglect get past their former lives.

"They were so happy and so excited, and just seeing their faces made it all worth it," she said.

The beneficiaries of Koehler's fairy goodness frequently send thank you pictures and videos in their costumes.

"It just makes them feel happy, especially when I see one of my costumes that they're dancing in," she said.