The city of Nixon honors Symphony Alexander for saving her younger sisters from their burning home last month. 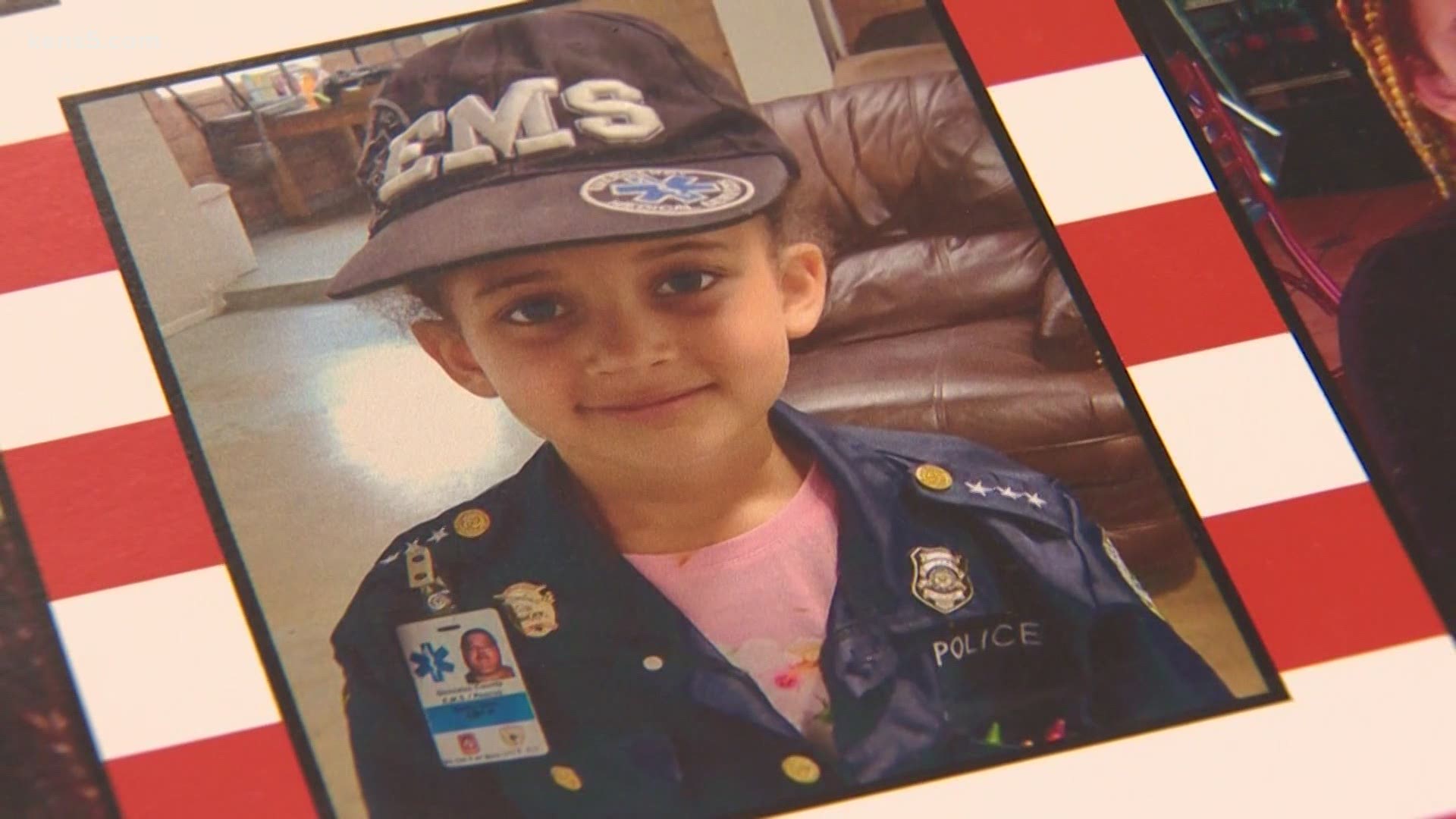 NIXON, Texas — Symphony Alexander didn't have to say much about a fire that destroyed her home in Nixon on June 17. Everyone else is doing the talking for her.

"I opened my door, and she said 'fire' because my wall was on fire," Kristan Baker said.

Baker is mother to Symphony, Clarity and Harmony – ages six, three and two.

Around 10:30 that June night, she was getting ready to put the girls to bed. Symphony jumped into action because the house was on fire.

"Her instinct was to grab her sisters, Clarity and Harmony, and get them out of the house," Baker said.

The girls got outside of the burning home. Their mother tried putting out the electrical fire by patting it. The flames grew out of control.

"The fire started in my mom's room... under the A/C," Symphony said.

One of her sisters tried running back into the house. Symphony was able to grab the girl until their mother came out. The 27-year-old single mother moved her kids away from the home as the fire climbed skyward.

"You could see it over the building. See over houses," Jason Torres said.

Torres is the assistant fire chief with the Nixon Volunteer Fire Department. He responded to the fire that night.

All they could do is keep the fire from spreading to nearby homes. Symphony's grandfather is a member of the department. Her grandmother is an emergency responder too. She rushed to the scene.

"I just told her it could have been a lot worse if she wouldn't have done what she did," Lisa Baker said.

According to Lisa, she was relieved to know her daughter and granddaughters were not injured.

"I know for a fact it could have had bad results," Lisa said.

Baker and her daughters lost nearly everything they owned that night. The young mother, enrolled in an online college course, lost her laptop in the fire: beds, clothing, toys, everything reduced to charred remains and ashes.

They did gain a sense of pride because suddenly, Symphony became a hero.

"I was so emotional I didn't know what to think," Baker said. "But after the whole event, I was very proud of her."

She wasn't the only one. Nixon Mayor Dorothy Riojas worked with public safety officials to honor Symphony for her quick actions.

"We saved a family. And it's basically for the efforts that she did," Torres said.

Torres teaches fire safety at local schools each year. He doesn't remember Symphony in his class. But her mother said it's that class and lessons from the girl's grandfather that made the difference that night.

"I know my daughter did the right thing for her age," Baker said. "She did a fantastic job."

On July 14, Gonzales County and Nixon officials rolled out a public safety parade for Symphony. With fire engines blaring, she rode in the front seat of a fire engine through the city.

Some of the same vehicles responded to her home. The procession even brushed by the street where she used to live.

Riojas rewarded the 6-year-old girl with a necklace and a commendation for her bravery. Gonzales County officials presented the young hero with an emergency responder's cross complete with wings and holster.

Symphony wants to become a police officer or a doctor. She wore a specially made police shirt for the parade with an emergency responder's badge.

"She'll be our little junior firefighter for a long time," Torres said.

Instead of being frozen in fear, the Nixon girl became a lifesaver. Her mother said Symphony isn't afraid to remind her sister they owe her their lives.

"Her sister asked her for some juice, and she told her – 'Well, you didn't save your sister from the fire, did you?'" Baker said. "She flipped her hair and walked off."

Symphony and her family are trying to find a new place to live. They started a GoFundMe for help.