Heroes find a path to peace with a horse and saddle

As marchers for the Dallas-based group Carry the Load gathered at Reverchon Park this Memorial Day weekend, they also came to pledge their support to the living: soldiers who survived, but are still fighting their own battles here at home. And some are finding peace in the battle in a truly Texas way - with a horse and a saddle. 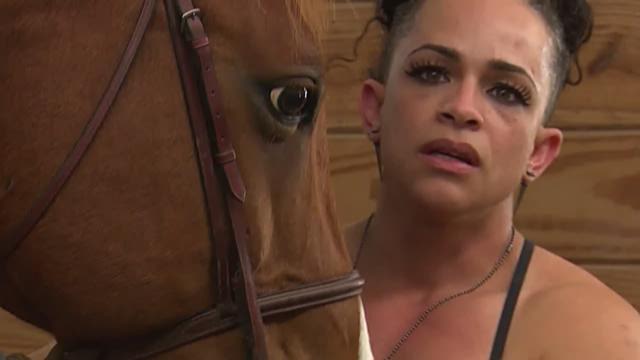 As marchers for the Dallas-based group Carry the Load gathered at Reverchon Park this Memorial Day weekend, they also came to pledge their support to the living: soldiers who survived, but are still fighting their own battles here at home. And some are finding peace in the battle in a truly Texas way - with a horse and a saddle.

"I had never been around horses so I really didn't know what to expect. I used to be kind of scared of them,” said veteran Lucy Caba. But what scared her even more, more than the memories of her military life as an Army Blackhawk crew chief, were the memories of an abusive marriage and the emotional damage that came with it.

She found and answer and help, in a horse named Hickory at the Texas Horse Park southeast of downtown Dallas where the therapy offered at a non-profit called Equest includes a program called Hooves for Heroes.

"It just brings like an inner peace and calm, that I didn't have before,” Caba said. “The first time I felt like the horse felt what I was going through. Like taking a really deep breath and letting it out. And I did have to hold back the tears.”

"The truth is most everybody going through transition into civilian life, you know, has something,” said Jeff Hensley, a retired Navy fighter pilot and now the Director of Clinical and Veteran Services at Equest where therapeutic horsemanship has helped scores of veterans with a variety of physical and emotional issues.

He found that fit on a horse. Now he’s a licensed counselor running the veteran program.

"And so I needed a program like this, something like this to help me figure that out,” Hensley said.

Mike Gregory has figured it out here too. He's a peacetime veteran. But he has health problems that affect his back, and neck, and his posture.

"It relieves me of the pain temporarily,” he said.

On the day we visited the Equest stables, a horse named Tez helped him forget about that pain, at least for a little while.

"And it's been a great blessing in my life, Equest and the Hooves for Heroes program,” Gregory said.

And on the day I met these veterans, Lucy Caba was wearing a dog tag, bearing the face and name of a fellow veteran. The image was of her friend Sgt. Benjamin Adams, a veteran who struggled with his demons after returning home to civilian life. And despite being active in veteran-assistance groups, Adams took his own life earlier this month.

"Losing a friend like that, I wasn't ready for it,” Caba said.

The day after Adams’ death, Caba sought help at Equest. And in the middle of the arena, a horse named Rita stood silently by her side - for 45 minutes.

“She just gently leaned up against me. She just waited there like she was protecting me. It was like she knew. Having this, being able to come the next day, and at least having some kind of therapy and some kind of peace, helped me get through the week,” Caba said.

"We help to give them a little bit of support through a difficult phase of life transition,” said Hensley. That's got benefits for all the relationships in our lives. And that's what we're trying to do."

All that, from a few hours on a horse. Veterans finding a moment of peace, and maybe a better path knowing it's a journey they don't have to take alone.