Hateful messages were spray-painted on the windows and outdoor tables of the ramen restaurant. 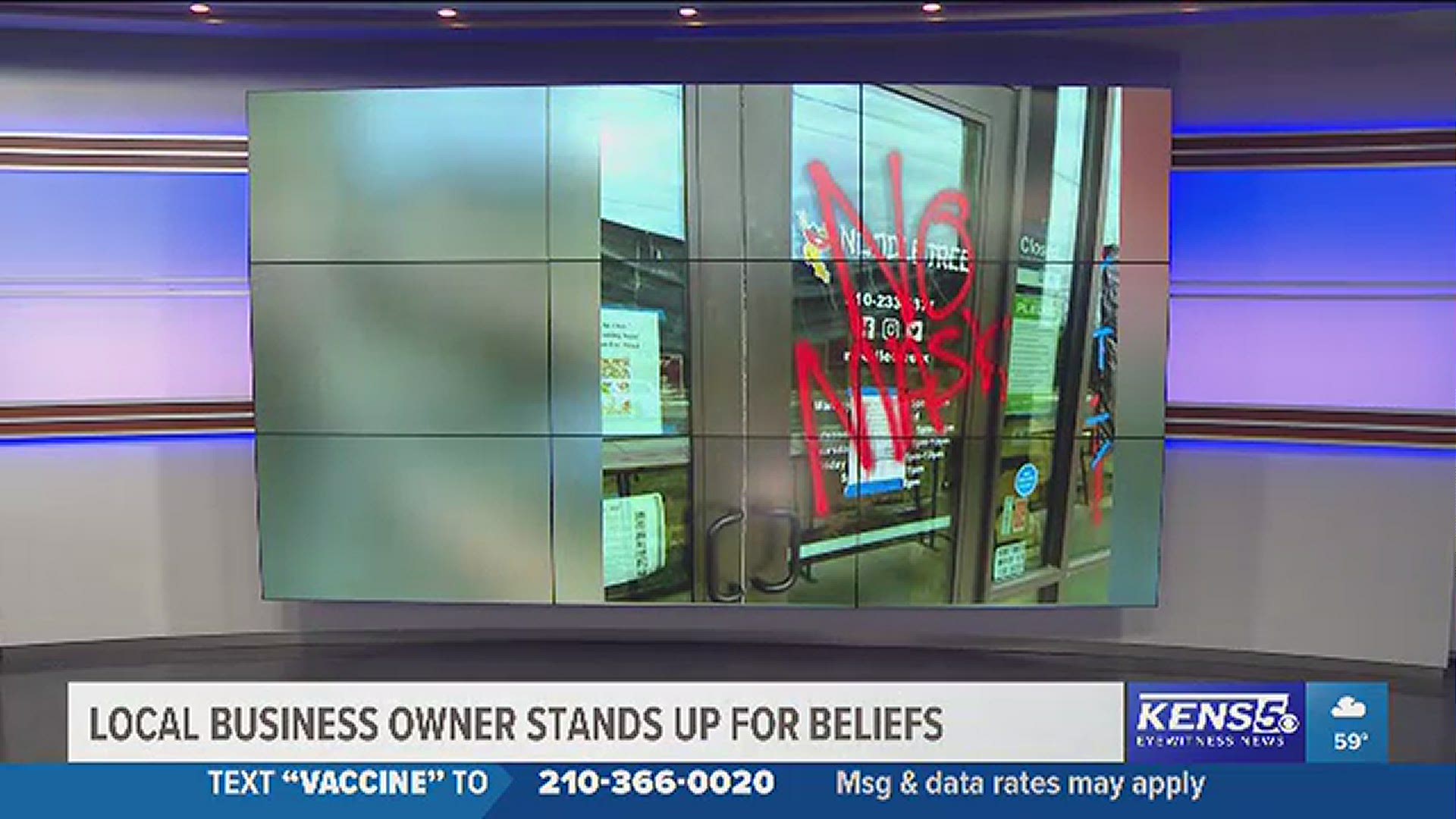 SAN ANTONIO — The Noodle Tree restaurant opened later than usual Sunday afternoon after vandals spray-painted racist and anti-mask messages on the windows and tables outside the UTSA-area business.

By Sunday afternoon, messages including “Go back 2 China” and “No masks” were in the process of being washed away with the help of friends of the business owner, Mike Nguyen, and strangers alike. Nguyen told KENS 5 the vitriol is something he’s had to deal with his whole life.

"The funny thing is, I’m not even Chinese, I’m half Vietnamese, half French,” Nguyen said outside his restaurant Sunday.

The vandalism came after Texas Gov. Greg Abbott rescinded the statewide mask mandate that had been in place for nearly a year. Nguyen, an outspoken critic of Abbott, said the vandalism will not deter him from enforcing a mask policy at his business.

During an interview with CNN earlier this week, Nguyen expressed his opinions about the lifting of state coronavirus restrictions.

He said his stance from the outset of the pandemic has been the safety of his staff, himself, and the community over profits.

The pandemic has affected Nguyen personally. In addition to battling lymphoma while running a popular restaurant, Nguyen said he lost a loved one to coronavirus. He said the stakes are far too high to not request his patrons wear a mask if they eat indoors.

Nguyen believes his convictions on the rescinding of the mask mandate and his outspokenness on the governor’s handling of the pandemic may have sparked the vandalism.

"Regardless of what your beliefs are, it shouldn’t have to get to that point where you wish death upon somebody,” Nguyen said. "That’s what kind of enraged me was, you don’t even know who I am. All I’m trying to do is the right thing.”

The community swiftly rallied around Nguyen and his business. On social media, many wrote messages of encouragement. One person wrote, “please know these bigots are outnumbered!” Others expressed sadness and anger that someone would vandalize the business.

Andrea Dierkhising said her husband got a text from Nguyen asking how to remove the paint, but soon, others began showing up asking how they could help.

“Some of these people aren’t even friends of his. They just saw it on social media and was like, 'I need to go help,'" Dierkising said.

Strangers and friends washed away the hate-filled messages in support of Nguyen, who stressed he will not back down from what he believes.

“I think that’s what kind of motivates me to keep fighting and going, because people are rooting for us to succeed and they are there for me, so I just can’t flop down and give up," Nguyen said.

The presidents of the Chinese American Citizens Alliance and Asian American Alliance of San Antonio offered a joint statement following the incident:

“The San Antonio Asian American community stand in unity with our fellow Asian American and support their right and freedom to express their lawful opinions without fear of retribution.

This ugly display of hate and ignorance that was perpetrated on the Noodle Tree Restaurant has no place in San Antonio where the diversity of our community is embraced by our residents. We ask that all San Antonians support a fellow American’s right to free speech.

We call for the San Antonio Police Department and the Bexar County Sheriff’s Department investigate this hate crime and bring the criminal(s) to face justice. This ignorant act had not only damaged a business, but it also dishonored the distinguished reputation of San Antonio.”

At the onset of the pandemic, Mayor Ron Nirenberg and the rest of city council unanimously passed a resolution condemning COVID-19 hate speech. Some of the jargon in the resolution was tagged on Nguyen’s business. Nirenberg in May explained that the resolution was necessary as the country saw a rise in hate crimes against Asians and Jews.

Nirenberg issued a statement Monday, saying hate has "no place" in the city.

"We cannot turn our backs on the hate speech that was displayed yesterday by the disgusting graffiti painted at the Noodle Tree restaurant. I applaud the customers and neighbors who demonstrated the compassion of our community by immediately stepping in to help the restaurant. If you have any information about this crime please contact the San Antonio Police Department. We must work together to eradicate racism in our city whenever it rears its head.”

Over the weekend, a District 8 restaurant was the target of a hateful attack by small-minded bigots.@Noodletreetx, a small, minority-owned business admired & appreciated by many, was defaced by anti-Asian racist graffiti. I can’t think of a less Texan thing to do to a neighbor.

Mayoral candidate Greg Brockhouse posted to Facebook on Sunday saying he had dropped off money to the business to fund meals. He encouraged people to give the business service to let the vandals and Nguyen know that the hateful messages were not the spirit of the city.

“I think that’s what kind of motivates me to keep fighting and going,” Nguyen said of the outpouring of support from strangers and friends. “Because people are rooting for us to succeed and they are there for me, so I just can’t flop down and give up."

The San Antonio Police Department has not issued a report on the incident. KENS 5 has requested this information.

RELATED: How did we get here? A look back at a year of COVID-19 in San Antonio