Dozens of veterans and volunteers made Easter baskets for the children of Wounded Warriors on Saturday. 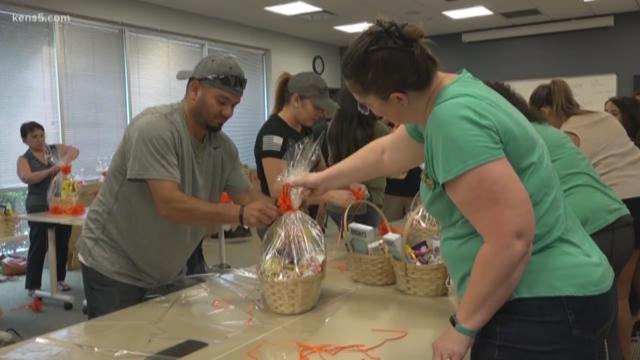 William Watson is an Army veteran who survived an explosion after his vehicle ran over an IED in Iraq in October 2004.

"It killed everybody in the vehicle except for me," he said.

Watson was transferred to Brooke Army Medical Center in San Antonio, where he recovered after his leg was amputated. He says that the Wounded Warrior Project helped him get back on his feet.

"Really, they just helped me get back on track talking with other peers, just helping me out,” Watson said. “Anything that I needed, they were there for me.”

On Saturday, Watson and other Wounded Warrior alumni and volunteers from USAA got together to make 200 Easter baskets for other injured veterans in Military City USA.

"This is just one of the ways to relieve that stress for those families of having to go out and buy a basket," said Rene Maldonado, an Army veteran, volunteer, and alumnus with the Wounded Warrior Project.

Watson says that, for him, it's a chance to continue his service.

"They're not alone. We're here to help if you're going through any type of situation,” Watson said. “Come and just talk. Sometimes talking helps you get through your situation.”