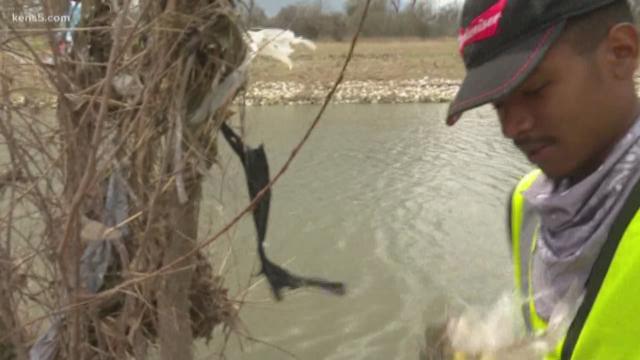 Just days after the biggest volunteer trash collection effort of the year, the San Antonio River is a big mess again.

Thousands of people showed up for Basura Bash on February 17th.

They hauled away tons of trash and floatable debris from the river and most of its major tributaries, but then the rains came six days later.

Tommy Mitchell, with the San Antonio River Authority, said because there was a relatively small amount of rain, the river is trashed.

“Normally, with a small amount of rain, like about an inch, we'll see what we call the first flush. That cleans out the storm drains and if it hasn't rained in a while, what we will see is that it brings a lot of litter.”

Mitchell said the garbage ends up in south San Antonio on the Mission Reach of the river not because that side of town is trashier, but because litter from all parts of town flows downstream.

“Our watershed is very large up north of us here and it comes from all over the city of San Antonio, including the northern reaches and all the surrounding areas,” Mitchell said.

Mitchell added that the plastic bottles and bags and snack wrappers are not industrial waste, they are the product of individuals being careless with their trash.

“A lot of what we see here is what you see in parking lots, shopping malls, along the street sides, the curbs, that unfortunately are being dropped and unfortunately it hits our streams and this is where it ends up. This is a lot of general household waste and trash,” Mitchell said.

Because the Mission Reach project is an eight-mile area where the community has invested $271 million dollars in restoration of the natural ecosystem, Mitchell said it’s important to protect that investment.

“Folks throughout Bexar County come out here to enjoy this and the trash impacts not only the enjoyment and recreational function, but the ecosystem, the fish, the wildlife, the habitat that we work so hard on,” Mitchell said.

Mitchell said the garbage is a big threat to the 400 acres of restored habitat, 20,000 young trees and shrubs and 60 species of grasses and wildflowers that have been planted.

Kristen Hansen, with SARA, said many cleanups are accomplished with staff members, but the size of this effort required the help of a contractor. "This effort is going to cost us about $40,000 dollars," Hansen said.

Hansen said the budget for litter removal is about $100,000 per year.

“Every time it rains, we assess how much litter is there. Sometimes we are able to handle it with staff, but a lot of times it requires contracted help and with this effort that's going on right now, we're probably going to reach that budget pretty easily,” Hansen said.

Mitchell said every time there is a rain event, their goal is to get the litter removed within 14 days. With regard to this incident, he said the rush is on to get the area near Confluence Park cleaned up faster because thousands of guests are expected on Saturday for a grand opening celebration for the venue.