"If they're going to make statements that what happened in Minnesota was swift justice, then we need this to happen right here in Dallas," said Daryl Washington. 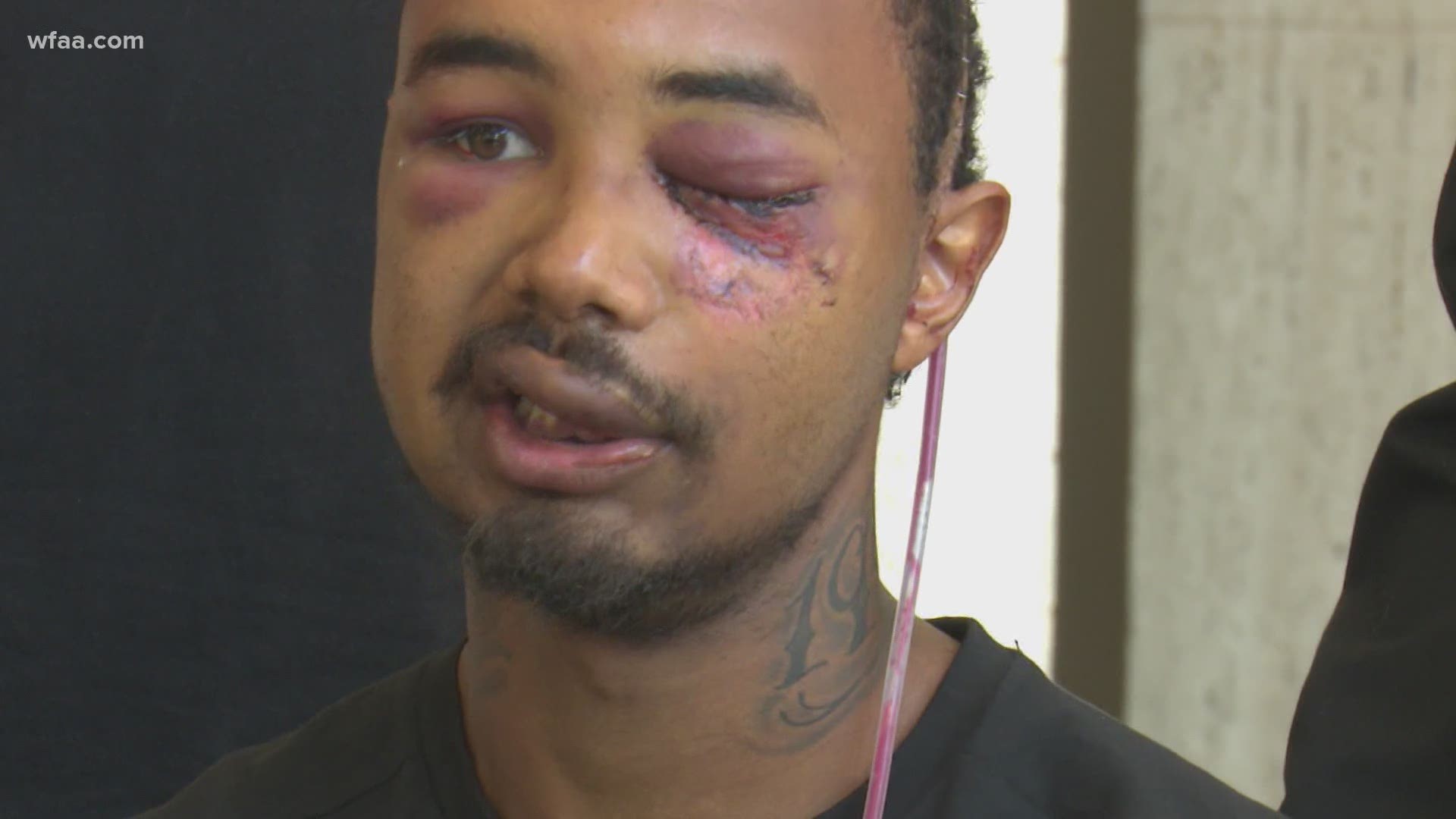 DALLAS — On the day he was released from the hospital, his 26th birthday, Brandon Saenz agreed to talk with us and then with Dallas police detectives trying to determine who shot him in the face and blinded him during downtown protests Saturday afternoon.

"I was by myself," he said. He was walking from a nearby dog park to look for a friend near the downtown Dallas Library. That's where he said he approached a line of police officers near Dallas City Hall. It was early in the afternoon when he says he approached within about 10 to 15 feet.

Protesters nearby rushed to help, trying to stop the extensive bleeding. But by the time an ambulance could get to the scene — witnesses say it was about 15 minutes — his eye could not be saved.

RELATED: 'It's a parent's nightmare': Protester lost eye after officer fired at him, witnesses say

In a series of surgeries, doctors removed the remaining pieces of his left eye, opened his scalp with an incision ear to ear to remove blood clots and installed a temporary drain tube to help guard against any additional clotting issues.

"Thank God he's alive," said Saenz's father Andre Ray. "But nobody's come forward to say, 'Hey, look, let's hold this officer accountable.' My son is never going to be the way he was. And I want somebody to answer for it."

Attorneys for the family say they are still trying to determine exactly what type of projectile hit Saenz in the face. Officers in photos provided to Saenz's attorneys by witnesses at the scene that day are holding yellow rifles that fire a 40 mm "sponge round" meant to repel someone, but not maim them.

"We know there were a number of different forces that were out there but the witnesses have identified it was individuals with the Dallas Police Department," said attorney Daryl Washington.

"But right now we need to know who the officer is," added attorney Jasmine Crockett. "We need the help of the community. We need someone to speak out."

"That cop in the line, he knows who he is," Saenz said. "He just don't want to come out and say it."

When we first told you about the incident earlier this week, Dallas police responded saying they were investigating at least two use-of-force incidents during the Saturday downtown protests and that detectives were canvassing specific areas downtown to see if they could find any additional surveillance video to help determine what happened.

"We take these matters very seriously," the Dallas Police Department said in a written statement. "Rest assured, there will be a full investigation and we will continue to keep the public informed on the status of the investigations."

As our interview Wednesday drew to a close in the lobby of Washington's law office in downtown Dallas, many of its windows still boarded up from the weekend protests, two Dallas police detectives arrived to interview Saenz.

"If they're going to make these statements that what happened in Minnesota was swift justice, then we need this to happen right here in Dallas," Washington said.

"I just want my justice, that's all," said Saenz.

If you have any information, photos or video regarding these incidents, please contact the Dallas Police Department's Internal Affairs Division at 214-671-3986 or send an email to: DPDIAD@dallascityhall.com.