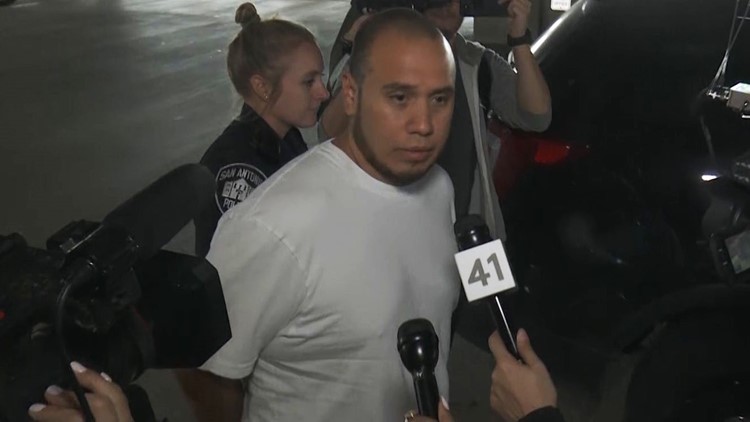 Man accused of forcing wife into sex with others, police say

Jose A. Sanchez Davila, 39, is accused of trafficking his then-wife for several years. San Antonio Police Chief William McManus said Davila's ex-wife came forward to police in August and that police had been building their case in the months leading up to Davila's arrest.

"It took this long to be able to find someone who would corroborate the human trafficking charges," McManus said. Immediately after Davila's ex-wife made the outcry, McManus said few were willing to cooperate with the department's investigation.

McManus described the abuse as "unimaginable."

"He would transport her from place to place, forcing her into sex acts, putting her on a website and advertising her for a price for prostitution," McManus said.

McManus said police are tracking down the individuals with whom Davila's ex-wife was forced to have sex with and that they will face charges for their role in the crime.

"The thing that makes this so difficult for victims who are being trafficked, specifically, in this case, the husband threatened her in a variety of ways, which made her fearful — fearful enough not to even leave that situation," McManus said. "So, (it's) very difficult sometimes for victims to leave the situation that they're in that may otherwise seem to someone who doesn't realize, like 'why didn't they just leave?' because a lot of the time it's not that easy."

An arrest affidavit states Davila forced his then-wife into having sex with other men on at least three occasions and that the men paid $20 once and $60 another time.

The warrant states that Davila posted an ad on a website stating that his wife was looking to have sex with an African American man. Police interviewed the man who responded to the ad and court documents state the man told police met the pair and had sex with Davila's wife. The man who responded to the ad told police he paid Davila $20 for gas money, the warrant states.

Police said they have since divorced but that Davila continues to harass her by constantly contacting her by phone despite changing her number. The warrant states that Davila also shows up to their kids' school, "as if he had been following her."

Police records show that police were previously called to Davila's home in October 2017 after Davila's wife reported that he had assaulted her. The report states that in that incident, Davila's wife told authorities Davila was upset that she and their children had woken him up.

According to the report, Davila's wife told responding officers they had discussed getting a divorce and that he wrote out a list of items that were in his name. She told police that he said she would need to get certain things under her own name, including car insurance and a cell phone plan, according to the report.

The report states that as she went to take a picture of the list, Davila grabbed her arm and took her cell phone away from her.

Davila's wife got her phone back and called police when Davila left for work, the report states.

Police in 2017 stated that they advised Davila's wife to have an exit plan and leave if she felt she was in danger. The report states she told police all of her family lived in Washington.

If you or someone you know is in an abusive situation, they can find help through Family Violence Prevention Services. If an individual is in immediate danger, call 911.