San Antonio City Attorney Andy Segovia said the latest filing is “a desperate attempt to distort facts and divert attention" from the Attorney General’s own woes. 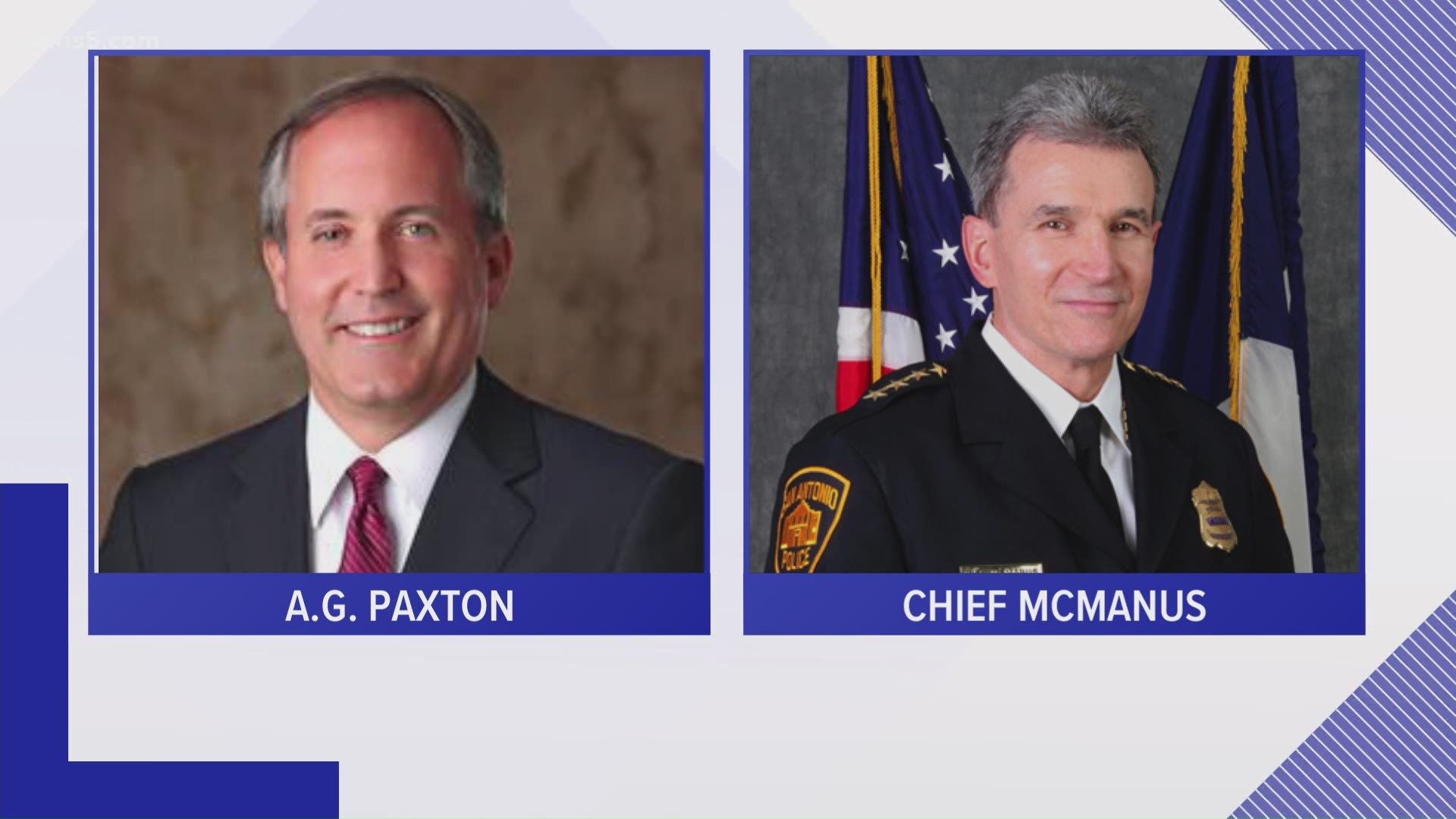 The state argues that because McManus allegedly violated the provisions of Senate Bill 4 in 2017, he effectively forfeited his office. The filing states they are calling for McManus’ removal "because state law demands it.”

Paxton’s ask stems from the San Antonio Police Department’s response to an alleged human smuggling operation that occurred December 23, 2017, when a dozen individuals suspected of entering the country illegally were discovered in a tractor-trailer. San Antonio police opted to handle the case under a state smuggling statute. Authorities connected the immigrants with Catholic Charities and RAICES, immigrant advocacy groups, one of which sent an immigration attorney.

“This call was situational, based on a fairly fluid situation on the scene,” McManus said in a Jan. 4, 2018 press conference about the incident. “This is not necessarily the way every case is going to be handled going forward."

Nearly a year after the incident, Paxton filed suit in Travis County alleging McManus had violated the provisions of the state’s so-called “sanctuary cities” law, otherwise known as Senate Bill 4, which demands that local agencies assist or cooperate with federal immigration officers. The 2018 lawsuit alleged McManus prevented agents with Homeland Security Investigations from speaking with or processing the individuals found in the trailer, thereby violating Senate Bill 4. Attorneys for the city pushed back, denying any violations of the provision of the law, and have been embattled in litigation since.

The 2018 suit and the latest filing state that the Attorney General may seek penalties ranging from $1,000 to $1,500 for the first violation of Senate Bill 4, and $25,500 for each day the Attorney General deems the city to be out of compliance. From the date of the alleged violation to the present, Paxton could seek to collect more than $29 million from the City of San Antonio.

Since the filing of the Travis County suit, the city has, in turn, sued the federal government to compel testimony from federal authorities. The latest lawsuit seeking McManus’ removal from office marks the third such lawsuit related to the incident.

City Attorney Andy Segovia said Friday the filing is an effort by Paxton’s office to distract from his own criminal and political woes. Paxton is under investigation amid allegations he violated the law to benefit big donors, the Associated Press reported two months before the filing of the latest suit.

“This companion action to the AG’s SB4 lawsuit was filed more than one month ago,” Segovia said. "This is a thinly veiled attempt by Attorney General Paxton to control who the City of San Antonio chooses to have as Chief of Police and a desperate attempt to distort facts and divert attention from the problems with his own beleaguered office.

"This frivolous lawsuit tries to manufacture a controversy to make up for the fact that the SB4 case is not going well for them. Consistent with sound litigation practice we have retained separate counsel for Chief McManus. Mr. Paxton’s legal actions have lost any credibility with the public and the court system. This further action will continue to unnecessarily drain City resources on political stunts.”

The latest filing states officers initially complied with federal authorities until McManus directed officers to do otherwise at the request of Nirenberg. According to the suit, then-City Manager Sheryl Sculley sent a text message that read, “I told Bill (McManus) that the Mayor does not want ICE called…” The filing notes that Nirenberg told his staffers McManus was under the direction “that no one should be remanded to DHS.”

The lawsuit states officers took issue with McManus’ decision to handle the case on the state level, with one officer heard on body worn camera video stating, “We’re the f—king police,” while another said “no we’re not, we’re amnesty international.” The filing also mentions that another said: “(McManus) can’t do that.”

San Antonio Police Officer’s Association president Mike Helle called for McManus to be placed on leave following Paxton’s 2018 lawsuit alleging McManus put people in danger and violated the law. McManus has continued to serve as the chief of police without incident and a new SAPOA president has been elected.

Paxton is under felony indictment and reportedly the subject of an unrelated FBI investigation after several people in his office accused him of crimes such as bribery and abuse of office linked to his dealings with am Austin-based real estate investor.

KENS 5 reached out to San Antonio Police for a comment.

“Chief McManus has my full support and I have no intention of taking any action that limits his authority to continue to manage the San Antonio Police Department. The facts demonstrate that the Chief has not violated SB4, as alleged by Attorney General Ken Paxton.”