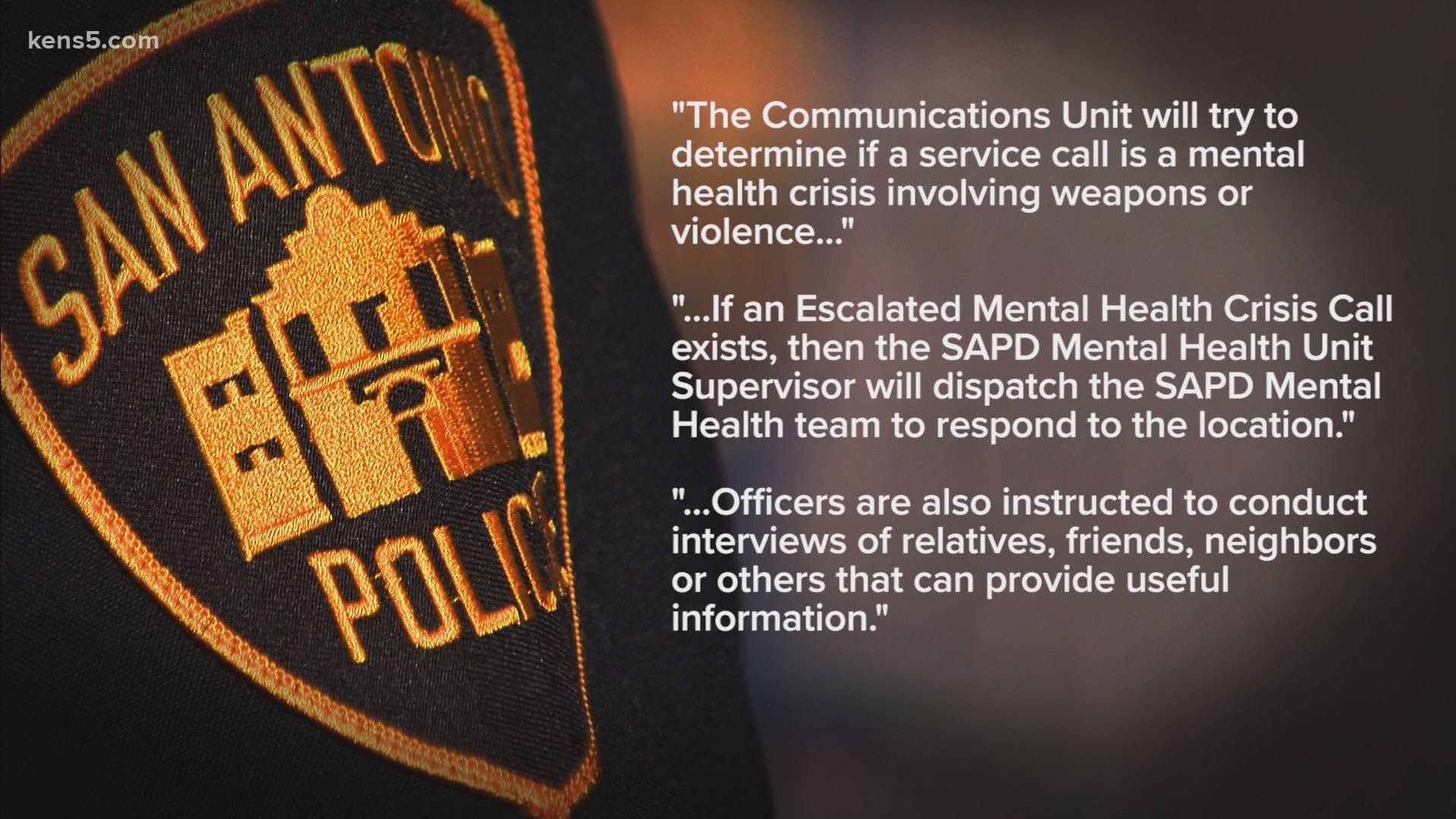 SAN ANTONIO — Police were called out to a home on the southeast side early Friday morning after a teen experiencing a mental health crisis threatened to kill his relatives, police records said.

The call, which ended peacefully, comes after the San Antonio Police Department implemented new mental health protocols when dealing with armed or violent individuals in crisis.

Police say they were called to the home just after 2:30 a.m. after receiving a report of a stabbing. A dispatcher is heard in archived dispatch audio of the incident informing officers that the teen said he had “a knife and a gun in his hand,” telling officers en route to the home, “be advised, male sounds suicidal.”

When officers arrived at the home, they found the teen with a knife standing in the front yard, police said. Officers also discovered no one had been harmed.

Throughout the call, an officer is heard telling other officers “keep him talking and have somebody with less lethal ready to go just in case.” Dispatch audio detailed how officers prepared bean bag rounds in the event the situation escalated.

Later in the call, an officer is heard telling dispatchers, “(a relative is) saying he’s in a mental health crisis at this time and that he would not hurt anybody, but obviously we’re looking at something different out here.”

San Antonio police said a member of the mental health unit was dispatched to the home, but in the meantime, officers at the scene built a rapport with the teenager. The call ended with the teen eventually going back inside his home after hours of de-escalation.

That announcement was made in the wake of the death of 30-year-old Damian Daniels, who was shot and killed by Bexar County Sheriff’s deputies responding to a mental health call at his home on August 25.

Under the protocols, responding officers may not approach the person in crisis unless it is a life-threatening situation, or the person initiates contact. In these cases, officers are also instructed to interview relatives, friends, neighbors and others for any information that could assist officers in the call. The protocol also asks that a supervisor be sent to the scene, along with a member of the mental health team.

Greg Beach, president of the San Antonio chapter of the National Alliance on Mental Illness said the amendments are a step in the right direction.

“The more information we have, again, the better the job the police can do, the safer they can stay, and the more likely the outcome is going to be a better outcome than several that we've seen lately in San Antonio where somebody has died,” Beach said.

Beach said he’s never seen the issue of mental health awareness brought to the forefront to the extent which it’s been in recent months.

“Tragedies bring a spotlight on issues like mental health and how we respond,” Beach explained. "But the other part of this that we're seeing a lot of is the pandemic has caused more stress. If you were already stressed out about life in general and then you lost your home, you're food insecure, maybe you lost your car, you can't get to work — it exacerbates people's mental health conditions. So, suicides are up. Substance abuse is up. We know those things nationally and in our community.”

Beach said NAMI said the agency is working with the city and county, along with local faith communities, to better educate the public about how to stay healthy and how to spot the signs of mental illness before it gets to the point of needing to call the police.

While he said the police department's policies are a positive step, he noted local leaders can do more to make follow up care and resources for those in crisis more accessible.

According to NAMI, 1 in 4 adults experience mental illness every year. Beach said those who are impacted should know there is hope.