The release of the videos constitute the first time footage of shootings involving SAPD officers have been released under the department's updated policy. 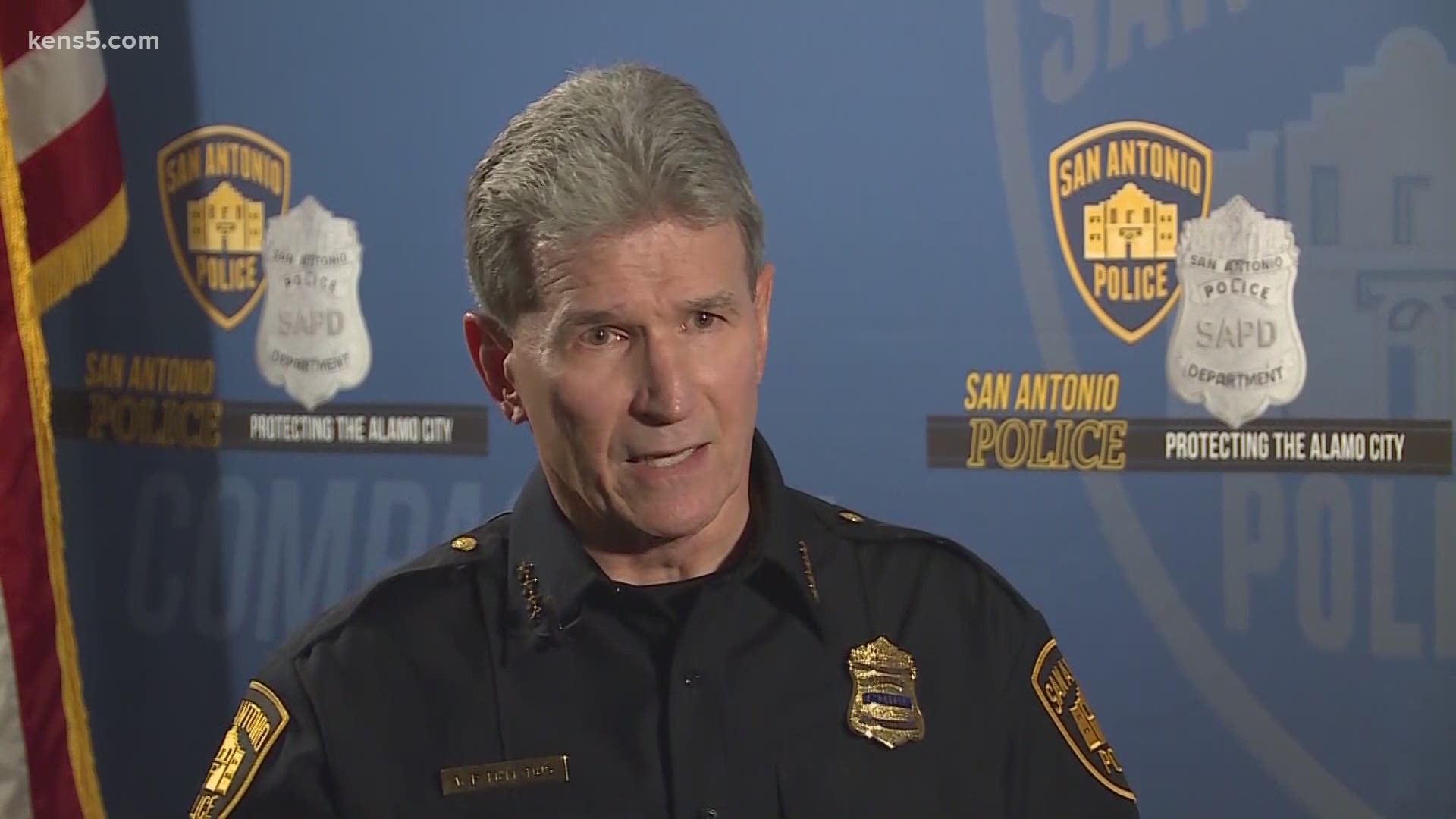 San Antonio Police on Thursday released video of two separate shootings that occurred one day apart. The first unfolded April 15 at the San Antonio International Airport, while the other began as a traffic stop on Pinn Road which devolved into violence.

In the Pinn Road incident, two people were killed and an SAPD officer was hurt.

Chief William McManus said these are the first two incidents that fell within the constraints of department policy after it was updated earlier this year. Essentially, SAPD will release a video within 60 days after an incident of gunfire involving officers, so long as McManus gives the go-ahead.

He said that, prior to their policy coming into effect, SAPD followed state law.

"These two shootings, the airport and Pinn Road, were the first two videos that fall with the parameters of the policy that require release," he said.

When it comes to the airport shooting, only surveillance video was released. Investigators said Joe Gomez started shooting after entering the lower level the wrong way with his vehicle. In the footage, bystanders can be seen running and taking cover, while vehicles sped away from the area as Gomez continued firing in all directions.

San Antonio Parks Police Officer John Maines ran to take cover behind a pillar, and can be seen shooting toward Gomez. The suspect was shot by the officer, but also shot himself.

The medical examiner said the cause of death was suicide. No one else was hurt.

"It is nothing short of a miracle," McManus said. "It was divine intervention, if you ask me."

He said the officer saved a lot of lives.

"I don't think I can reemphasize what he did and stopping that shooter," McManus said.

KENS 5 asked McManus about the officer's body camera footage. He said the only video from the incident is surveillance from the airport.

"Because that officer didn't have any intention of interacting with that driver," he said. "All he was doing is putting his hand up and telling him, 'You are going the wrong way. So there was no real need to turn the body camera on. It happened so fast."

One day after the airport shooting, an SAPD officer fired his weapon after pulling over a truck on Pinn Road. In the video, you hear the officer tell the driver to get out because he said he could smell marijuana.

However, less than a minute later, gunfire rang out. The officer can then be seen running away from the truck.

"Before you know it, in less time (than) it takes to blink your eye, he was shot," McManus said.

A bullet hit the officer's hand and radio. The officer got behind his car, and he kept shooting even though the suspects stopped.

"He returned fire until he thought he was no longer in danger," the chief said.

Two men inside the truck were killed. A third passenger, a woman, was hit but survived. She still has not been charged.

"These videos are horrible to watch," McManus said. "There is nothing enlightening about watching someone get shot and killed."

McManus said that while transparency is a motivating factor in approving the release of the videos, he also is thinking about the families of those killed in each incident.

"It is unfortunate. On one hand, there is a cry for transparency, clarity," he said. "(On) the other hand, you have the families. They don't even want to watch the videos."

The chief said the families in both of these incidents asked him not to release the footage. McManus also wanted to emphasize to the public about what they are going to see.

"What you are seeing, what the public is seeing, is the most relevant parts of a body camera video. If raw footage were released, the significant parts would be missed."

Not all videos in these types of incidents will be released, according to McManus.

"If there is a video that captures a video inside a residence, or a place where someone has a reasonable expectation of privacy by state law, we cannot show that video," he said.

He said the other instance is if it is a family violence call.  McManus said those are the two primary reasons why police wouldn't release video.

"If it serves a law enforcement purpose, and if it is the best interest of the public than we will release that video."

The two shootings are still under investigation.