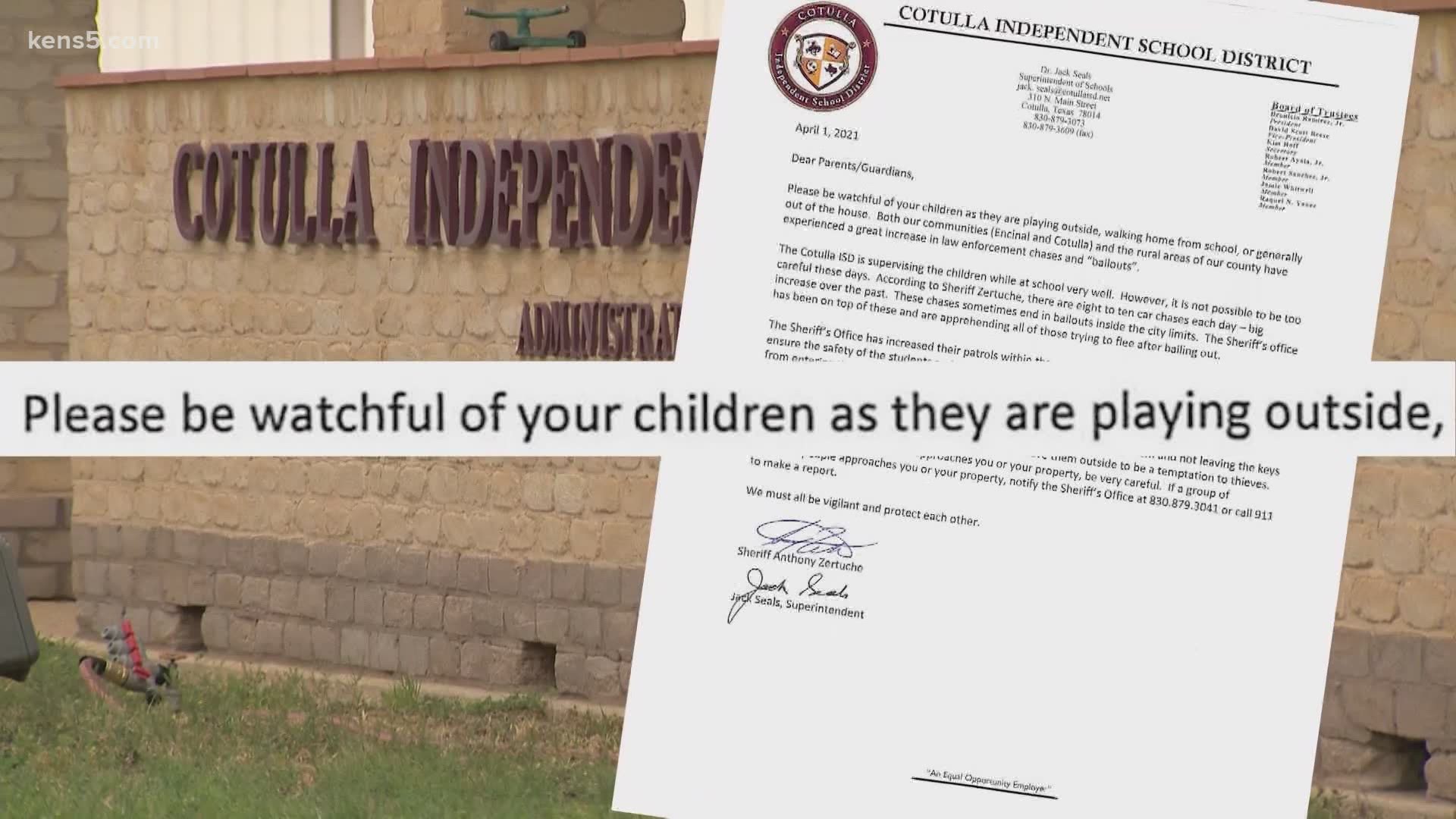 COTULLA, Texas — A high speed chase was caught on camera in Val Verde County over the weekend.

Officials said the 17-year-old driver led authorities down city streets, even through the Wal-Mart parking lot.

The alleged human smuggler was arrested and five migrants apprehended.

The uptick in human smuggling is affecting communities all along the Texas border.

Chris Meyer has lived in Cotulla for over 60 years, and said he’s never seen the smuggling this out of control.

He said his family almost got caught in a chase last week.

“There goes this F-250 going about 105 miles an hour and then there’s cops and Border Patrol all chasing him,” said Meyer.  “It’s dangerous no matter what.”

Some of the recent chases in Cotulla have been through neighborhoods just steps away from where children could be playing outside.

That’s why leaders in Cotulla ISD and the La Salle County Sheriff issued a warning last week to parents.

The letter stated there’s been a rise in smuggling and chases, at least eight to ten chases a day.

Officials advised parents to “Please be watchful of your children as they are playing outside, walking home from school, or generally out of the house.”

“Never has the school ever put out a letter like that,” said Meyer.

RELATED: Cotulla ISD warning parents to be watchful of kids as law enforcement chases have increased

Marcus Canales lives on a ranch outside of Cotulla and said he’s seen the smuggling rise in the area, and smugglers using his ranch as a getaway route, crashing through fences.

“It’s just about every day,  during broad daylight at night with the border patrol flying over the house and of the ranch,” said Canales.

“They’re there on a ranch in the middle of nowhere and you just never know what’s gonna happen,” he said.

Canales he’s concerned about the criminal element to the smuggling after they found ammunition on the property.

“My wife and daughter went for a walk on the road and found a brand new Glock magazine loaded with hollow points, and that’s never happened before,” said Canales.

Meyer said he’s questioned whether authorities should engage in a pursuit, but doesn’t want the criminals to get away because he said, they’ll just keep doing it.

“Sometimes you want to say, ‘why don’t we just stop chasing them, why not just let them go,’” said Meyer, “but they stole vehicles, they’re carrying guns.”

Meyer said he now worries about his grandkids who visit his property.

“The crime rate has gone up tremendously in town because the deputies and the Sheriff’s department and the Border Patrol and the police are all out chasing bad guys,” said Meyer.  “This isn’t amateur stuff, this is professionals.”