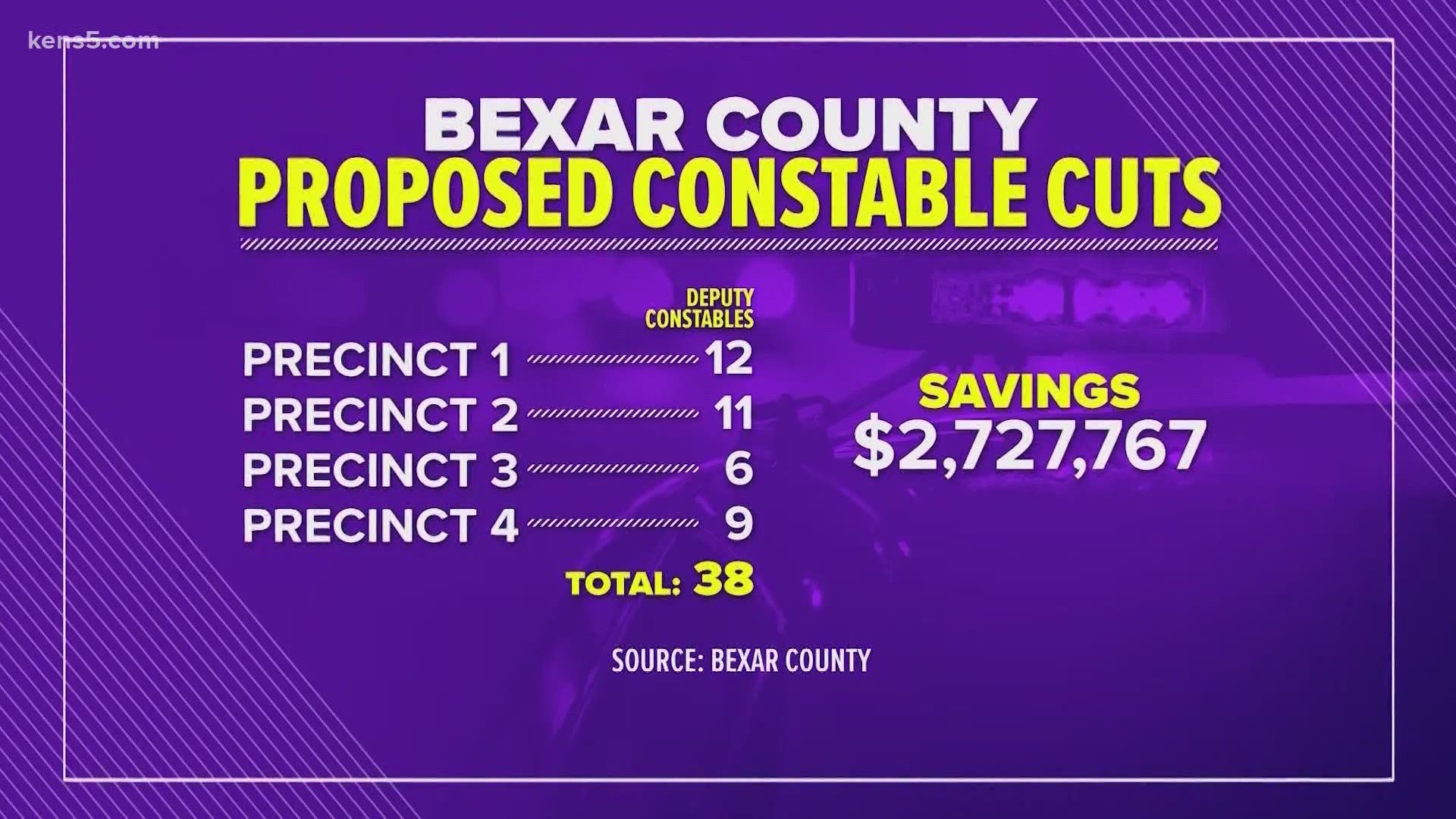 SAN ANTONIO — In an 11th-hour move, Bexar County commissioners on Tuesday voted to cut 19 positions from the offices of county constables in the upcoming fiscal year. The vote came weeks after County Manager David Smith initially proposed the elimination of 38 positions within the constables' offices.

While the move initially appeared to placate commissioners who sought to cut costs and constables who sought to mitigate the impacts of such cost cutting measures, Precinct 3 Constable Mark Vojvodich said Tuesday’s vote was anything but a win.

"I'm disappointed that commissioners court took the easy way out,” Vojvodich said. "They actually voted to cut us by 50% and when they were taking flack from the community that was not supporting them, then they come back and try to offer a rescue solution of 25%. That's just not an honest way to do business.”

Initially, the proposal was to cut 38 of the county’s 69 constables' office positions. The proposal stood until Monday, when Precinct 2 Commissioner Justin Rodriguez proposed an amendment which would reallocate $1.5 million from the county’s Debt Service tax rate to the Maintenance and Operation tax rate, ultimately generating enough funding for the 19 positions.

Precinct 4 Commissioner Tommy Calvert said Tuesday he was opposed to cutting the staffing levels of the constables' offices, calling them the most community-oriented type of police force the county has. He called into question the methodology used to tabulate numbers projecting constables’ decreased workload, which caused Smith’s office to propose the cuts.

Rodriguez recommended that the county manager's office continuously monitor the workloads at constables' offices to ensure the move wasn’t a mistake.

Precinct 3 Commissioner Kevin Wolff said the decision to cut constable positions was not a reaction from the community to defund police.

“We do not need as many resources as we have there,” Wolff said.

Vojvodich said that, despite the vote, the fight isn’t over.

“(Commissioners) can change this and change this decision in a week if they would put it on their agenda and do so,” Vojvodich said.

Vojvodich, like Calvert, said they are anticipating there will soon be a great need for more deputy constables. Vojvodich said his office alone has seen approximately 800 eviction cases backlogged, adding that the backlog continues to grow.

However, the county shows no sign of backing down.

"It's not justified,” Vojvodich said. "It's a poor way to run county government and it's a disservice to the public."