“I couldn’t be more pleased to learn that Alabama will be the new home to the United States Space Command!” Ivey said in a statement. 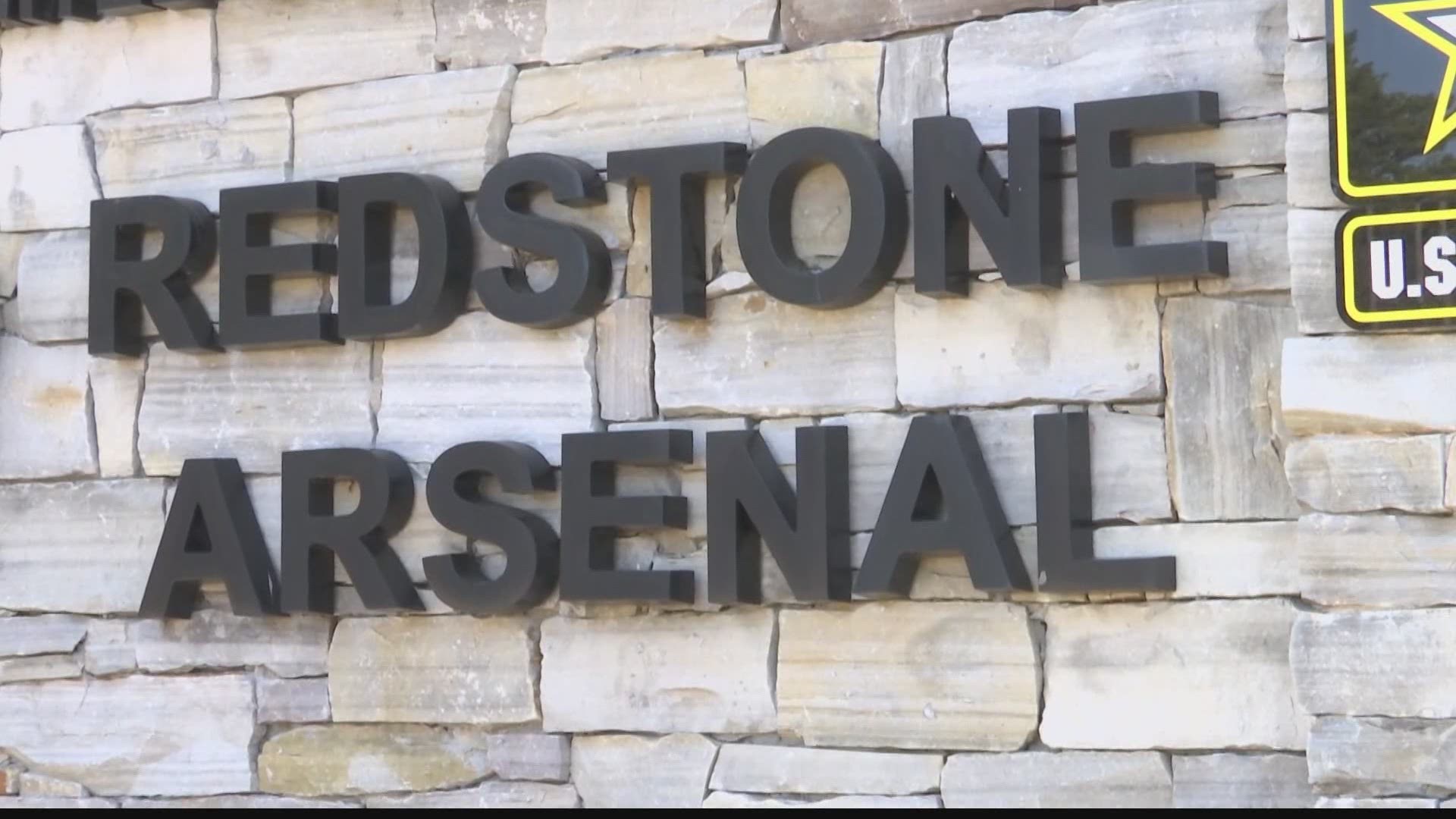 HUNTSVILLE, Ala. — The Secretary of the Air Force has chosen Huntsville's Redstone Arsenal to be the preferred location for the U.S. Space Command Headquarters.

The U.S. Air Force made the announcement on Wednesday, January 13.

“I couldn’t be more pleased to learn that Alabama will be the new home to the United States Space Command!,” Alabama Gov. Kay Ivey said in a statement. “Our state has long provided exceptional support for our military and their families as well as a rich and storied history when it comes to space exploration.”

“This combination only enhances the outstanding relationships we have with the 65 diverse federal agencies on Redstone Arsenal, not to mention the growing presence of the FBI and other federal installations. The bottom line is simple, the Redstone Region is the most natural choice to become home to such an important mission for our country,” Ivey continued.

“We are honored to welcome Space Command and our joint partners to Redstone, the Huntsville/Madison County Community, the State of Alabama and the Tennessee Valley,” said Redstone Arsenal senior ranking officer and commanding general of Army Materiel Command Gen. Ed Daly. “This is a welcome effort and we are excited to bring their more than 1,400 service members and employees to Redstone.

“Redstone Arsenal as a Federal Center of Excellence has continued to thrive and grow over the past 15 years and serve as the economic engine for the Tennessee Valley. Most recently we have seen growth on Redstone include FBI; Army Future Command’s Future Vertical Lift and Assured Positioning, Navigation and Timing Cross Functional Teams; and Army Rapid Capabilities and Critical Technologies Office for hypersonics and directed energy, a new three-star command.

“Redstone Arsenal leadership remains committed to working with local community and state leaders to invest in roads and other critical infrastructure, continued access to quality education at all levels, including school of choice for military families residing on the installation,” said Daly.

RELATED: City of Huntsville to continue work on infrastructure for U.S. Space Command

Lieutenant Governor Will Ainsworth on Wednesday released the following statement regarding the announcement of Huntsville’s selection as the headquarters of U.S. Space Command.

“Alabama-made rockets first launched Americans into space and later carried them safely to the moon. Huntsville’s selection as the headquarters for the U.S. Space Command further solidifies Alabama as the national leader in aerospace research and development. We welcome Space Command to Huntsville with open arms and a good dose of southern hospitality.”

“This decision is not only a good one for North Alabama, but also good for America.  Locating the United States Space Command in Huntsville is smart, because it’s already the center of much of our nation’s space, military and strategic command capabilities.  It’s also located near Washington; just one hour and 15 minutes by plane.  The area also has a high quality, low cost of living for those who will be stationed here as part of the Command.”

“Our space program was born, raised and came to greatness from Alabama soil.  So, it’s only fitting that the next great incarnation on our leadership in space would be firmly planted here as well.”

U.S. Senator Richard Shelby (R-Ala.), chairman of the Senate Appropriations Committee and its subcommittee on defense, today praised the Air Force’s selection of Redstone Arsenal in Huntsville as the permanent location for the U.S. Space Command headquarters, following a two-year competition for the basing decision.

“Redstone Arsenal will be the new home to U.S. Space Command.  This is outstanding news, not only for our state but also for the Air Force.  This long-awaited decision by the Air Force is a true testament to all that Alabama has to offer.  Huntsville is the right pick for a host of reasons – our skilled workforce, proximity to supporting space entities, cost-effectiveness, and quality of life, among other things.  I am thrilled that the Air Force has chosen Redstone and look forward to the vast economic impact this will have on Alabama and the benefits this will bring to the Air Force,” said Senator Shelby.

RELATED: Essential workers to get discounted admission to U.S. Space and Rocket Center

Huntsville mayor Tommy Battle is enthusiastic about the new program. He said in a statement,

"The City of Huntsville, Alabama is honored that Redstone Arsenal has been named as the site for the United States Space Command," said Mayor Tommy Battle.

"We are grateful to Senator Richard Shelby for his confidence in Huntsville. Senator Shelby has been front and center of this space effort from its inception. As one of our nation’s strongest defense advocates and most knowledgeable leaders in defense matters, Senator Shelby recognized the value of a program that would focus on space assets and threats. It is his vision to protect our country in space with a dedicated command.

"We thank the U.S. Air Force site selection team for choosing Redstone Arsenal from its final six candidate cities. This group was meticulous in its review and assessment of potential sites, and they put us through the paces in their research these past two years. We will make you proud of your decision.

"The site selection team recognized what we know to be true - Huntsville is a natural choice. We are space. We do space. From the Redstone Arsenal installation to the Space and Missile defense assets that are here, Huntsville has been the leader in all thing space since day one. From the 1950s when Explorer I went into space to the birthplace of NASA, space is in our DNA. We have built the space infrastructure and technical expertise to lead this effort.

"The site team learned about the Redstone region’s proven track record in relocating military commands to our community. Army Aviation moved here in 1995 and Army Materiel Command moved here in 2011. Our low cost of living and doing business means the country’s tax paying dollar will stretch much farther, providing more valuable resources for our space effort and warfighter.

"We look forward to the partnership with U.S. Space Command and pledge to make them a success from day one."

Madison County Commission Chairman Dale W. Strong today issued the following statement as a result of the announcement Redstone Arsenal has been selected as the headquarters of US Space Command, bringing a projected 1,600 new jobs to the region.

"Once again, the selection of Redstone Arsenal for US Space Command demonstrates what regional partnerships can do when we collectively work together to reach our goals”. Chairman Strong added, “This objective process by the Department of Defense, and in the best interest of national security, thoroughly and objectively reviewed workforce, transportation, force protection, and quality of life. I congratulate all of our local, state, and federal leaders from Alabama, particularly United States Senator for Alabama Richard Shelby for his leadership and work to bring Space Command to Alabama, along with our neighbors in Tennessee that have worked together to prove Redstone Arsenal is the true and best choice for the United States Space Command Headquarters.”

The Department of the Air Force said it conducted virtual and on-site visits in order to assess which of the six candidate locations being considered would be the best to host the new headquarters.

In the announcement, the Air Force said Huntsville compared favorably across more factors than any other community being considered. Some of the reasons listed were a large, qualified workforce, quality schools, superior infrastructure capacity and low initial and recurring costs.

The final decision for the location of the headquarters is expected to be made in spring 2023 following the results of an environmental impact analysis.

An earlier version of this story was originally published on alreporter.com.