Juneteenth in San Antonio: How to commemorate the end of slavery

For many, the holiday is both a time of reflection and a time of celebration. 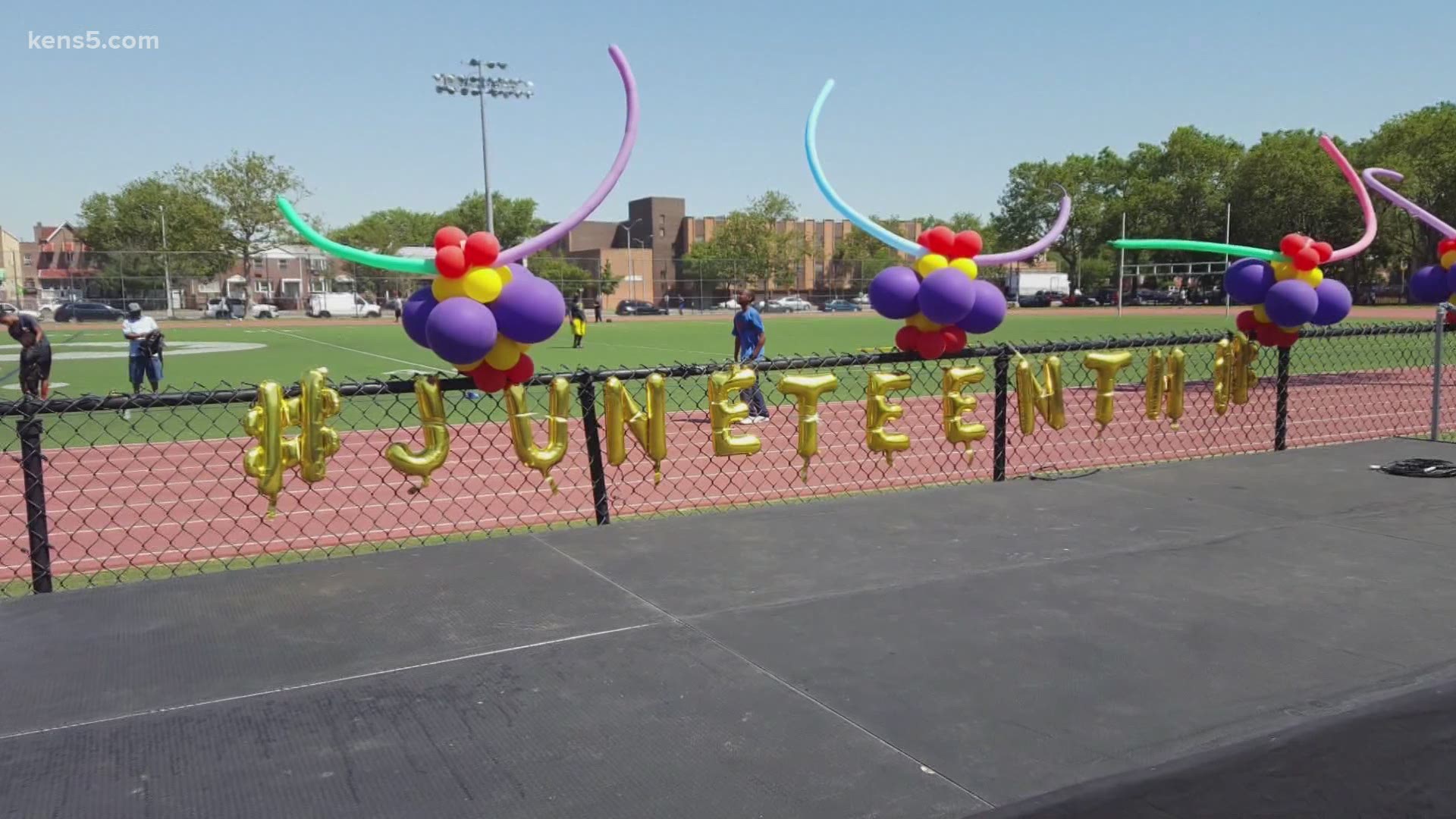 SAN ANTONIO — This Saturday is Juneteenth, the anniversary of the official end of slavery, and several organizations are offering ways to honor the holiday here in San Antonio.

The official end of slavery happened on June 19, 1865. On that day, federal troops arrived in Galveston, Texas, to take control of the state and ensure that all enslaved people were freed. That was more than two years after President Abraham Lincoln signed the Emancipation Proclamation during the Civil War.

For many, the holiday is both a time of reflection and a time of celebration. In San Antonio, the day will be commemorated with live music, a health fair, and events honoring the Black art community.

“Not all of us know our whole history. Basically, Juneteenth is the day Texas slaves found out they were free, two years after the emancipation was signed June 19th, 1865,” community organizer B. Michelle said.

Even though it’s been celebrated by many for so long, this year will be the first year it’s officially being recognized as a paid city holiday in San Antonio thanks to a town hall meeting last year.

“One young lady actually asked the mayor if Juneteenth could be recognized as a holiday like Fiesta,” Community Activist Neka Cleaver said.

A week later, a proclamation was signed by San Antonio Mayor Ron Nirenberg officially recognizing it as a city holiday.

“It’s been a long time coming, and I think as part of a national movement to understand, and to appreciate and in some way rectify the complexity of American history,” Mayor Nirenberg said.

Below is a list of Juneteenth events in San Antonio:

Juneteenth discussion at the McNay

The discussion is Wednesday, June 16 at noon. Registration closes two hours before the program starts. Click here to register.

On Thursday, June 17, Black Freedom Factory (BFF) will be hosting Future is Freedom: Juneteenth Celebration. This event will feature live musical performances, speakers, vendors, and Tony G’s Soul Food cuisine, according to a statement from BFF.

Movie and discussion: Walk on the River

The speakers will begin at 7:30 p.m., followed by a viewing of the movie at dusk. This event is free and open to the public. Folding chairs will be set out. Blankets and snacks are welcome but alcohol or coolers are not permitted.

Visit this website for more details and a lineup of music.

The Art of Four will host the first Juneteenth Event at Legacy Park on Saturday, June 19th from 6:00 pm - 10:00 pm. The community is invited to recognize and celebrate the rich history of Texas' emancipation. It will celebrate San Antonio's African American artists, musicians, and institutions, providing a multi-sensory and educational experience for attendees.

Confirmed performers and participants include: