A KVUE photographer saw crews with the City and police cleaning up and throwing away tents outside Austin City Hall. 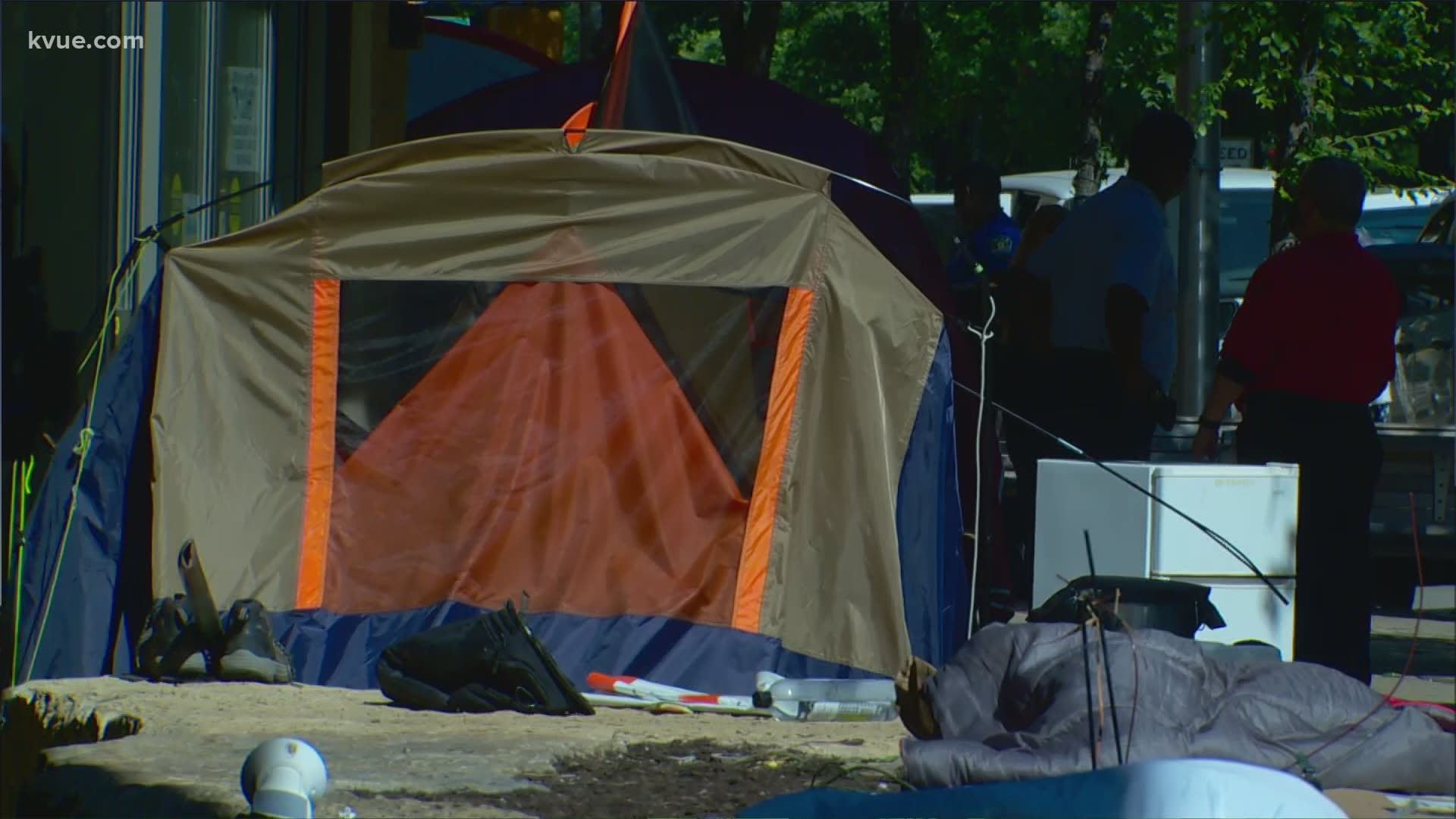 AUSTIN, Texas — Tents outside Austin City Hall were seen getting cleaned up and thrown away Monday morning. KVUE can confirm that some of the tents on scene belonged to protesters, while some belonged to those experiencing homelessness.

A KVUE photographer on June 14 saw crews with the City and the Austin Police Department cleaning up and throwing away tents outside Austin City Hall.

Officials said seven people were arrested. Offenses include interference with public duties and failure to obey a lawful order.

This comes more than a month after voters approved a homeless camping ban. Phase 2 of the City of Austin's plan to begin the recently reenacted ban on homeless camping across the city began on Sunday. Phase 2 means Austin officials will start issuing written warnings and citations to those in violation.

Warning: The video below may have inappropriate language:

According to a City of Austin spokesperson, police and other City departments are working on cleaning up the tents on the corner of Guadalupe and Cesar Chavez streets because of planned construction. The City and police said they have been warning the people camped in the area for about 30 days.

“Members of the Homeless Outreach Street Team (HOST) and APD’s district representatives have met with people around City Hall to inform them about the upcoming construction," the statement read. "This morning APD officers have been talking to people staying in tents in this area and have informed them that they are required to move. Downtown Austin Community Court is providing access to violet bins for people to keep their personal belongings safe. Those who refuse to comply with the direction may be given a citation for violating the camping ordinance, or be placed under arrest if they fail to comply."

1 / 7
JP Harrington
The APD is clearing tents near City Hall since the area has been designated for construction. Phase 2 of the city's homeless camping ban enforcement started Sunday

A City spokesperson told KVUE the Austin Transportation Department for weeks has been planning to make essential bike, pedestrian and transit safety improvements to this specific intersection.

"Work includes modifying the existing curb line on the northeast corner of Guadalupe Street at Cesar Chavez Street, rebuilding the curb ramp at that corner, and repairing the east/west crosswalk at that location," the spokesperson said. "Additionally, the curb ramp on the southwest corner of Cesar Chavez at South First Street will be rebuilt to help bicyclists access the cantilevered shared-use path on South First bridge. Construction will begin by June 21 and is expected to take about a week to complete. Traffic control barriers will be installed for the duration of the project to ensure the safety of the public."

People along the north side of City Hall, "who are trespassing on private property," were asked to move. These individuals have already received previous requests to move, the City said.

However, the question"Where do people go?" is still one that doesn't have a clear answer.

"We owe everybody an answer to that question. And, right now, as we see some of the enforcement happening, not being able to answer that is trauma-inducing for everyone, mostly and more importantly, for the folks who are being asked to get their stuff with no place to go," said Matt Mollica, the executive director of ECHO.

Mollica said having to move from place to place is not only traumatic but it can also lead to longer amounts of time on the street. He said communication should be a priority when it comes to the implementation of the camping ban.

"If we had any indication that something was going to happen on Monday morning, we would have told them, and we would have been able to talk and troubleshoot some problems where folks could go or they could start to make a plan," said Mollica. "But that's the key. The key is going to be really transparent communication about this. And we haven't got off to the best start."

The City said it is looking at increasing temporary shelter capacity and creating designated campsites.

“At the same time, we are focused on aggressive expansion of long-term stable housing for people experiencing homelessness through the initiatives like HEAL, creation of new permanent supportive housing resources, and partnerships with critical community organizations," the City statement read. "Following voter approval of Proposition B we are phasing in the new ordinance prohibiting camping on public property across Austin.”

'Loved by his family, friends and everyone who met him' | Man dies from Austin mass shooting on Sixth Street