Goodbye 2020: Taking a look back at this year's headlines in the Coastal Bend

As this year comes to an end, we wanted to take a few moments to look back and revisit some of the events we covered over the past 12 months in the Coastal Bend. 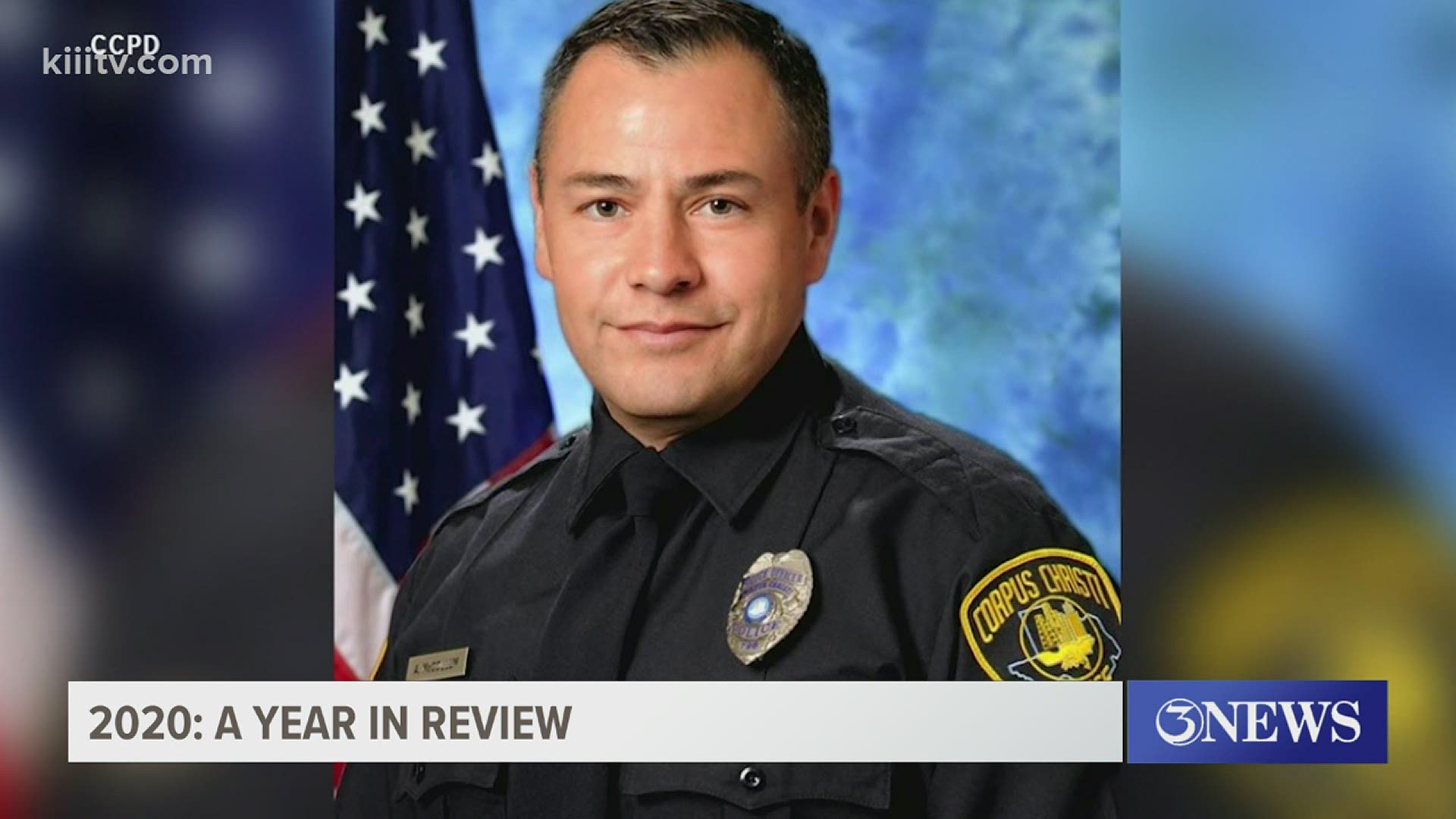 2020 started off remembering a hero in the Coastal Bend; Corpus Christi police officer Alan McCollum’s life was tragically taken following a traffic stop on Highway 358. McCollum and another officer were struck by a drunk driver.

McCollum a decorated U.S Army Veteran was a true hero. A valued member of the Corpus Christi Police Honor Guard and the city's SWAT team. McCollum also one of nine officers who risked their life to rescue a man from a burning car during a fiery accident on New Year’s Day 2019.

In March the coronavirus pandemic seen around the world finally reached the Coastal Bend.

“We knew this day would come, we prepared for it. It’s here and everyone here, everyone behind me and so many more that couldn’t be here with us today are dedicated in this unified effort and we will beat it,” said Nueces County Judge Barbara Canales.

Since March the number of coronavirus cases began to increase in the Coastal Bend.

There was a period of quarantine, the state closed only to re-open in June as the roller coaster ride with COVID-19 continued.

The coronavirus pandemic wasn’t the only major headline of 2020.

It was in May when a terror attack hit our naval airbase. 20-year old Adam Alsahli approached the north gate of NAS- Corpus Christi firing a weapon at a sailor guarding the gate. The guard activated the security barriers preventing the shooter from getting onto the base, Alsahli was killed.

Later that month community members came together in front of city hall in honor of George Floyd and others in the Black Lives Matter movement who have been a victim of police brutality.

It was in July when the 2020 hurricane season came roaring into the Coastal Bend with a vengeance. The national weather service was running out of names as storm after storm headed toward the gulf coast.

Category one Hurricane Hanna was the first storm in 37-years to take out Bob Hall Pier.

The pier was not the only thing damaged by Hanna. One family was left without their home.

“I spent a lot of time rebuilding that boat and that’s the home I was able to build to get custody of my son and its gone, it’s gone,” said Ray Maddox.

“This was the tidal surge on Friday as Beta pushed water to the top of the seawall and in a rare instance all the way over the top or the Packery Jetties and as the water came in, it moved the sand,” said Jason Cox.

Not only did two hurricanes make way through the Coastal Bend but so did two explosions.

Five people lost their lives, six others seriously injured after an explosion rocked the inner harbor at the Port of Corpus Christi in August.

Video shows the aftermath from the blast as the Waymon Boyd Barge, owned by Orion Marine, struck a leaking underwater natural gas pipeline and sparked an explosion.

Several lawsuits have since been filed against the company Orion.

It was on December 5th when seven workers were seriously injured in an explosion at the Magellan Midstream Terminal in Corpus Christi.

The workers were cleaning a crude oil storage tank when the explosion occurred.

Although COVID-19 and many other events hit us hard this year, the coastal bend still came together as a community stronger than ever.

From neighbors helping neighbors, to spreading joy during holidays and continuing traditions despite challenges the Coastal Bend may have had a challenging year, but we got through it together.