Protesters marched around the Williamson County Courthouse chanting “No justice, no peace.” Sheriff Robert Chody and deputies were seen marching with them. 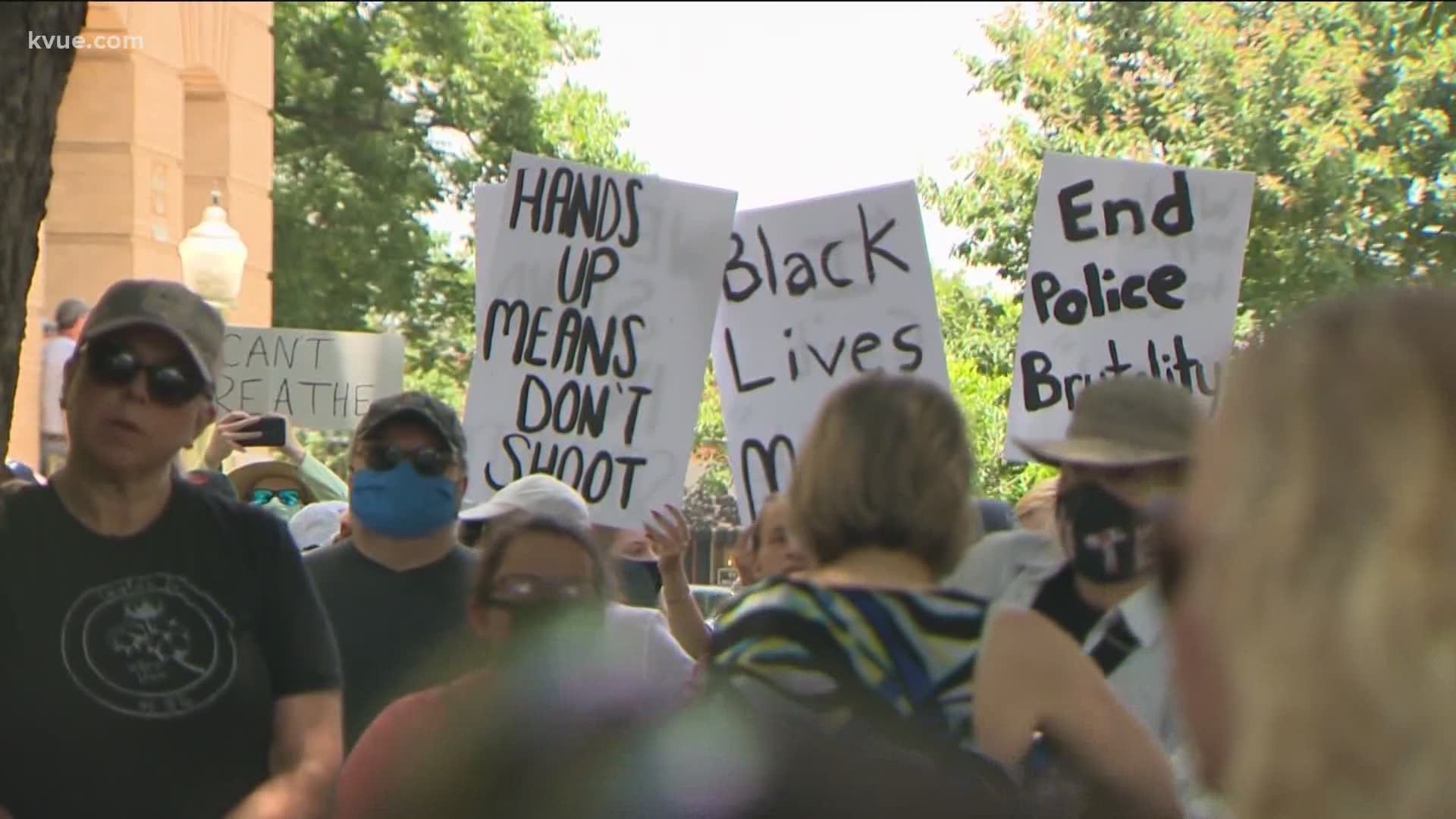 GEORGETOWN, Texas — Editor's note: The video published above is Bob Buckalew's report: The Backstory: The social upheaval of 1968.

A protest in response to the death of George Floyd took place in the city of Georgetown, Texas, for June 3 at 1 p.m.

The event took place in the Georgetown square in front of the courthouse. According to the event's Facebook page, the protest is happening to unify the community and build a better future.

RELATED: Why did the protests become more peaceful in Austin?

As of June 3 at approximately 10:45 a.m., 76 people said they were going and 311 marked that they were interested in the event.

Additionally, the Facebook page said that looting and vandalism will not be tolerated and that this protest is purely about bringing awareness to the Black Lives Matter movement and police brutality.

KVUE's Kalyn Norwood was live from the protest with updates:

#HAPPENINGNOW: Protesters in #Georgetown marching around the Williamson County Courthouse chanting “Say his name, George Floyd.” Kalyn Norwood is there.

RELATED: 'It just takes away from the message': Austin Justice Coalition responds to looting, fires over the weekend

According to the events organizer, the protest has the Georgetown Police Department's full support.

“We’re hearing what they’re saying and we’re willing to do more than just talk from a Twitter page, but to come personally and to hear what they’re grievances are and concerns are at a local level and see what we can do,” Chody told KVUE.

#HAPPENINGNOW: Protesters in #Georgetown marching around the Williamson County Courthouse chanting “No justice, no peace.” @SheriffChody and deputies are seen marching with them. #GeorgeFloydProtest @KVUE pic.twitter.com/Dj4sDbwFRZ

Protesters said marching was important to stand in solidarity.

“After what happened to George Floyd and what happened to countless, countless black people who have been brutalized by police ... it’s time that everyone who is physically able comes out and shows that they’re fed up,” Zleey Martin, protester, said.

“What’s taken place is a tragedy, but it also it opened eyes to what is going on… because he wasn’t doing anything that would hurt anybody," Chadley Jackson, another protester, said.

Police Chief Wayne Nero with the Georgetown PD was also at the march.

"I’m honored to stand with our community as we protest the injustices and racism so prevalent in our society. The prayer event Sunday is particularly poignant: We need prayer all the time, but especially now, when so much of our community is hurting and angry and scared.

These protests are for a just cause that must be heard, and I want the community to know that we are listening. We, as a government and as a community, have much more work to do to acknowledge and address the inherent racism in our city. We won’t get there, we won’t see real change, without one another, without our whole community joining together.

On Wednesday, Chief Nero spoke with community leaders to help identify challenges here in Georgetown and a path forward. We anticipate additional community conversations in the coming weeks. We hope you’ll join us.

I support the Police Department’s continued efforts to engage and build relationships with every part of our community. We must open our minds, our ears, and our hearts to every voice in our community, so we can move forward, together, to make Georgetown a better place."

Two more events are being held this weekend:

A Prayer for Black Lives Lost to Police Violence