Shipments of the Pfizer vaccine started arriving in the Alamo City Monday. Health care workers and first responders are the recipients of the initial doses. 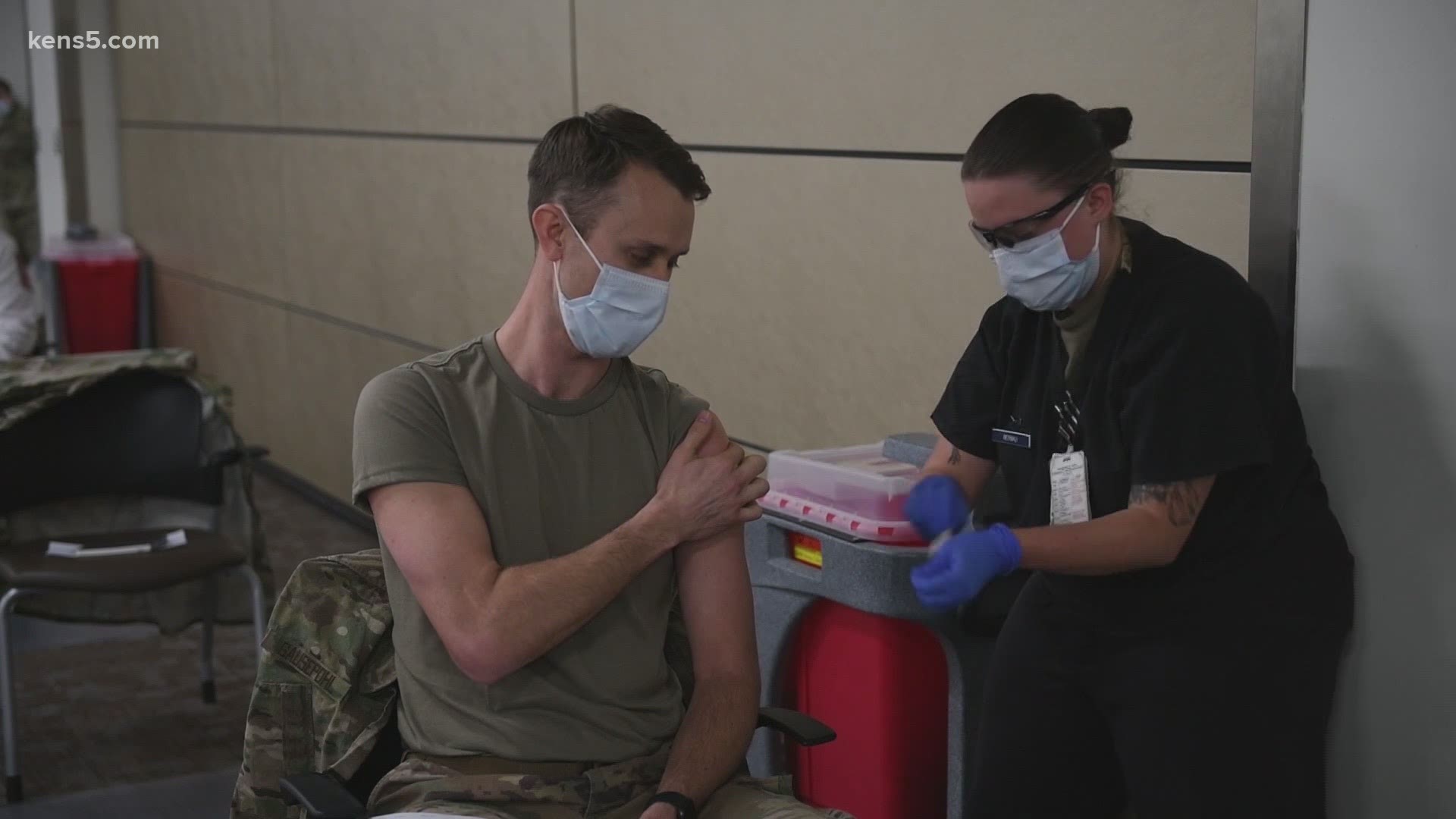 SAN ANTONIO — Frontline heroes in San Antonio are getting coronavirus vaccines this week.

Shipments of the Pfizer vaccine started arriving in the Alamo City Monday. The San Antonio Military Health System is one of the 150 sites across the country vaccinating medical workers after receiving a shipment of the vaccine.

Health care workers and first responders comprise the highest-priority tier of recipients, and were injected with the initial doses. Those vaccinated on Monday and Tuesday are in contact with patients on a daily basis.

The 59th Medical Wing received the doses at 9:30 a.m. Monday and put the vaccines in a -80 degree Celsius freezer. They’ll keep the doses there and, over the course of this week, transfer some to the Brooke Army Medical Center.

The first person to get the vaccine within the San Antonio Military Health System was Andrew Gausepohl, medical director for the 59th Medical Wing Family Emergency Center.

Gausepohl said his arm was a little sore Tuesday, but that was the only response he’s had to the vaccine so far.

The San Antonio Military Health System expects to receive shipments of the vaccine about once a week.

UT Health San Antonio was also busy with healthcare workers getting vaccinations Tuesday. The site received a shipment of nearly 6,000 Pfizer doses of the coronavirus vaccine Monday, and were the first to confirm the receipt in the Vaccine Allocation & Ordering System (VAOS) for the State of Texas.

A day later, doctors and nurses rolled up their sleeves at the university's nursing school. Dr. Adelita Cantu was the first UT Health San Antonio team member to get her vaccine.

She said the arrival of the vaccine is a huge step on the path toward the end of this pandemic. Cantu wants San Antonio to know the importance of getting the vaccine once it’s available to the public and said she is honored to show that it is safe.

“We’re fighting a war (in which) we can’t see the enemy and we have to really pull together,” McKeel said. “It’s not just protecting yourself, but protecting everyone else. I worry about my mother, I worry about other people, so I’m doing my part.”

He will get a second dose of the vaccine in about three weeks.

“This is the most ambitious vaccination campaign in all of world history and we’re thrilled to be a part of that here in San Antonio,” Leverence said. “First we’re going to be immunizing our health care workers; they’ve been working as heroes for the past 10 months. We truly want to keep our healthcare workers safe and this is a part of doing that for them.”

The vaccine is not being offered yet to the public. UT Health San Antonio will notify patients once doses are made available, which is expected to be in a couple months' time.